It’s generally believed that there’s one man to blame for the pushing against an invisible wall nonsense, king of the mimes Marcel Marceau. Although he inspired a whole movement of people standing on buckets in the street pretending to hardly move, it turns out he actually did some good too, as this thrilling film reveals. 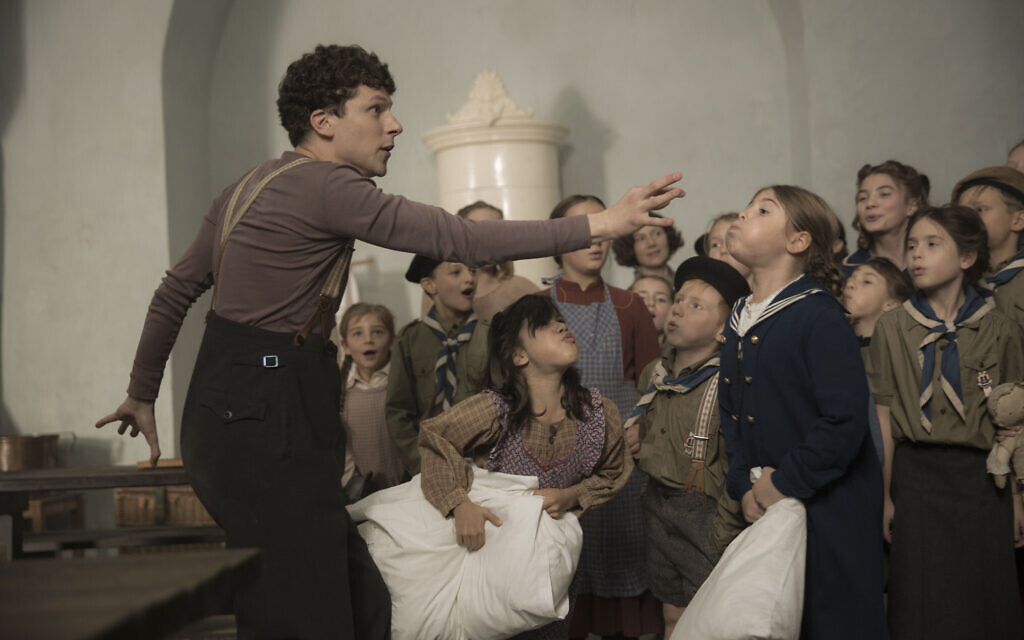 Blow harder child, I can still feel my fingers are sweaty.

Although many would consider being an apprentice to your father in his butcher’s shop as a solid occupation in Strasbourg, France, Marcel (Jesse Eisenberg) dreams to entertain. He performs of an evening in cabaret, acting out scenes without words. To his father, he’s nothing more than a clown, but Marcel takes his art form tres seriously.

But with the war getting ever closer, the nation’s mood changes, with fear overriding any other emotion. Marcel only really notices this when over a hundred orphaned children, all of whom have had their parents murdered, transported to Strasbourg for safety.

To help do his bit, Marcel performs for the children, helping to distract them from the horrors of war. But when it became apparent that the Germans were on their way, Marcel decides that he can’t just sit back and watch, and that he will join the French resistance, alongside his close friend Emma (Clémence Poésy), in an attempt to keep the children safe. Although Marceau has become somewhat of a figure of ridicule – which is understandable for anyone who pretends to walk into a gale for a living – it transpires that he was a bit of a hero in real life. Perhaps it shouldn’t be a surprise that this heroism is little known about the man, he was a mime after all and therefore not terribly chatty, but Jonathan Jakubowicz’s film certainly shines a new spotlight on his life.

Of course the Venezuelan director acknowledges Marceau’s passion for mime, but thankfully it’s kept to a minimum. Instead the focus is on his remarkable concern for all the orphans that were dumped on his doorstep, and his incredible courage to do all he could to get them to safety.

Kudos to Eisenberg, who follows up his turn in the enthralling Vivarium, with yet another low-budget, indie affair, that is rich in characters and story. In truth, there’s very little for him to do, besides dabbling a tad in the dark arts of mime, as all the energy comes from the compelling narrative.

To help make it that little bit sharper is a strong performance from Matthias Schweighöfer, who is both chilling and sublime playing Gestapo officer Klaus Barbie, managing to increase the sense of pending peril tenfold in every scene he’s in.

It also goes to prove that just when you think you’ve seen everything about the war on film there is to know, this gem of a story makes a quick dash to victory to our screens.

It may not change your opinions about mime – nor should it – but after watching this fascinating and gripping film, certainly feel free to tip your invisible hat to a remarkable man and his incredible feats of bravery.