As a franchise, Ridge Racer has been knocking about since the mid-nineties on consoles. Although it could never really be considered a premium racing title, fans of the series have been loyal enough to keep it going for all these years.

Its unique selling point has always been its drifting. Drift enough around corners builds up your boost allowing you to go whoosh on the straights. It's hardly rocket science (although the boosting bit probably is). It's a formula they've stuck to all these years and this latest iteration of the game is no different.

But Namco have cottoned on to the fact that the series has definitely begun to decompose of late. It's beginning to feel real tired now and it's really time for something to happen. Anything to happen.

But if this game is anything to go by, Namco are clearly resistant to change.

Their idea of injecting the series with something fresh and funky is thus: a number of destructible environments. And that's about it.

Yes, throughout the tracks, there are a number of buildings, billboards, petrol tanks etc that can be crashed through. In theory this gives you a points boost as well as an advantage over your competitors. We're not sure if anyone at Namco actually played the game before its release, but it doesn't really work out that way.

More often than not, boosting through one of the buildings will give you a distinct disadvantage; this could be as simple as placing you further down the race order than you were before you went through said building, or even worse, end up in a far from ideal situation. How much worse could you be? Well, landing in a car park, facing a wall, where the only way out is to actually do a 3-point turn to get back on track. That's right, a bloody 3-point turn. How's that sound for a short cut to you? 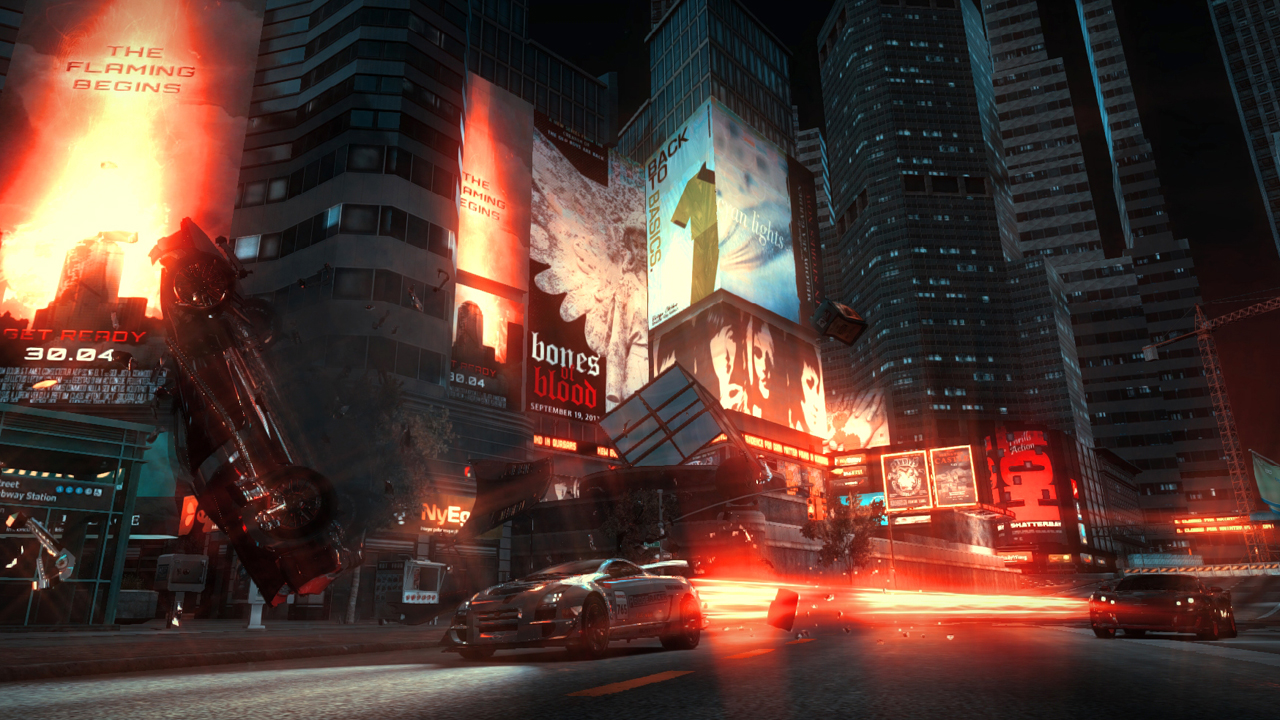 But at least you can rely on the drifting right? The staple diet of any Ridge Racer game. Wrong. Namco have seemingly taken a control system that was far from broken, and gone and broken it.

In Ridge Racer games of old, the ability to drift was bordering on the effortless. If you took a corner, pointing your joypad in the opposite direction, your car would drift. This version however, adds a button press into the mix. Whether it's all down to this one lousy button, or possibly something else, the drifting is now a right royal pain. What was once smooth is now jagged and disruptive.

And then there's the AI. In any given race it feels like whether you win or not is more down to chance than skill. You could come last in the same race nine times out of ten, but finish first at the tenth go by doing nothing discernibly different. A lot of the times it felt like if you managed to get to the front as soon as possible, the greater your chance of staying there throughout. There are no guarantees though, as many of the courses truly hate you.

The Ridge Racer franchise isn't one known for its personality, but at least there's been an element of fun about the games. Not any more it seems. So if a game happens to be devoid of fun and a personality, it had better have some ace up its sleeve. Sadly this one doesn't.

One other new element that doesn't really work is this fragging business. To pass certain events you have to destroy a number of cars. To frag a vehicle you basically boost into the back of it. It may have worked like a charm in the Burnoutseries, but it's implemented so poorly here, that the whole thing is a sorry embarrassment.

To make matter worse, there's this sheer randomness to being 'fragged' by other cars throughout the entire campaign; at times it feels like a car can just honk its horn from behind to make your vehicle go up in flames.

The ironic thing is however, if you put the whole disastrous drifting element to one side, the majority of the cars handle remarkably well. And some of the circuits are visually attractive to drive around, with some pretty impressive lighting in places. It's just a shame that despite there being nine locations to visit, with each one boasting seven events to unlock, there's a lot of repetition amongst the locales. After a while one urban street looks pretty much the same as any other.

And just when a game lies laying in the gutter from such a kicking, there's one more kick to the head to come  its title. Surely just another numeric at the end of it would have been preferable to sticking on the word 'unbounded'. It may well be a proper word but there's no getting away from the fact that it's an awful one. What's next  unleashableness?

It's understandable that any long-standing franchise would feel the need to tweak a series in order to keep its audience happy, but the road Namco have gone down with the latest version of Ridge Racer must surely be considered a dead end.