Whats the first thing you think of when you think of Barbados? If its rum, then, despite having a possible drink problem, you may not be aware of its most recent export: Rihanna. 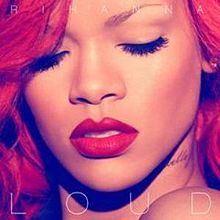 The young Barbadians style of music is often described as R n B; thats a little like calling Paris Hilton an actress, i.e. not wholly accurate. If her fifth album Loud is any indication, Rihanna plays pop, with a hint of R n B. Its about as commercial as you can get, not that theres anything wrong with that. But even if you put a shovel in a thong, its still just a shovel. A pretty shovel, but a shovel nonetheless.

Theres a certain energy to the opening of this album with S & M, where Rihanna sings about being bad, the smell of sex in the air and being excited by chains and whips. Obviously theres a line that not ought to be crossed where rough sex is concerned  just ask Chris Brown. Its high tempo and a bit on the grimy side, but not a bad start at all.

The second track is the first of her collaborative efforts, with Drake helping out with Whats my Name?. Its produced with polish, with some leftover trance effects that work nicely.

Its not completely clear, but Cheers (Drink to That) almost sounds like an admission of alcoholism. Rihanna would apparently drink to almost anything. If you ever find yourself in the position where she invites herself around to your place, its advisable to have a firm lock on your drinks cabinet. Whatever else you do, you should most definitely listen to this track responsibly.

Fading is a vacuous, lightweight song, just filling up a little time until the next track.

The first single Only Girl (in the World), is the kind of high energy effort that sadly isnt indicative of the rest of the album; its sassy, bold and definitely a floor-filler at a trashy club near you.

Rather worryingly, California King Bed is the kind of song that you can expect over half of next years X-Factor hopefuls to be singing during the audition stage. Its that bad. Its an overblown ballad that will speak to you on an emotional level if youre a thirteen year old girl and make anyone older than that feel positively queasy.

Not only providing a rare indication of her background, but also the stand-out track of the album is Man Down. Rather refreshingly, its the track that makes Rihanna sound less like shes fallen off the conveyor belt of bland US female vocalists. It doesnt hurt that it's also a little reminiscent of Black Uhurus classic What is life?.

As far as ballads go, Complicated is a better effort, working to Rihannas strengths not weaknesses.

Bringing things to a close is Love the Way You Lie (part II) which is pretty enough, but could so easily have been sung by Avril Lavigne, Pink, or any other US artist. It does feature Eminem though, but he must have written his rap in a hurry as hes not exactly at his sharpest, with some of the laziest rhymes hes ever sung; he does get to shout a bit though, which is always nice.

Loud is at its best when Rihanna puts more of herself into the songs; where it suffers is when shes an indistinguishable voice in a very large crowd of American female vocalists. If she just remained true to her roots, she would at least have something original to offer. That said, commercially at least it hasnt done her any harm. Loud is already selling like cold beers on a hot day, but whether its something the Barbadian singer can be truly proud of, remains to be seen.