The character Robin Hood is one of the most enduring in cinema history. He has been knocking about since 1908, and was made famous in the early days by the likes of Errol Flynn and Douglas Fairbanks (Snr).

In recent times, audiences have been treated to the likes of Kevin Costner and Russell Crowe donning green tights and running around Sherwood Forest for larks.

Having taken to the slopes in Eddie the Eagle, and donning the glasses as Elton John in the up-coming Rocketman, Taron Egerton hoods up to join the many merry men to play Robin of Loxley. I told you, I want to be known as BIG John.

Despite being lord of his own manor, Loxley (Egerton) finds himself drafted by the Sheriff of Nottingham (Ben Mendelsohn) to take part in the crusades, and is soon fighting in a far away land for king and country. It’s not great timing, as he’s just hooked up with Marian (Eve Hewson), but a lord’s gotta do...

After witnessing the horrors of war, he returns, some years later, to his home. The problem is, the pesky Sheriff has ransacked it for contributions to the cause – namely his – and little is left of his fancy home.

To add insult to injury, just as his heart soars seeing Marian for the first time since returning, it quickly plummets again when he sees her in the arms of another man. Ouch. She’s not fully to blame however, as not only had he been away for a number of years, he was also declared dead.

To take his mind off of things, he decides that the Sheriff has gone too far, and it’s time to do something about it. So with the help of others, who may or may not be merry, Robin decides to steal from the richest man in the land, but what to do with the spoils? 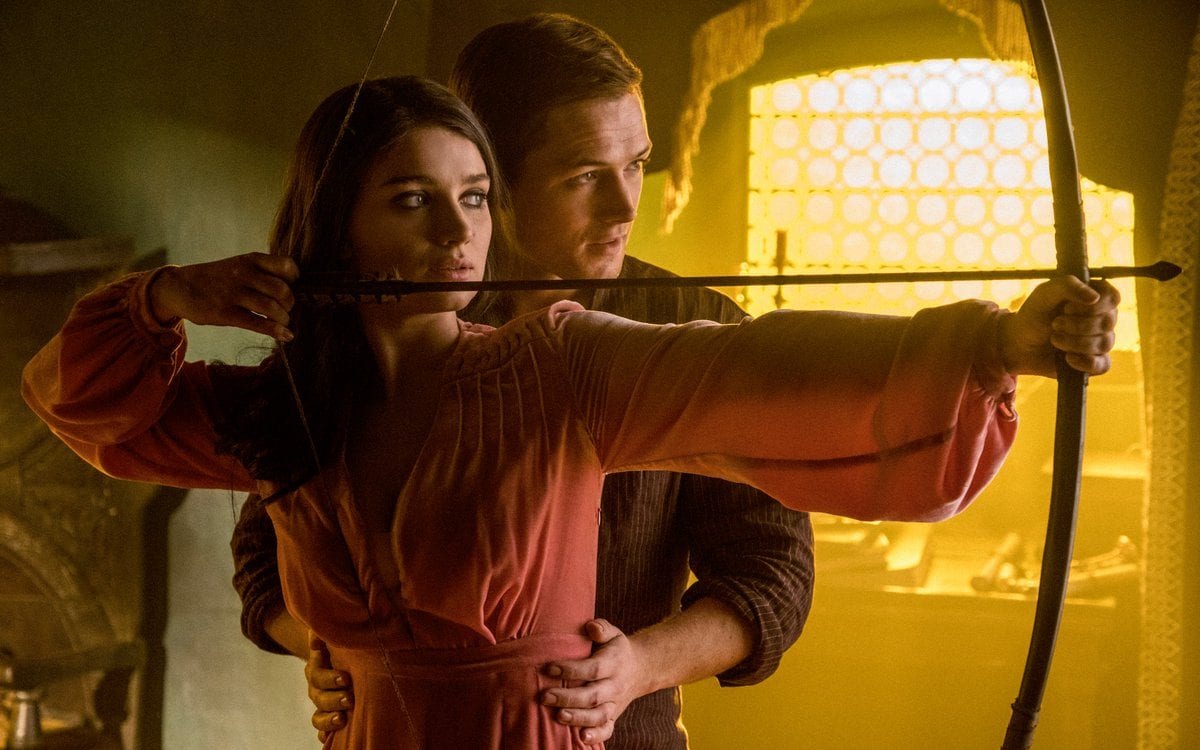 She was definitely going to pay a visit to HR after this lesson.

Now if you’re going to re-tell a tried and tested tale, then you need a fresh new angle to come at it at, right? English director Otto Bathurst pitches his first big screen outing as more middle earth than middle England, just without the beasties. It looks not of this world, which is a little unfortunate considering it’s supposed to be set in the county of Nottinghamshire, which to the uninitiated is a real place, and therefore is unlikely to have ever resembled the Shires that hobbits inhabited. To that end, he should have really pushed the long boat out and set it in space.

But it’s not just the setting that got an unnecessary upgrade. Robin is more Green Arrow than Oliver Queen is, as he moves with the agility of a ninja across Hobbitland AKA Nottingham. His merry men have also had to meet current cultural diversity targets, including Jamie Foxx playing Arabian Yahya, AKA Little John, and Aussie Tim Minchin as Friar Tuck. It’s a curious band for sure, but by no means the film’s biggest problem.

Fellow Aussie Mendelsohn gives a competent audition as a Bond villain – albeit dressed in a futuristic costume a la The Hunger Games - but like the rest of the film, feels completely out of sync with the source material.

On this poor showing, Bathurst was completely out of his depth on every level from the off. His take on Hood is like a comic Multi-verse existence; there’s a brief whiff of familiarity there, but just not enough to buy into the whole concept. It was a brave challenge, but one that he failed at miserably.

The only merriment to be found here then, is in the relief found in the end credits rolling, with the added bonus of there not being a bar of (Everything I Do) i Do it For You to be heard.