In 1987 Dutch director Paul Verhoeven made a name for himself with his second English language film, RoboCop. It was essentially a mix of First Bloods Rambo and the Terminator, riveted together to represent the future of law enforcement.

It was futuristic looking and, probably more importantly, it had a high body count which audiences lapped up. It enabled Verhoeven to go on to direct such box office beauties as Total Recall and Basic Instinct before it all went sour with stinkers Showgirls and Starship Troopers. Still, it was Robocop that got Hollywood's attention.

Hoping to follow somewhat in Verhoeven's footsteps is Brazilian director José Padilha, who after directing two Elite Squad films in his home country was handed the responsibility of recharging the RoboCop franchise with this, his first English speaking film.

In the near future, the US army have an impressive weapon with which to fight terrorists on foreign soil: robots. They are not stumped by the occasional moral issues that human soldiers can sometimes face, as they see only if a subject in front of them is a threat or not.

OmniCorp, the company that produced this technology, are keen to have these robots patrolling the cities of the US as a way of combating growing crime. Unfortunately the US public don't trust them, which is why the government hasn't adopted them.

This isn't going to stop Raymond Sellars (Michael Keaton) though, as he pushes his scientists to come up with a solution that will appease the public.

Meanwhile cop Alex Murphy (Joel Kinnaman) is doing his best to clean up the grubby streets of Detroit, but is struggling to put a major crime boss behind bars. After a particularly bad run in, Murphy is so badly injured that the only noise he can hear is the sound of his body knocking on death's door.

Back at OmniCorp, Dr Dennett Norton (Gary Oldman) believes that he has solved the robot problem; what if they put a human in one so that the public can identify with them? Sellars loves the idea and tells him to go for it. Norton informs him however that he will need just the right kind of candidate for his prototype. News reaches them of a cop's near death experience and before you can say Robby the robot, Murphy is signed up for the programme.

With what's left of him scooped up and poured into his new robo-cup, RoboCop is born. Murphy is now more machine than man and proves to be the big hit that OmniCorp had hoped for. But with Murphy's brain still functioning, there is one murder more than any other that he is keen to solve  his own. 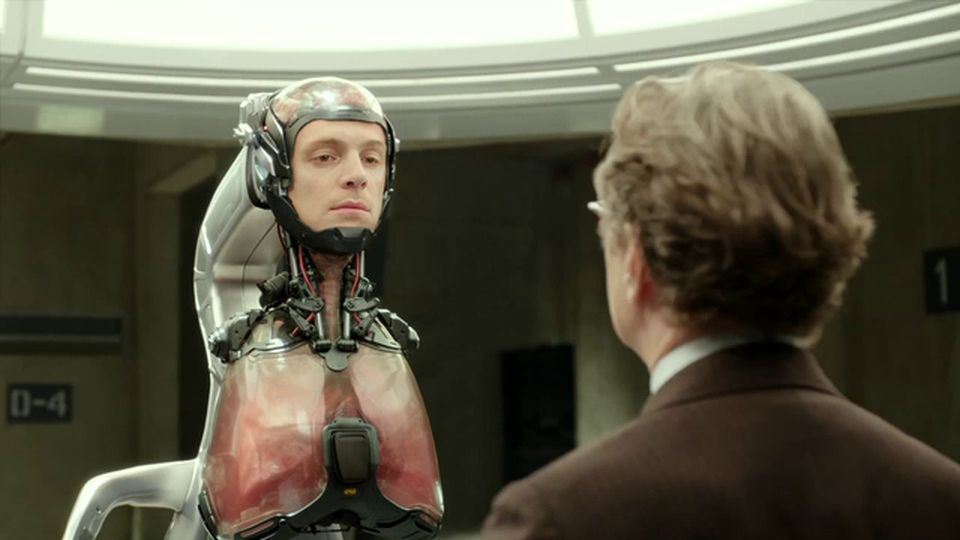 Erm, you do realise I only came in for a loose filling don't you?!

The term 'reboot' is now seemingly a credible alternative to 'remake', as if somehow making it more justifiable. But let's face it, a spade is just that, and this is still just a remake. And not a very good one at that.

Compared to the original, this latest version offers very little in terms of anything new. Essentially it's an origins story that pretty much sticks to the plot of the 1987 version. The suit looks a little more hi-tech  although the black version looks nothing more than a lame attempt at a superhero outfit  but it's very 2.0.

Where it suffers a downgrade from the original is in its content. The first was rated an 18 and its splendidly bloody visuals reflected that. Probably due to constraints from the studio (they make far more money from PG rated films), this version has been rated 12. A PG friendly RoboCop is like a PG friendly Freddy Krueger  what is the point, really?

The majority of the action sequences where we see RoboCop shooting his victims through his eyes, feel akin to watching someone else play a video game, and just as exciting. It's all very tepid and dull.

The director does well on the emotive side of things with Kinnaman conveying the human element of the film with great conviction, but is that really what you want to see in a RoboCop flick?

Because this is such a watered down version of the man-in-a-can, Padilha delivers nothing more than what seems like the pilot for a TV series. And yes, that's just as disappointing as it sounds.

In spite of all its new bells and whistles, this version is inferior to the original. This reboot frankly deserves the boot.