What do you do if you have a really successful franchise on consoles, but you want to make some noise on handhelds? Well, if you were the people behind Guitar Hero, youd release a rather silly add-on thats more likely to give you RSI than your rock on.

Thankfully, the peeps behind Rock Band have gone old school for this portable version on the PSP. Thats right, this is a gimmick free zone. And by old school we mean that developers Harmonix have gone back to their roots a bit, with this homage to their Amplitude and Frequency PS2 games.

The game starts off in familiar territory: youre in a start up band, you wanna make it big, play bigger venues blah, blah, blah.

You then have to take control of all elements of the band on stage: bass, drums, vocals and lead guitar. As the notes come down the screen, you have to hit the corresponding keys at the right time. The controls you use are the Left and Right on the direction pad and Triangle and Circle face buttons on the right. This gives you a similar feel to Amplitude/Frequency. 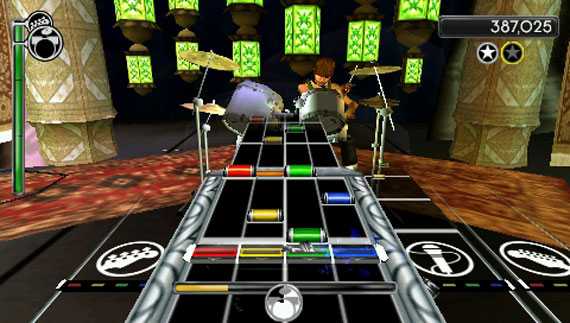 Can you feel it coming in the air tonight? You can't? Oh.

Another thing they borrowed from these games is the way in which you move from instrument to instrument. Simple  you just use the shoulder buttons. If you clear the section youre in, the next section will disappear too, allowing you to move to another instrument.

And thats basically it. There are just over 40 original songs featured, which is actually a nice mix of classic, rock and indie (with the likes of The Police, Billy Idol, Smashing Pumpkins and Queens Of The Stone Age all featured). The downside is, moving venue to venue as you do on your musical tour of duty, the same crop of songs come up time and again. If we hear The Whos Pinball Wizard again it will be too soon. However more will be available to download  at a cost, of course.

And the PSPs buttons hold up well to the barrage of bashing, possibly better than your fingers do after any length of time.

You may not be wielding a nice shiny plastic guitar, but this is the next best thing to get your Rock Band fix on the move. So top up your travelcard and prepare to rock, and possibly roll a bit to.