Ronsons latest journalistic jaunt opens with an intriguing mystery. A bunch of madness professionals around the world have been sent a copy of a book called Being or Nothingness. The recipients of this book didnt ask for it. There seems to be little to connect the recipients, apart from their interest in the mind. The book isnt something you can buy well, anywhere, and each copy is delivered with a handwritten note bearing the same message, implicating a person that claims to have no knowledge of the book.

The book itself is also a bit odd: words are only printed on every other page, and some words are cut out in what looks like some kind of pattern. Over time, through the magic of the internet, recipients of the book  all equally puzzled and with various theories as to why they received it and what its significance is  come together to get to the bottom of the mystery. Enter Ronson: one of the recipients is a fan of his work and invites him to investigate. So begins Ronsons meandering through what he terms the madness industry. 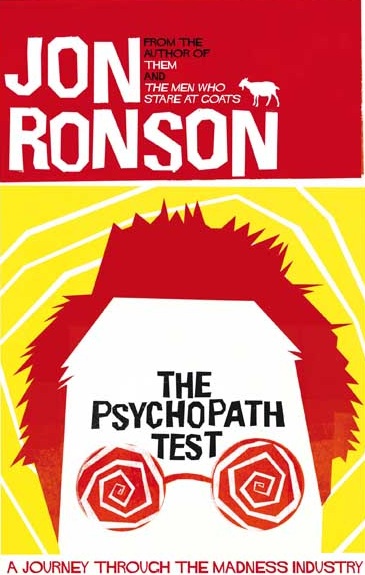 This journey introduces us to quite a few interesting characters. Via the Scientologists long-running campaign against psychiatry, we encounter a young British man committed to Broadmoor and labelled a psychopath, who maintains that he made it up all along in order to avoid going to prison for GBH. This chap  who the Scientologists hail as a perfect example of psychiatry gone wrong  claims to have got himself committed by drawing from his memory of filmic portrayals of psychopaths, even borrowing directly from fiction in his conversations with the psychiatrists in order to guarantee his incarceration in what he (perhaps wrongly) imagined would be a better option than prison. All this leads Ronson to engage with the central themes to this book: what is madness; what happens when a person is labelled a psychopath; and are the diagnostic tools that psychiatrists use to label a person a psychopath sufficiently robust to guarantee the right results  for the person and for society  every time?

Looking over his body of work so far, its not hard to see why psychopaths took Ronsons journalistic fancy. This is, after all, the man who gave us Them: Adventures with Extremists (described as a romp through the world of paranoid conspiracists) and The Men Who Stare At Goats (exploring the wonders of the New Earth Army, allegedly a unit of the US army that employs paranormal powers; this recently graced the silver screens starring Ewan McGregor, George Clooney, Kevin Spacey and Jeff Bridges).

Even though Ronsons prose might be an acquired taste  its rather like a strange hybrid of fiction and non-fiction with all the he said she said stuff  and his style of inquiry can seem a little superficial, it makes for an intriguing read. He invites us to consider the ways that psychiatry works to categorise people as mentally ill by investigating some of the core tools of the trade: including DSM-IV-TR (an 886 page textbook used by psychiatrists the world over to diagnose 374 known mental disorders) and Bob Hares psychopath checklist (anyone scoring over 30 out of 40 is labelled a psychopath). Armed with the psychopath checklist, Ronson sets out to figure out just how many people with unusual beliefs or in positions of power might be categorised as psychopaths according to these tools, with suggestive results. One is left with the over-riding sense that psychiatry can be fallible, that sanity is relative and that we should consider the power relations involved when we call some people mad and others sane (an argument that fans of French philosopher Foucault might find familiar).

The engaging premise and the wide selection of mad people that Ronson encounters in his journey through the madness industry more than compensate for his writing style, which might well be an acquired taste. If youre looking for a read thats both funny and serious, that makes you think and that makes you feel comparatively normal, youd be mad not to give this a try.