Getting from A to B can be quite challenging; after all, not all doors slide open when you approach them, and not all stairs move up and down.

It’s easy then to appreciate the obstacles Zee has to face, when he attempts to leave the mystical land of Croydon. No, wait – Samsara.

Samsara has a simple enough premise: get Zee from one point to the next. Ezee peezees. It’s in the games execution however, when things can get a little on the tricky side.

You start off moving from left to right, getting Zee to a glowing exit hole to finish the level. You don’t control Zee, only the path he takes to get out. To assist you there are a few wooden blocks, that can be rotated, then placed tactically to allow Zee to walk through the level without harm. Get it wrong and Zee will plummet to his death. No pressure then. 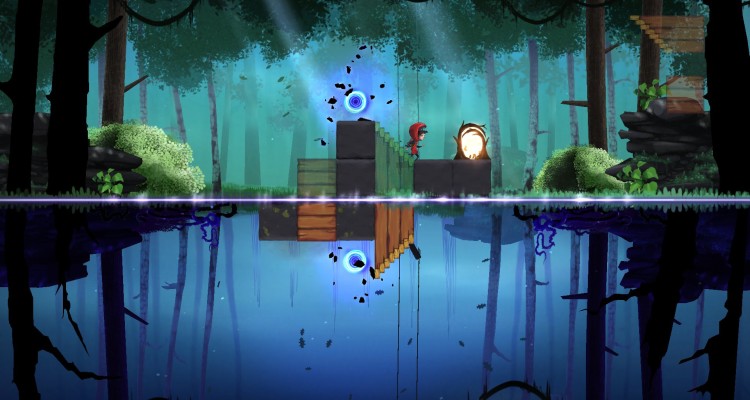 I only popped out for a Gingsters, how difficult should it be?!

It sounds easy, but gets more difficult when you take into account the amount of water there is in Samsara. The action takes place on two planes: above and below the water line. You can place the wooden blocks below the water line, so you’re basically placing them underwater, but their reflection appears above the water line – in a mirrored image – which effectively gives you two blocks for the price of one. It would make sense if the block on land cast a reflection into the water, as it does in real life, but there you go.

To make it more challenging, you only have a few blocks to play with, which should make it easier, as there must be fewer permutations, but it’s not. It’s really not.

Later on, as if getting Zee out in one piece wasn’t enough, his reflection pops up too, and you also have to consider his path to an exit with another glowing exit hole.

77 levels are crammed into six distinctive worlds, making Samsara a taxing experience that can slowly but surely have you doubting your intelligence, on a level by level basis. If you’re anything like us (hopefully you’re smarter, for your sake), it’ll have you scratching your head on numerous occasions, but there is a great sense of relief, and dare we say it achievement, when another level bites the dust. Which is just as well as you can’t progress any further until you’ve conquered the level in front of you.

At least the developers weren’t sadistic enough to have timed levels, so you can take your sweet time to solve the level in front of you. And you’ll certainly need to with some of them. You can also inverse the level you’re on, giving you the opportunity to assess the puzzle from a different perspective, without the need to turn your TV upside down.

The game’s art direction is both sharp and beautifully realised, and it’s just as well as you’ll be staring at it long enough in some cases. Although a few more elements are added the deeper you get into the game, like the appearance of Zee’s reflection, it can feel a tad claustrophobic and repetitive in places.

If you’re a fan of puzzles though, Samsara offers a pleasingly balanced challenge that will make your brain hurt if you let it. It’s lovely to look at, and after a few goes, really difficult to put (upside) down.