With Daniel Craig ready to hang up his Walther PPK for the last time with the eventual release of No Time to Die, rumours are rife as to who will be his successor to play the iconic James Bond.

One name that keeps bubbling to the surface is The Outlander star Sam Heughan; not only has he already auditioned for the role earlier in his career, he has also recently had his odds slashed by bookmakers to become 2-1 favourite to be Craig’s replacement.

There’s only one possible stumbling block that could prevent him from taking the enviable role, and that’s if 007 producers have sat in front of this abomination, because if anything could change their mind, it’s this. 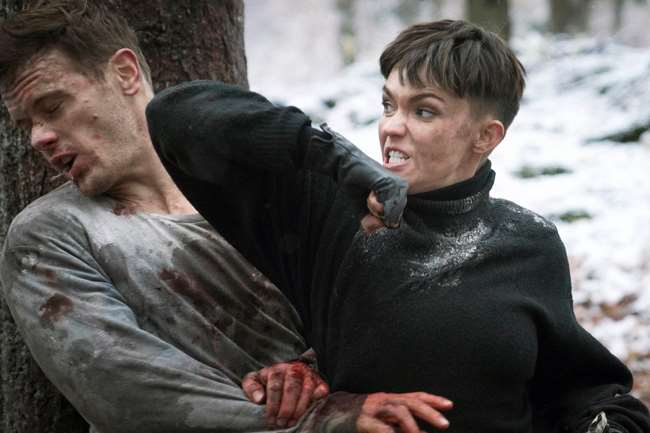 Take that back about my home-made Chicken Kiev!

After a mercenary squad known as the Black Swans were tasked with persuading a small European village to reconsider selling their land, only for it to turn ugly and result in huge casualties, the group leader, Grace Lewis (Ruby Rose) is issued with a red notice. This allows the best of the British military, the SAS, to apprehend her and her group, one way or another.

Meanwhile, SAS soldier Tom Buckingham (Heughan) has managed to put these troubles out of his mind momentarily, to concentrate on his personal life. He has planned a trip to take his girlfriend Sophie (Hannah John-Kamen) to Paris, where he intends to propose. With tickets bought they board the Eurostream train that will whisk them under the Channel, to their romantic destination.

As bad luck would have it, Lewis has also decided to let the train take the strain, but her dastardly plans don’t take her, her team, or the passengers on board even close to the French capital, choosing instead to stop in the middle of the tunnel itself.

If anything’s going to spoil a romantic weekend away, a terrorist attack on a train will do it, so Tom makes it his mission to make Lewis aware he’s not happy with the unscheduled stop, by putting his SAS training to good use.

Ahhh so I have the Bond auditions in my sights...

There is a widely known theory, known as the infinite monkey theorem, which suggests given enough time, a chimpanzee in front of a typewriter would produce one of Shakespeare’s plays. As far-fetched as that may seem, it wouldn’t feel out of the ordinary if it managed to knock this script out in the first ten pages, just before its first tea break.

Not only is the plot relying on the fact that an audience doesn’t believe that both protagonist and enemy randomly ending up on the same train service together as being too great a coincidence – it is – but also that really awful dialogue doesn’t get in the way of the action, when it does.

The notion that this script got green lit can only offer hope to the worst scriptwriters on the planet, because if this managed to get released, anything is possible.

Obviously Laurence Malkin, the writer of this mess, was just given a the brief to write Die Hard on a Train, which is clearly what the film wants to be. It’s unclear why Malkin was tasked with this job, considering his last writing gig was in 2006 for the swiftly forgotten feature Five Fingers, which he also directed. But he gave it his best shot and, it has to be said, his best was way off the mark. Way, way off. Not only is the story disappointingly generic, it comes across that perhaps Malkin may have spent all this time since his last gig, taking a vow of silence in an ancient monastery hidden in the Tibetan hills, where the only sound heard was that of the birds outside of his window. This is can be the only reason that the script has the kind of dialogue written by a man who hasn’t used or heard words in some years.

And then you have the 007 candidate himself; it’s fair to say that Heughan looks the part, physically at least, but Magnus Martens’ direction does him no favours whatsoever. Although the action sequences are adequate, Heughan struggles with all the bits inbetween, particularly those scenes that require talking, that make them just too painful to watch. If he is indeed set to be the next Bond, here’s hoping there’s enough time for him to actually learn to act again before the cameras start to roll.

Produced as a Sky Cinema Original, Sky were obviously happy to just throw a tonne of cash at the project, and have blind faith that Martens will deliver an action-packed thriller. At some point however, Sky are going to have to learn to watch some of the dailies from their projects, because this is how wrong a project can go without any quality control.

What it does manage to get right however, is to pay homage to the terrible b-movie action flicks of the eighties, which just may eventually give it some kind of warped cult status, for being all kind of eighties bad.

If Babs Broccoli has seen this, and the ink to the contract hasn’t yet dried, that sound you hear, laced with panic and fear, may well be that of Babs on the phone to Idris Elba begging him to take the part.

But if Heughan still manages to get the Bond gig after this, in what can only be described as a near career-death experience, he seriously needs to get his acting together.