Nun. Devil. Balloon. Frog. Trampoline. Hypnotist. Bulldozer. They may well seem like a bunch of random words to you  perhaps even the perfect list for a great night out even, but in the world of Scribblenauts, any one of them could get you out of trouble.

You see in the world of Scribblenauts, the written word is king.

Describing this title as simply a puzzle game, would be like describing Disneys latest release Up as merely a cartoon. It just doesnt do it justice.

You play as Maxwell, a boy on a mission to collect Starites. Yes, you may ask  theyre simply stars by another (weird) name. In order to do so, he has puzzles to solve and challenges to overcome: over 200 in all. 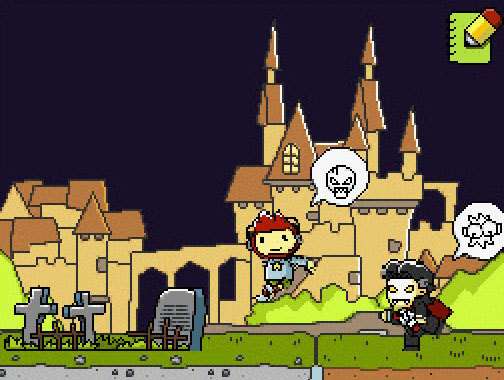 What?! It doesn't recognise it? Everyone knows that vampires hate 'ginger'...

Now normally, Maxwell would probably explore a level, jump up on a platform or two and bounce on the noggin of the odd enemy, pick up his starite and get the hell out of Dodge. Not here though. When you start a level, you are given a hint that may or may not help, and then you're given a brief look at the environment, and then... then youre on your own.

What you do then is imagine what Maxwell needs  literally. So, if you think he needs a bicycle to get him from A to B, you type in the word bicycle, then voila, a bicycle will appear. Maxwell can then sit on it and ride it around. But if you think roller skates will do the job, type them in and see them appear. You can then place them on Maxwell then watch him skate around.

Each level will give you a par number  just like in golf  for you to complete the task at hand. So for example for a par 3, you are expected to use 3 objects or less to complete it. The more times youre under par, the more ollers you get  the games currency. Get enough of these and you open up the next level etc.

Theres a nice variety to each level too. One sees you as a guest at a birthday party, and you have to hit the piñata open so everyone can have sweets. Using a laser gun sounds like a good idea, but if the party clown was to get in the way, it will end in tears. Trust us.

The beauty of the game is how creative you can get with it. Whatever item you conjure up wont necessarily help you, but its fun to see if it was one of the 10,000 words in the game's vocabulary. That's probably about 9,951 more than, say your average ASBOd teenager uses. And for the record, teenager is actually in the game, but ASBO sadly isnt.

Its a blissfully simple premise, one that well and truly comes alive in its execution. And lets face it, how many games in this day and age actually make you think? And you will, theres no doubt about that.

Those with a small vocabulary could get by using the same set of tools, vehicles etc., over and over, to get the job done. But that would really be missing the entire point of the game; theyd probably be better off with a more linear approach to gaming.

It doesnt mean you have to be a great speller necessarily; if the computer doesnt quite get what you mean, it will offer various alternatives that may or may not be what you were thinking of. And if it wasnt there, it may well offer up a useful alternative.

Its also a perfect title for the DS in the sense that you can invest as little or as much time as you like in it. Some puzzles will take seconds; others, quite a bit longer. And if you start to get too cocky, you can always try the level again, but this time, you cant use the same words you passed the level with on the other occasion. Sneaky.

And if you do happen to complete all levels, it even includes a level editor for you to make your own, so you can share with like-minded Scribblenauts.

At times, controlling Maxwell and whatever vehicle hes driving or object hes using can be a bit fiddly to control. But this is only a minor quibble considering how short each level is, and how easy it is to simply try again.

If you like your puzzle games, this is a must. And if you dont, well, its still a must.

Theres one word that springs to mind playing this game, and thats genius. Which, incidentally, is yet another word you can use in the game...