With a career spanning over thirty years, making his debut as he did with 1987’s Red Sorghum, Chinese director Zhang Yimou has never been overwhelmed by epic, as many of his films, including Raise the Red Lantern, Hero and House of Flying Daggers, perfectly illustrate.

His latest, a wuxia period drama, can also be added to that impressive list. 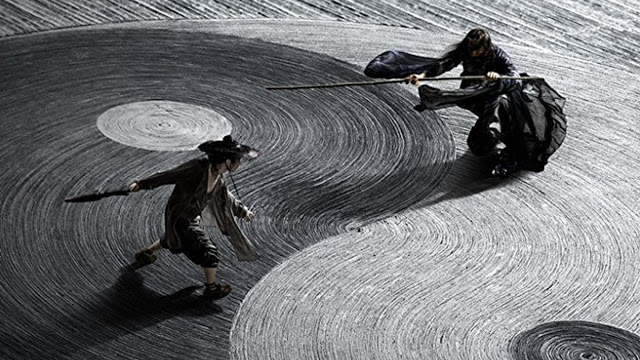 The problem with wars is, they’re not so great if you’re on the losing side. Many years ago, the Pei kingdom lost out on a city during a battle, which the king Pei Lang (Zheng Kai) has held a grudge over for some time. Commander Zi Yu (Chao Deng) was mainly to blame, when he was defeated in a duel, going up as he did against the tasty Yang Cang (Jun Hu).

Zi Yu suffered physically from the defeat as well as from humiliation, getting severely wounded in the process. So much so that he installed a lookalike by the name of Jing Zhou (Chao Deng), replete with wound, at court, whilst he attempted to heal in a cave dwelling close by.

This was particularly awkward for the only other person in court to know this secret, his wife Xiao Li (Li Sun), who had to go along with the plan and treat this stranger as her hubby.

Zi Yu gets into a character a little too much however, when he challenges Yang Cang to a rematch. When the king finds out about it he’s livid, so much so that he strips him of his command and makes him a commoner.

Undeterred, despite not having the same training as his doppelganger, Zi Yu persists with training for the fight, against the odds, with the city’s fate once again hanging in the balance. 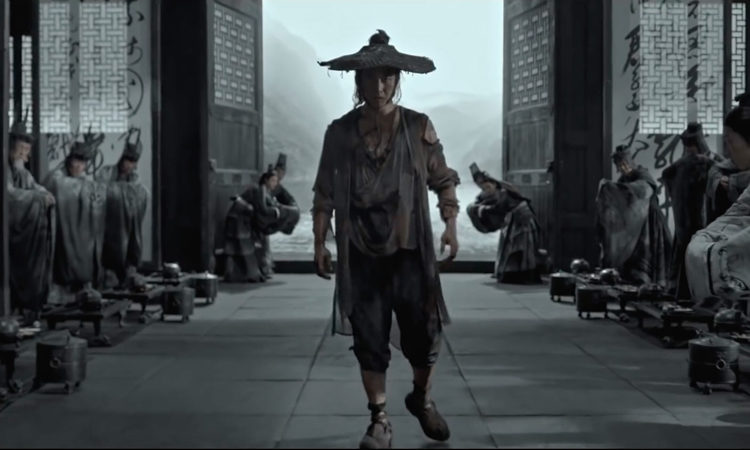 Peasant chic was the talk of the town at London Fashion week.

The first thing that hits you squarely between the eyes is this film’s overwhelming stark beauty. To the untrained eye it takes the appearance of a black and white film, with hints of muted colours here and there. It may well have been helped by some stunning art direction and costuming however, that deliver the film’s theme of light and dark perfectly, no doubt all designed to be black and white to begin with, to strenghten the visual contrast. The result is a sumptuous landscape of light and dark throughout.

The film is essentially split into two halves; the first setting up the story, then developing it with positively Shakespearian clout, as it explores themes such as love, loss, revenge and deceit. The second builds on that, and includes vibrant fight scenes with their heady mix of martial arts and ballet, that merge together into a cinematic poetry.

The result is epic on all counts. Visually it’s outrageously stunning, balancing the fragility of elegantly painted, paper thin dividing walls, with the sheer scale of the palace they reside in.

And if that wasn’t enough, it also includes the coolest brollies since the invention of the telescopic umbrella, which no discerning warrior should be seen without, quite frankly.

At the age of 69, Zhang Yimou proves that he hasn’t lost his appetite for telling stories on the grandest of scales, with such flair, elegance and style, as they don’t come much grander than this.