Shadow of the Tomb Raider

It’s not fully appreciated how difficult it is to pull off wearing khaki. It’s not just a colour, it’s a way of life. Someone who always manages to embrace it is Lara Croft; if ever khaki had a poster girl, it’s Lara.

After all that mucking about in the snow in did in Rise of the Tomb Raider played havoc with her wardrobe. No one should be seen dead in snow camouflaged puffa jackets with fur-trimmed hoods. If it wasn’t a direct cause of the game being under par, it certainly contributed.

For her latest adventure, Lara returns to more familiar, warmer climes, which can mean only one thing: khaki’s back baby!

It’s not all good news though; Lara finds herself in a tomb – where else?! – and removes a sacred knife from its plinth. What she doesn’t realise though, is that she’s inadvertently set off the apocalypse, and the countdown to the end of the world has begun. But on the upside, she looked fabulous doing it, so every cloud. 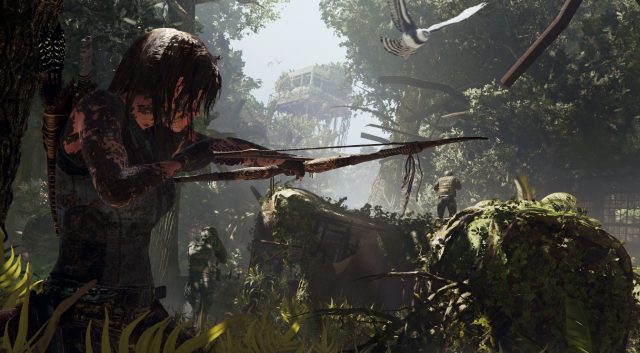 I told you I'd get my own back for you pushing in at the coffee counter.

Thankfully, this latest outing for Lara rights the various wrongs of that 2015 release, and returns to all the good work of the 2013 re-boot. In that respect, it’s classic Croft, at her tomb-raiding best.

Here, Lara finds herself in the deep forests of South America, exploring Mayan and Aztec folklore, in a bid to re-set her mistake, and also to prevent her nemesis Trinity from taking advantage of her world-ending hiccup.

One of the most interesting new inclusions is the ability to not only change the difficulty, but two other elements too: exploration and puzzle. This means you could tailor the overall gaming experience to your own abilities. How many will tinker with them is unclear – we didn’t – but it’s an interesting touch, nonetheless.

A welcome improvement is certainly that of being more puzzle-orientated than combat. For us, Lara has always been closer to the Indiana Jones spectrum, rather than Uncharted, and should really have a compass in her hand instead of a gun. This means that you will find yourself exploring more, and being shot at less, which has to be win/win. 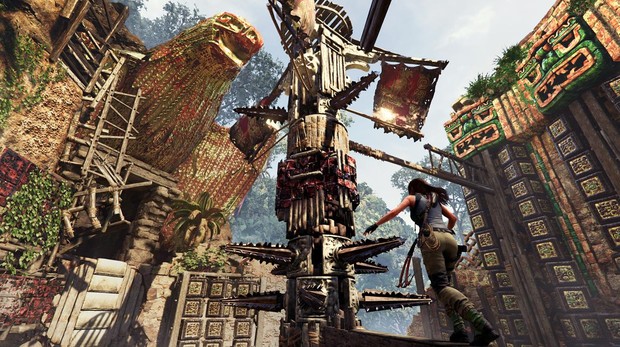 Wow, The Crystal Maze has really ramped up its puzzles.

The downside of this is that the weapons wheel is somewhat lacking. You pretty much have a rifle and sidearm, which you can upgrade, but you really show just stick to the bows and knives, as these are the only weapons you should be using. It does mean that when you are opening up skills on your tree, you should focus less on the bang-bang weaponry, and more on other areas of usefulness.

What you will discover, apart from the challenging tombs, is that the right stick is your new best friend. Click it, and it will highlight, for a time, all points of interest and collectibles close by. This means you will be clicking it a lot. But at least it will be good training to improve your thumb wrestling prowess.

Another nice touch is that although the story is linear, with the camp sites you can use fast travel to pop back to earlier areas. This is encouraged as there are areas that you can access, only once you’ve opened up the area ahead. And even with the focus of the main story, if you want to take time out and explore an area in more depth, you can. Sure the end of the world is nigh, but it can wait why you check out a ruin and see if there’s anything worth discovering.

And yes, to a certain extent, Lara is going back to her roots. There is more emphasis on exploring, and some of the tombs, particularly depending on the difficulty setting you have on, are pleasingly fiendish. For instance, the tomb with the mirrors and lights currently still has us stumped.

Developers Eidos should also be commended for bucking the trend, and not crow-barring any multi-player nonsense into proceedings. This is wholly a single player experience, which in this day and age, should be embraced. And you will have to go some way if you’re a completist, as there are lots of things to pick up along the way, including a few new outfits that for some bizarre reason, don’t embrace the khaki.

With Lara getting more down and dirty in tombs, doing what she does best, the franchise appears to be not only back to its best, but also back on track to firmly put Lara, clad in khaki, back on the world map as explorer numero uno. If she manages to save the world in time, that is.