On the surface, the internet looks an incredible resource at our fingertips. Want to buy a Breville toaster for delivery the next day? You can. Always wondered what the capital of Zambia is, you can Google it (it’s Lusaka). Or you simply want to troll someone on social media and make their life a misery, you’re just a click or two away.

But all of this is, believe it or not, the presentable face of the internet, with the existence of the dark web lurking in its underbelly. It’s here that the rogue and criminal element thrive, in the cover of anonymity, where almost anything goes.

Director Tiller Russell’s film focuses on the arrival of the Silk Road, a website where virtually anything illegal could be bought with little in the way of consequences.

Hmmm I'm thinking donuts all round...

Ever since he was young Ross Ulbricht (Nick Robinson) has wanted to do one thing: change the world. It’s a big ask, but he’s reached the stage where he believes he can do it, rightly or wrongly.

He comes up with the idea of a website, which he calls Silk Road, which allows you to buy things that you wouldn’t necessarily be allowed to on the net. Think eBay for the criminally inclined. Ross believes that everyone should have the right to buy whatever they want, including various illegal drugs. And as he soon finds out, he’s not alone in this philosophy as his website soon attracts huge visitors.

With the vast growth of the site, it’s not long before its shady activities catch the attention of law enforcement. Rick Bowen (Jason Clarke) has had his troubles on the force, and now finds himself brushed off to Cyber Crimes. It’s there that he’s introduced to Silk Road, and despite his flagging it to superiors, they don’t appear that interested. So Bowen decides to take it on himself to find out just who is at the end of the Silk Road. 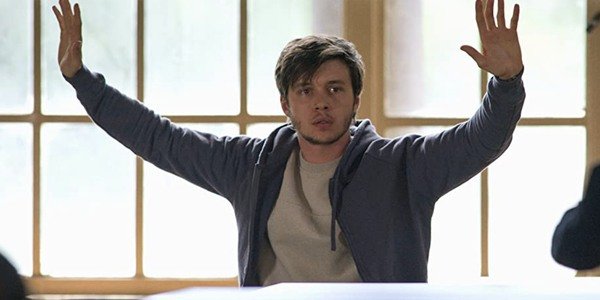 Not everyone was into the latest Joe Wicks good cop bad cop fitness video.

With so little known about the dark web, by upstanding law-abiding citizens at least, it’s prime material to be exposed on screen. And Russell’s film certainly gives a rounded overview of how it all works with his telling of this true-ish tale.

Where it comes unstuck is in the relationship that it attempts to develop between its two protagonists Bowen and Ulbricht. It’s probably because they didn’t have much of a connection in real life, so the script attempts to build other relationships, such as the one Ulbricht has with his girlfriend, played by Alexandra Shipp. Unfortunately for her, it doesn’t amount to much and is superfluous throughout. She’s not helped out by the fact that Robinson’s performance is somewhat stilted, having as much life in it as an excel presentation.

In an attempt to inject some warmth and personality, Bowen’s home life is included, which includes his young daughter who may have learning difficulties. Its inclusion sadly gets a little syrupy and sentimental, and struggles to fit in with the overall story.

With these unnecessary tangents, the script sadly misses the rich vein of story regarding the dark web. Despite its early promise, you’re likely to know just as much about the subversive goings on within the dark web at the end of this film as you did before it.