Despite being one of the most quirky and creative directors on the Hollywood block, David O. Russell doesn't get nearly as much recognition that he deserves. At least the talent he works with do. Over the years he's worked with the likes of Ben Stiller (1996's Flirting with Disaster), George Clooney (1999'sThree Kings), Dustin Hoffman (2004's I Heart Huckabees) and Christian Bale (2010's The Fighter).

On top of that list there's also Russell regular Mark Walhberg who's appeared in three of his previous films.

His knack for attracting great performers shows no signs of letting up with his latest film, which stars current Hollywood hotties Bradley Cooper and Jennifer Lawrence, as well as screen legend Bob De Niro.

After eight months in a mental institution, Pat (Cooper) is ready to see his wife again. The problem is, she isn't. To illustrate this fact, she already has a restraining order placed on him.

He's not really that to blame, considering he came home early one day, only to find her in the shower with another man. Still, his reaction to the situation saw him end up in the said institution, and diagnosed as being bi-polar.

He's keen to prove to his wife that he's a changed man, with a far more positive outlook on life. His positivity is severely tested however, with not only having lost his wife, but his house and job too.

With few options open to him, Pat returns to the family home of mom (Jacki Weaver) and dad (De Niro). But that comes with its own stresses, particularly his father's OCD behaviour. But nothing will get in the way with his re-uniting with his wife.

While at a friend's house, he meets Tiffany (Lawrence). Although there's no denying the immediate chemistry between them, Pat is swiftly made aware of Tiffany's own weakened mental state. She's still grieving over the death of her husband, and she's clearly not handling it well.

Although the pair are clearly unstable, a curious friendship is born. This is cemented further by Tiffany's declaration that she hangs out with Pat's wife, and she could actually help in his plan to get them get back together. This offer however comes at quite a heavy price, as she wants something in return... 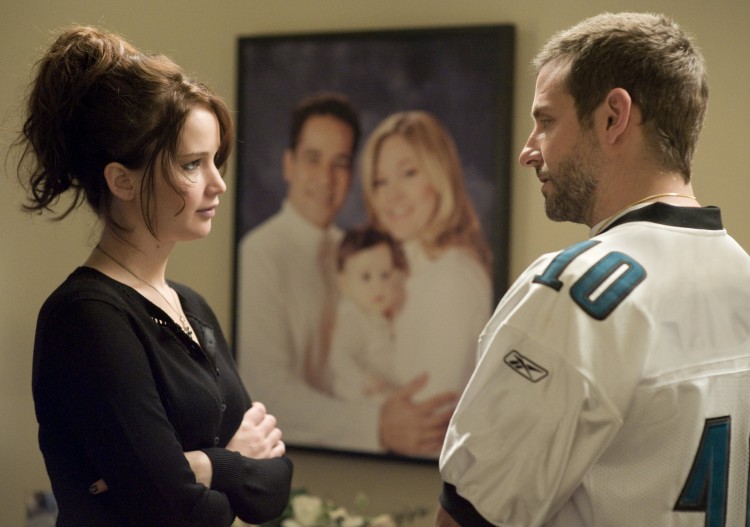 And you still haven't explained to me why we have a picture of a family we don't know hanging on our wall!

Although this could be described as a rom-com, with director Russell at the helm, it's never going to be that straight cut. That said, it's probably his best attempt at a mass market feel good flick.

All the ingredients are there: it has two of the hottest Hollywood actors on the planet in Cooper and Lawrence; it also has one of the greatest actors of all time in De Niro with one of his now fairly regular light, comedic roles; and it is essentially a boy-meets-girl film.

What gives the film its added quirk however, is the underlining issues of mental illness. This gives Russell the freedom to allow his central characters to behave slightly off kilter. It will be interesting to see how mental illness charities react to the film, as there's possibly an argument for the film taking the illnesses lightly; for both the main characters, their illnesses almost give them free license to behave charmingly oddball, and although Russell does touch on the darker sides of their personalities, it's fair to say it isn't a balanced portrayal.

That said, both Cooper and Lawrence really throw themselves into their roles, fully fleshing out the vulnerability of their respective characters; the pair are most definitely damaged goods, and it's a pure joy to watch them develop on screen together.

Even De Niro gives a good account of himself; occasionally, under the wrong director, De Niro's attempts at comedy can go a little awry, but Russell allows him to give his character a little pathos  as well as an OCD  for him to sink his teeth into.

In fact the film as a whole allows all those concerned to give a really good account of themselves.

Silver Linings Playbook is a wonderfully observed film, that is both funny and tender, which manages to break many of the now stale rules regarding what constitutes a rom-com and gives the genre a new lease of life.

For Russell, it's probably the closest thing he's done to an all out commercial Hollywood film, but without him losing touch of his indie sensibilities. He also once again proves that it's no surprise why all the top talent want to work with him, when he gets so much right so much of the time and it's got nothing to do with luck.