Ethan Hawke is not your typical mainstream actor. That's not to say he doesn't want to be; there are clearly a number of titles on his CV (including Daybreakers and the Assault on Precinct 13 remake) that suggest that that's exactly what he wants to be.

But he's not quite a huge box office draw. That may be his loss, but it's an audience's gain, as it means he can get involved in more independent projects, perhaps giving him more scope as an actor.

Sinister marks his debut as a leading man in a horror film no less. And no, Daybreakers doesn't count as horror, as it was more sci-fi than anything else, that just so happened to feature vampires. Yawn.

Ten years ago writer Ellison (Hawke) had a big hit with his first true-crime book. Since then however, his subsequent books haven't been anywhere near as successful.

He decides to move his family to a new house for a fresh start. He's hoping their new location will be just what he needs to get his creative juices flowing again. Although his wife Tracy (Juliet Rylance) is aware that the new locale they've just moved to is the area that some haunting murders took place, she's unaware of their proximity to where they occurred: the very house they've just moved into.

Just as Ellison and his family move in, Ellison discovers a box of old cine film and a projector in the loft space. When he plays back the films alone in his office, he realises that they include footage of the actual murders that took place on that very property. Not only that, there are other films of other heinous murders that have taken place.

As he watches them over and over, it becomes apparent that there are links to all the murders. The most prominent one being however, who was behind the camera?

The more he digs into the crimes, the all too aware he becomes that he could be putting the safety of his family in life-threatening danger. 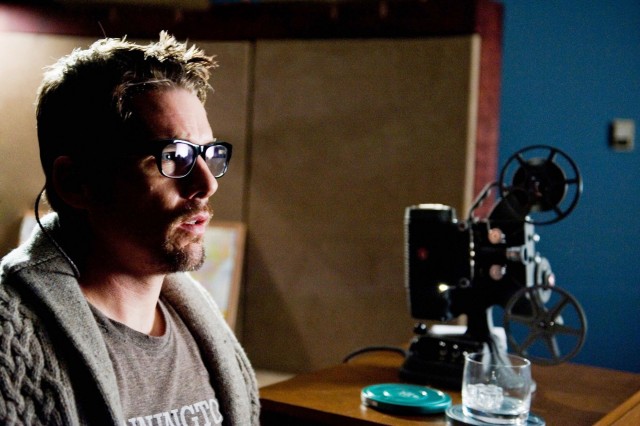 What this film proves is that Hawke's is certainly versatile enough to carry off the main role in a mainstream film. He puts in a fine performance as a character having to come face to face to with evil. Unfortunately, the evil in the film just isn't that frightening.

Director Scott Derrikson, whose only other films are The Exorcism of Emily Rose and the dire remake of The Day the Earth Stood Still, decided to go with a truly dark palette cinematically. This results in so many scenes where barely anything is visible. Even when the family move into the new home, they don't bother re-decorating, choosing instead to leave all of the walls forebodingly dark in colour.

This hardly helps the many times that Hawke's finds his character wandering down hallways in the middle of the night, without even turning on a solitary light. Yes dark can often help create a scary ambience, but if it's nothing but dark, all it ends up creating is eye strain.

To compensate somewhat for the visual mist, Derrikson relies on sound effects for his thrills. Unfortunately he relies on them far too heavily, with noises used to prompt fear over and over; sure it may work the first couple of times, but without a real pay-off, they soon become predictable and tiresome.

The director, who also wrote the screenplay, also attempts, somewhat half-heartedly, to create a new horror character known as Mr Boogie; ironically though, he has very lame moves. In fact, he uses him more as a red herring rather than a bone fide figure of fear. This would have been an interesting twist if the film's conclusion was a far scarier proposition, but it isn't.

After working quite hard in building up an unsettling atmosphere, Derrikson appears to have run out of ideas by the film's lacklustre conclusion.

If you're after a truly 'dark' film, then Sinister fits the bill, just don't expect it to be at all scary.