There’s nothing quite as special as the bond between sisters. It’s a unique connection that means they look out for each other no matter what. There’s nothing that can break this tie, except one thing: relationships.

This Japanese vertical shooter explores just that, when a bevy of sisters find their relationships with each other disrupted when they all find themselves in love – with the same man.

Instead of bitching about it to others behind their siblings back, they confront each other face on, with guns, naturally. It’s difficult to ascertain if Yashikin – the object of all of their affections – is a lucky guy or not; after all, these young women are packing some serious heat. 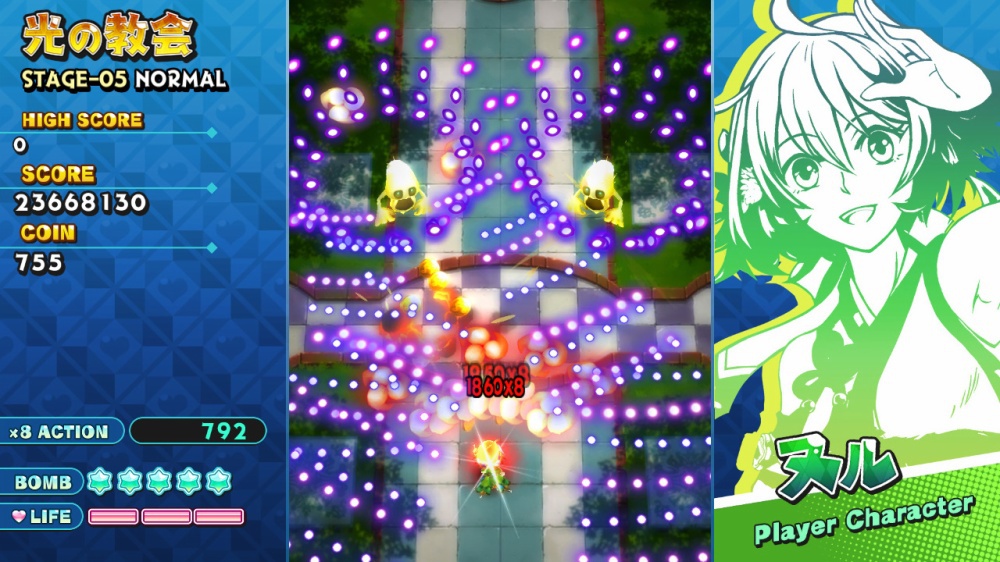 Some felt that this year's Christmas lights where a little too showy.

You begin by choosing which of one of these love forlorn sisters you want to be, with each one having a different variation on shooting; one shoots directly up in straight lines, whilst another shoots in a spray pattern etc. You then make your way up and around the screen shooting whatever comes your way. To clear a level, you have to defeat one of your ‘beloved’ sisters in a boss battle.

It’s a simple enough premise, and the game adheres to the conventions and traditions of the vertical shooting genre. It doesn’t make it easy though.

At times, on whatever setting you choose, you will suffer from bullet blindness, as the screen explodes with patterns of ammunition going off in every direction. To say that it gets somewhat busy is an understatement. It’s made all the more intense by the fact that the action takes place in the middle third of your TV screen. This narrows the field of play significantly, making it often feel quite claustrophobic. You are given the option to change the orientation of the screen, which is useful for the Switch version when taking it out and about, but the size of the screen in any orientation won’t do you any favours, with so much going on at any given time. 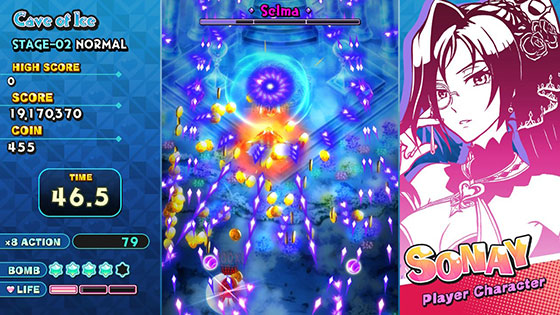 You are here. No wait, here. That's not right, maybe a little over to the right now?!

Thankfully the levels don’t last too long, giving you the opportunity for some long, deep breathes, and to walk around a little to clear the wall of colours from your mind’s eye. Certainly a lie down may well help.

With the levels being relatively short, it also adds to the game’s ability to dip in and out as you like. As it’s such a chaotic experience, it’s not the kind of title you’re likely to have a long gaming session with.

As is the way with some Japanese titles, you also have to prepared for a certain amount of cleavage, as the sisters, in story mode at least, are more than happy to have theirs on show. Thankfully, if you are neither interested in the love story or their bosoms, you can turn Story mode off, and just focus on all the shooting.

Also, if you’re not finding the game challenging enough, you can go into Maniac mode, where you can tinker around to make it as hard as you like, such as changing the size and speed of the bullets. But if you do resort to doing such a thing, you may well have a screw lose yourself that needs tinkering with.

With charming old school mechanics, and with the kind of on screen action that could very easily set off seizures, this game about loved up sisters is, ironically, not for the faint of heart.