Stand-up comedian Eddie Izzard is a bit of a dabbler. The comic, who has been outspoken regarding gender fluidity, and who currently prefers the pronoun ‘she’, is a keen activist with a sharp eye on the world of politics, having run twice to be a member of Labour’s National Executive Committee.

And from time to time, she dabbles with acting too. Here though, she invests more of her time by not only co-writing the script, but also taking the lead in this unusual spy thriller.

Well, I'm not eaxactly an Uber driver, you just looked like you needed a lift.

1939, and Britain is on the brink of a war with Germany. Despite tensions being considerably high, a peculiar school for girls on the south coast attempts to stay calm and carry on. It’s not the fact that there are only 20 girls attending that makes it peculiar, it’s that they are all German. Not only that, but they also happen to be the daughters and grand-daughters of the Nazi High Command.

When their English teacher disappears, Thomas Miller (Izzard) is given the opportunity to take over by the school’s governess Miss Rocholl (Judi Dench).

It’s not long however before Miller gets a sense that not everything is at it seems at the school, which is just as well, as it turns out he’s no English teacher either. 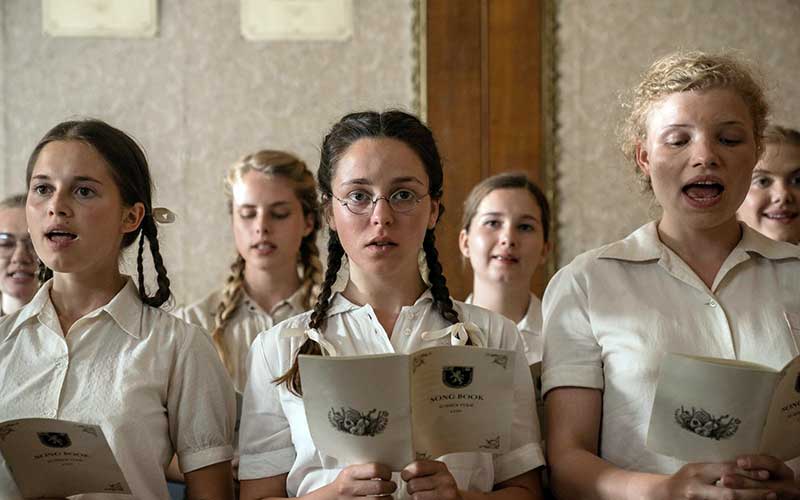 I really don't think the lunchtime menu is worth singing about quite frankly.

There is something deliciously retro about British director Andy Goddard’s film. It is clearly a throwback to thrillers of old, playing homage to classic spy thrillers such as 1049’s The Third Man; imagine if you can, Bexhill-on-Sea as the Vienna of the south coast, with Izzard being chased left, right and centre. It’s just as well she’s done so many marathons as she has a lot of running to do here.

But although her running is top notch, there appears to be a little ring rust as far as her acting is concerned. It’s on the wooden side for sure, making for some awkward scenes where dialogue doesn’t feel particularly natural. But instead of being an eyesore, it manages to fit in with the overall vintage feel of the piece.

It’s also focusing on an interesting part of history, as the school actually did exist, on what is now known as the Vienna of the south coast.

Dench has little to do, she’s a national treasure after all therefore she shouldn’t be overworked, but what she does deliver is a nuanced performance of a woman thought to be doing the right thing by her gals. Fellow national treasure Jim Broadbent also pops up, who clearly had fun in his fairly brief role.

Six minutes to Midnight may feel dated to most, but Goddard’s attempt at a homage to classic cinema, overall, works well. With its pacy energy, pleasingly retro locale, and intriguing plot, it makes for an entertaining look back at past events, both real and cinematic.