In the electronics world, copying ideas appears to be the norm. Take phones for example; if one comes out with a 2 billion mega-pixel camera, all the rest will follow. Fingerprint ID? Yep, we’ll nab that. Have your face as a talking poo? Who wouldn’t want that! And so it goes on.

In the world of film however, film-makers are usually a little more subtle. Somehow though, director Rawson Marshall Thurber didn’t get that particular memo with his blatent rip-off of the 1988 classic Die Hard, in his film which really should have been called Die Hard in Hong Kong. 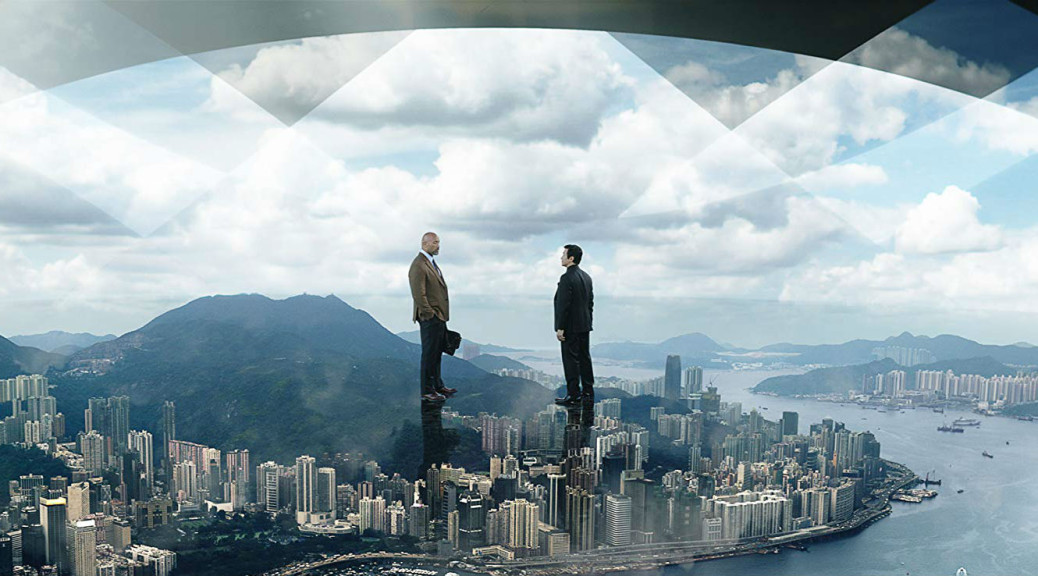 Yeah, they'll put a background of us walking in the park or something.

During a hostage situation that went bad, US Marine Will Sawyer (Dwayne Johnson) lost his leg from just below the knee. Ten years on and Sawyer finds himself in a better place. He’s married to Sarah (Neve Campbell), who just so happened to be the miltary surgeon who operated on his leg, and have two young children.

The whole family find themselves moving into the world’s tallest building, situated in Hong Kong, where Sawyer works for the very wealthy man who built it, as a security advisor.

He doesn’t do himself any favours however, when a group of well-armed criminals penetrate the building’s security, and take control. One of their first objectives is to turn the heat up – literally – by setting fire to one of the floors.

To make matters worse, Sawyer’s family’s plans changed, which means that they ended up back at their apartment in the building, trapped.

Now Sawyer finds himself with the unenviable task of finding his way into a burning building, full of baddies, to save his family.

Truly, I can't apologise enough for getting you involved in this.

There’s no denying the charm of Dwayne Johnson. He certainly has a presence that goes some way to explain his number one position as the highest grossing star of 2018. But as anyone who has seen him in the entertaining TV show Ballers, he can do so much better than this.

Director Thurber, who hasn’t tackled an action flick before, struggles to display any sense of originality throughout. The characters are two dimensional, the script even less so, leaving nothing left other than cliché after yippee-ki-yay cliché.

Perhaps the only memo he did get, was that he was to make a disaster flick, and clearly got the wrong end of the stick.

Johnson does his best, or at least his biceps do, and it’s great to see Campbell back on the big screen, even if her role is far from demanding.

If you’ve never seen Die hard then, well, simply see that instead.

As far as this is concerned, it’s less scraping of the sky, and more of the bottom of a barrel.