There so much expectations around game titles these days. Which is not surprising when you consider what a huge, multi-billion behemoth the games industry has become.

One of the problems with developers focusing the attention of gamers on these reliable AAA titles, is that it can make it difficult for brand new titles to stand out and get noticed. Thankfully for Sleeping Dogs, it's managed to strut its arse-kicking stuff and make everyone sit up and pay attention.

It may be a new title, but it's obviously not a new game. It's easy to describe it as a GTA clone, but it's much more than that. Its modern-day, oriental setting is more reminiscent of the adventures of a certain Ryo in Japan, but with less sailors and fork-lifts. So much so that Sleeping Dogs feels the spiritual successor to Sega's classic Shenmue series.

In fairness, it may not be quite as new a title as you'd think. It actually started life as the third instalment in the True Crime franchise, going by the name of True Crime: Hong Kong. Due to spiralling costs and delays, however, Activision decided to cancel it. Square Enix, knowing a good thing when they saw it, decided to pick up the title, but not the rights to the True Crime name. And so this bad boy puppy was born.

You play Wei Shen, a young Chinese-American cop, who returns to his homeland of Hong Kong so that he can go deep undercover and infiltrate one of the notorious Triad gangs. Although he eventually gets accepted, it's quite an ordeal to have to take part in gang activities, whilst knowing that you're still a cop. And it's this dichotomy that really gives the game an edge. 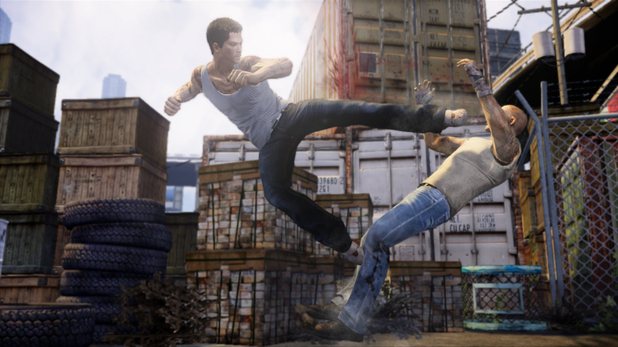 And that's what you get for making fun of my vest.

One of the most refreshing elements of the game is that the combat isn't immediately gun-based. Many of the early levels see Wei taking on baddies in hand-to-hand combat. Despite always being heavily outnumbered, the fighting mechanics are surprisingly easy to get to grips with; you could even get away with just button mashing, but the system is a little more sophisticated than that. Along the way you can upgrade to include even more moves. Or you could cheat, as we occasionally did, and just repeatedly run over our foes. The end result was exactly the same though: fun.

Although we understand and appreciate why people love the GTA games, they've always left us cold. We prefer Rockstar's more recent titles, LA Noire and Red Dead Redemption, with their more comprehensive storylines. Although Sleeping Dogs owes its fair share to the open world game-play of GTA, it just feels like it has a little more meat on its bones.

It's also just a fascinating place to just hang out. You can buy food from a street vendor, buy some nice threads from various shops, go to a karaoke bar for some great mini-gaming fun, or take a boat out around the island. And if you feel stressed out from doing all that, you can even have a 'massage'. And whenever you feel like it there's the absorbing story mode which you can drop in and out of at your leisure.

The main campaign can have you turning up at known gang areas, beat the sweet n sour out of them, and then hack the CCTV camera in that area so you can keep an eye on their activity from the privacy of your own apartment. There are also cars to be stolen and errands to run, as you make your way up the Triad ladder.

None of it is original, but it's done with such flair and style, you don't really care. If you're used to any of the myriad of open world games, this is a title that you can easily just pick up and play.

It may not be ground-breaking stuff, but what it does do, it does extremely well. Just driving around town, with the neon lights glowing in the rainy night air, is a simple pleasure to behold.

One slight nag with the game is the save system. The map will have you travelling fair distances, with some gang areas only accessible by boat. The problem is, if you fail to complete the challenge, you'll end up miles away from where you were, and you'll have to schlep all across town once again to have another crack.

Other than that, Sleeping Dogs offers an engrossing story, in a vibrant and exciting locale.

The problem however, is that now that it has become a big hit, we're guaranteed a whole pack of Sleeping Dogs for years to come. Well they do say that Chinese repeats, so that should only be expected.

That shouldn't take away from this game's deserved success. It just proves that a good game doesn't always needed to be innovative; sometimes solid game play and a strong execution is enough to make a gamer happy.