As we all know, science can be used for evil as well as good. Sadly it can also be used for the most redundant research, as this study regarding the perfect smile reveals.

According to this ground-breaking study, the optimal smile goes up at the corners by 13 to 17 degrees, making it not too wide, reaching only 52 per cent of the distance between someone’s eyes.

Ok, so we might not yet have a cure for cancer, but at least we can put the perfect smile on our faces, thank you scientists!

But there can also be something quite ominous about certain smiles, as this new horror proves. 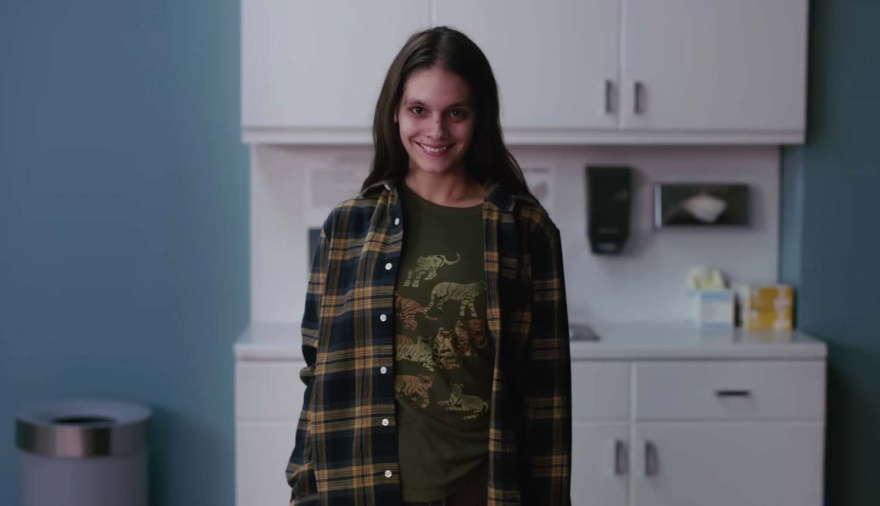 Welcome to Ikea, this way to hell on Earth...

Working in an Emergency Psychiatric Unit is therapist Dr. Rose Cotter (Sosie Bacon). She sees a lot of patients with mental issues, but when a graduate student walks into her office, showing signs of mental anguish the likes of which she’s never seen before, she certainly gets her attention.

The consult doesn’t quite go to plan however, resulting in tragic circumstances that certainly make a lasting impression on Rose.

But as she soon discovers, it leaves her with far more than that, with what she believes to be some kind of curse that the student suffered from, one that has already targeted its next victim – Rose herself.

Smile is a remarkable success story, not so much for on the creative front, but certainly in terms of marketing. The images of demented smiles that accompanied its release proved to be a major factor on the film’s release, helping the film go on to make over $200 million at the box office, made all the more remarkable by the fact that it only had a budget of $17 million. Now that’s bound to put some very perfect smiles on some studio exec’s faces.

Not bad for a directorial debut by Parker Finn, who also wrote the script.

On the surface at least, it’s refreshing for a new horror film not to rely either on an existing franchise, or even create a new evil protagonist. In fact the main protagonist of this is fear itself; there is no identity hidden behind a mask or white sheet, it’s an unknown entity that Rose senses has her in its sights.

Although it doesn’t have a physical evil presence, the film isn’t as original as initially believed. As the story unfolds it becomes more apparent that it echoes a few other films in its story mechanic, most notably The Ring franchise, and It Follows. In short, it’s sort of a horror version of pass the parcel, with you really not wanting to be the one ending up with the parcel on your lap.

Also the main character, played by Bacon – yes of the Kevin Bacon – is disappointingly lacklustre. The fact that she plays a professional therapist should be a bonus, someone who has studied human behaviour and therefore has a handle on it; unfortunately she falls to pieces within moments of her becoming aware of what’s confronting her, reducing her to the role of your average Joe, which does her professional stance a disservice. Surely seeing how a professional would deal with this extraordinary scenario would be more intriguing than just watching Josephine Bloggs shit her pants.

That said, Finn does well in building tension and atmosphere, although his jump scares don’t so much jump as stumble into the air with little in the way of fright.

It’s impressive that Finn’s film has made such an impact, proving that there really is an appetite for ‘original’ horror, but unfortunately his

Its incredible success however almost guarantees that Finn will be wearing a massive shit grin on his face as he gets to work on an inevitable sequel, so he will get the last laugh.


***We've a copy of Smile on Blu-ray to be won in our latest competition. For your chance to win, enter here.***