War, what is it good for? A valid question that was asked by Edwin Starr with his track ‘War’, way back in 1970. There always appear to be a war somewhere, ones you may not be aware of and some that you probably are, like the atrocities that Russia are currently committing against the brave people of Ukraine.

But life, for those more fortunate, goes on. The games market, as we all know, is a huge one, and one of the most popular genres are the ones set during war time, like your COD’s and Battlefields.

That said, the war in Ukraine has caused Nintendo to hold back on releasing Advance Wars 1+2: Re-Boot Camp; although it’s far from being a simulation, it does feature an enemy that may resemble that of Russian forces, so the game has been placed on the back burner.

But there’s good news for campers at least, with the release of the fifth instalment of the Sniper Elite franchise. 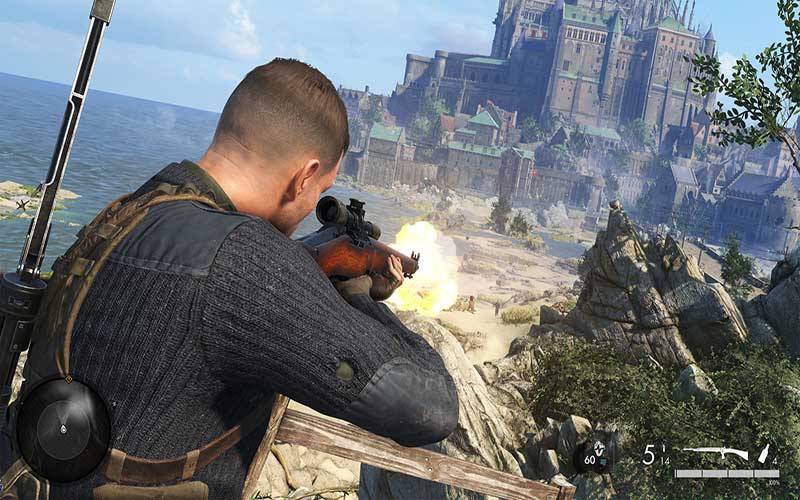 Now this should put an end to them putting junk mail through my letterbox.

The developers Rebellion Developments probably thought that despite the current political climate, releasing a game based on WWII was on safe ground. After all, there’s never a bad time to shoot Nazis.

Seemingly out to win the war single-handedly, with his sniper rifle at the ready, is Karl Fairburne, an army ranger sent to France during its invasion by the Germans in 1944. Mission after mission he aims to get as many Nazis in his cross-hairs, taking them out, one by one.

It’s clear to see playing that this third-person shooter has come a long way since making its mark on its first outing in 2005. Back then its focus was most definitely on all things sniper-related. Most of the missions were based on the player finding a safe spot to watch their mark, then take them out.

Now, 17 years on, this latest instalment is a heady mix of the Call of Duty style of play, mixed with a little Hitman.

Using your chosen sniper rifle is often called into play, with a heavy dose of stealth involved. But then there are times, where if you alert the enemy, you resort to the tried and tested method of gunning and running. Automatic machine guns and the like are available to use, and you will have to on many an occasion, as enemies come thick and fast. So at times, it can feel like a level of a Call of Duty game set during the same period in history. There’s nothing wrong with that per se, but it feels a little like turning its back on its roots for the sake of the appetite for less thinking and more shooting by modern gamers. 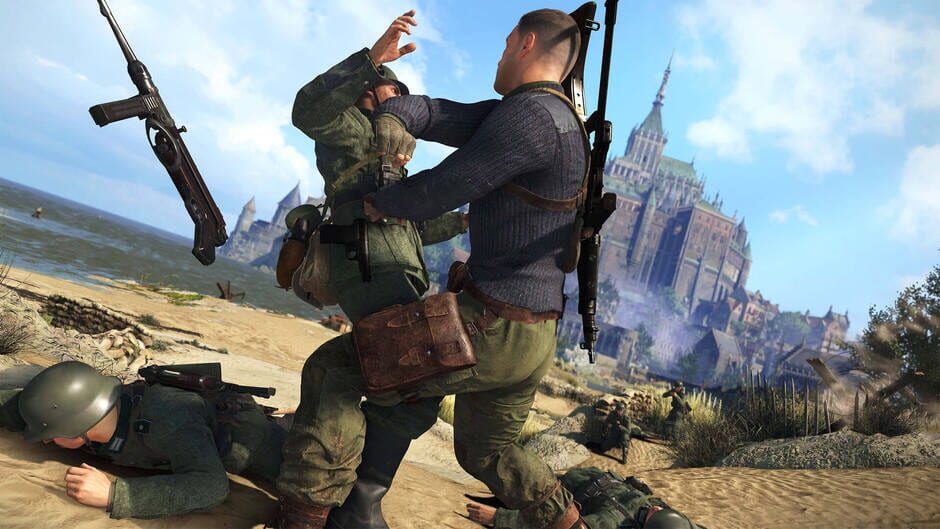 Now what was that you were saying about my mother?!

It does shine however, when you get to use the sniper mechanic; looking down your scope, getting the magnification just right, enemy in your sight, then letting off a lethal shot. If done correctly, you’re rewarded with the game’s classic image of your bullet entering your enemy and making itself right at home, all in glorious slo-mo.

There is an interesting issue with using the sniper rifle however; the main purpose for using it is for stealthy kills, with no one else knowing, but we often found that as soon as you pulled the trigger, your enemies heard it and were on high alert, which feels at odds using it. There are special bullets, modding elements to your weapon etc that improve the stealth abilities using it, but even trying to take all this into account, they still ended up being noisy most of the time.

As far as the missions are concerned, they’re pleasingly varied, set within some seriously large maps. All your objectives aren’t necessarily available to you from the off, instead revealing themselves when you enter a particular area and picked up some valuable Intel. Each one can therefore take up a fair amount of time, so it’s useful that you can save your progress at any time.

Although it isn’t exactly a looker on next-gen consoles, particularly with the character face rendering, the environs themselves stand up well in terms of rural France as a whole. And entering some of the quaint villages are also quite evocative, where you may feel like pulling up a chair at a local bar, ordering yourself a cheeky glass of vino and take in the scenery; if only for those pesky Nazis.

The single campaign is quite hefty, especially if you want to complete all the missions to attain a three gold star rating. But there are a few extras on offer here. For example, there’s Axis mode, where an online opponent can appear in your mission, with the sole purpose of hunting you down and taking you out, and not for a show and meal.

You can also play co-op, and there is a multiplayer mode too, but with so many campers in a map, with many just waiting to see someone appear in their sights, it does start to feel like playing the waiting game after a while.

There is a case that the franchise has evolved too much, moving too far away from its pure sniping roots, and it has to be said, there is some truth to that. But there is just enough sniper action to make it stand out from the rest.

Although far from original, Sniper Elite 5 is great fun, hugely entertaining and highly addictive. And let’s face it, who can resist shooting an enemy through the eye and watching their internal organs explode. But hey, that’s war for you, soldier.