Shoes can be hard to fill. Space shoes harder still (and not just because it’s even trickier to get a wider fit in all of space), particularly when they contain big-footed Harrison Ford playing the iconic space pirate Han Solo.

With Disney now playing bitch to Lucasfilm, it was only a matter of time before Solo’s antics were revisited. But with Ford too old for the part, and far too grouchy, a younger version needed to step up and indeed fill these very big shoes. Enter space left, Alden Ehrenreich. Never mind the feet, does he have the kahunas to play legendary Solo? 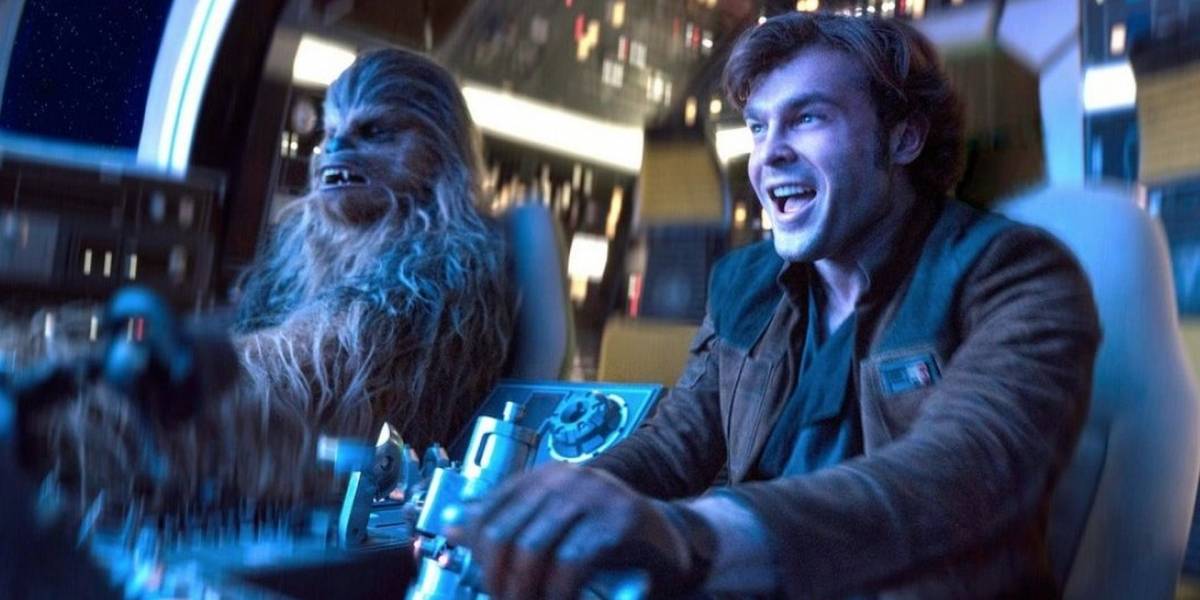 This is so much more fun than pushing a shopping trolley around a mall!

The planet Corellia is under the tyrannical reign of Lady Proxima; she uses child labour to do her bidding, in return for shabby shelter. One whipper snapper, going by the name Han (Ehrenreich) has had enough, and has an audacious plan to get himself and his girlfriend Qi’ra (Emilia Clarke) off of the planet for good.

His plan however, was perhaps too audacious, and although he makes it, Qi’ra doesn’t. He vows there and then to make his fortune so he can return and save her.

After a stint at Imperial school, training to be a pilot, his path crosses that of Beckett (Woody Harrelson) and his crew, whose criminal activities appear to be more appealing than his current career path. And so begins the origins of a young space pirate.

Did this guy seriously bring a Furby with him?

It’s fair to say that this film has had its share of wobbles. Directors Phil Lord and Christopher Miller were fired, halfway through production, for creative differences, and Ron Howard was brought in to rescue the project. It’s been reported that he then re-shot 70% of the film.

As you would expect then, it’s not perfect, but let’s be clear, it’s by no means Bantha poo.

The cast certainly should be commended, particularly Ehrenreich; he is engaging throughout, and certain embodies the roguish charms of the character. Although it could be argued that Donald Glover’s turn as Lando Calrissian possibly outshines him.

The story too, fits in well with the franchise, and is certainly livelier and more entertaining than the rather too stern and serious Rogue One.

Its biggest bonus however, is finally bringing back a popular foe from a galaxy, far, far away, who will hopefully return in a bigger capacity.

What’s left are minor niggles, like an annoying robot, whose #MeToo crusade is all too crow-barred in and about as subtle as Wookie at an Ewok only dance; and the Millennium Falcon not only looking odd, but apparently controlled by a child’s scooter handle bars.

For whatever reason, it didn’t light up the box office, and therefore is considered the first dud in the history of the franchise, but that accolade is undeserved.

Han Solo’s origins tale does more right than wrong. It has action, humour, a whiff of romance, and all within a galaxy we’ve grown to love. It also manages not to mention Jedis - nor the force, once - which is an impressive feat in itself.

Despite its many troubles, that cheeky Solo managed to pull it off.