If ever there were an envelope being pushed in the world of animation, it would have Pixar’s colourful hands all over it. In fact it wouldn’t be long before they folded said envelope into a paper plane and set it on a new adventure.

Not satisfied with a producing a number of blockbusting franchises, such as Toy Story, Finding Nemo and Monsters Inc, they’re not afraid to take on more quirky one-off titles, such as Up and Inside Out.

There last two projects however, Onward and this effort, have been more self reflective, exploring the bigger animated picture. 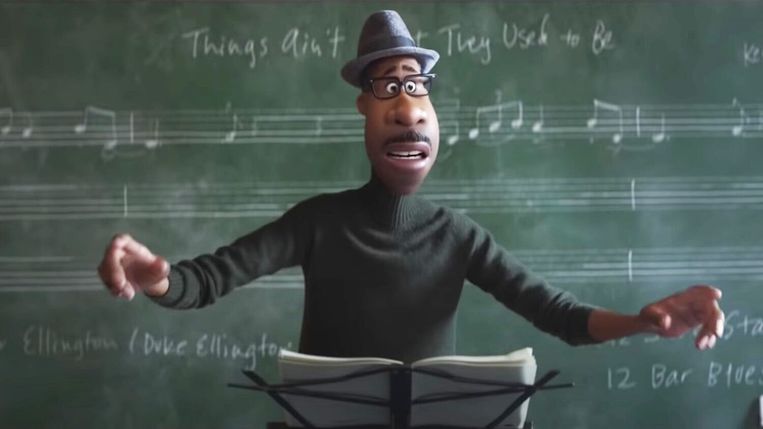 Oh man, this is not music to my ears.

Despite getting some great news that his position of Middle School Band teacher has been made permanent, Joe (Jamie Foxx) is just struggling to get excited. His life-long dream, as a pianist, has been to make it as a jazz musician, but knock back after knock back has lead him here.

Then out of the blue, he gets a call from an old student, who is now a musician, and tells Joe that he might have a spot for him playing with the legendary jazz singer Dorothea Williams (Angela Bassett) if she likes his stuff. And after a trial, she does, and says he can start that night at the club.

Giddy with excitement, he leaves the club on cloud nine, which may go some way to explain how he ends up in trouble on the streets of New York, that wind up with him in a bad way in hospital. It’s there that his soul separates from his body, and ends up in The Great Before, a halfway stop between life and The Great Beyond.

Although he’s told he’s down to go on to The Great Beyond, Joe doesn’t feel he’s ready yet, and is desperate to return to his body on Earth. When he comes across the difficult 22 (Tina Fey), a soul that just doesn’t see the fuss about living, and is happy where she is. If Joe can help her find her ‘spark’, then there’s a good chance he can find his way back home too.

Hey just put me over there, I need to wash my bits real quick.

Although there’s such a vibrant, colourful world that will appeal to the young, this isn’t necessarily a standard family film. It deals with some themes that, quite frankly, some adults may struggle to get to grips with. Essentially, it’s Pixar asking the question of what happens to us when we die, but in a non religious stance, which is wise, although some of its suggestions may resonate with some religious groups.

It’s at this stage that the film stutters with its own narrative, in an attempt to not step on anyone’s toes, by offering a version of the afterlife that gets quite convoluted. It’s all a little fractured, and doesn’t quite gel.

But as it transpires, it kind of knows it runs out of steam as the elaborate premise results in what is a body swap flick, which is far more family friendly.

The film also disappoints, unusually, on the relationship between its two central characters. Foxx and Fey lack chemistry, and Fey surprisingly, doesn’t work as a comedy foil to Foxx’s character at all. There’s little in the way of warmth and connection between them, making it feel awkwardly flat, which is something you don’t expect by Pixar standards.

Where they do excel however, is on the animation front. Visually, Soul is on another level. Nearly every aspect of it is jaw-dropping, from its use of light, textures, reflections, as well as some impressive depth of field work, it is nothing short of stunning. There is one scene, where jazz singer Dorothea Williams id performing in a sequined dress on stage, where the light in the dark club manages to make parts of it sparkle when she moves. It looks like a real dress, but obviously it’s not. If only they focused on that level of detail in the script, perhaps then it wouldn’t feel so stodgy.

It’s certainly a brave attempt at delivering something different however, regardless of the mixed result, it’s heart is certainly is in the right place, even if it’s soul is a little off.