South Park: The Stick of Truth

Let's be honest, games from films and TV shows generally suck. They are usually hastily cobbled together and resemble something that Pac-Man would have vomited all over the screen. And yet, because they carry the official license of one comic character or another, they sell by the bucket load. Sure, they would be met with unanimous cries of "this is dung!" but it wouldn't prevent them from selling reasonably well, nor from the same thing happening again and again. You can understand then why it was difficult to get excited over the release of a game for a washed-up TV show.

1997 was quietly minding its own business, keeping itself pretty much to itself, when a weird-looking cartoon series erupted onto its screens. It was rude and it was crude. It pulled down its pants and mooned not just animated shows, but every show in its butt-erupting radius. South Park had arrived.

The adventures of schoolkids Cartman, Stan, Kyle and Kenny in the small fictional town of South Park, Colorado, proved to be a huge hit for the cable network Comedy Central. There was nothing on TV quite like it then, or now for that matter.

The scary thing is, the show is still going. No, really. Its eighteenth season is on its way later this year. Clearly many things have changed since 1997, and it's fair to say that South Park isn't as relevant as it once was. So can a new video game for a series that's probably past its sell-by date be such a good idea? 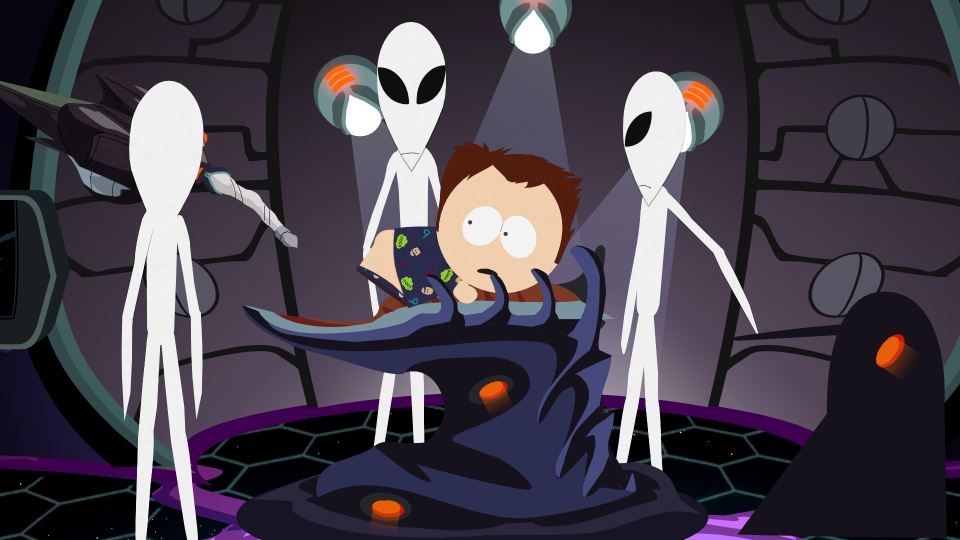 I don't mind admitting that I feel a little on the vulnerable side right now.

You play the new animated kid on the block as you arrive, with your parents, into your new home in South Park. Before you know it, you have been ordered to the magical realm of Kupa Keep (aka Cartman's back yard), where you are greeted by the Grand Wizard himself  Cartman. He explains the tragic plight that he and his followers face, with the all powerful Stick of Truth not only no longer in their possession, but in the hands of their enemy, the elves.

Your first task is to decide which class to begin your journey on. Choose from Fighter , Mage, Thief and Jew. Yes, that's right, Jew. Not normally a class found in your average role playing game, but this is no average RPG: this one also allows you to fart at your enemy, and not just one kind of fart at that.

Much of your time is spent on various quests that will have you scurrying around all four corners of South Park. These quests are frequently interrupted with battles. You will take on many foes in turn-based fights, using what initially limited powers you have. Beat the baddies, and you'll soon see your abilities level up.

You won't be alone either, for most of the fights you will be joined by Butters. Later on in the game you will get the opportunity to swap out for other characters to aid you on your adventures, including Kenny in a dress. Don't laugh, he's got the legs for it.

If you love role playing games and are a huge fan of South Park you will probably think you have died and gone to heaven. That said, the show's creators Trey Parker and Matt Stone have been very hands-on with this project, including scripting the whole thing, and it shows. You don't have to be a fan of the show (or RPGs that matter) to appreciate not only the crude humour but also the love and attention to detail that's gone into this project.

The game's many cut scenes blend seamlessly with the action in the game. Yes, the game is helped by the basic mechanics that the show is still put together by - in a real Blue Peter-esque cardboard, paints and glue kind of fashion - but it works remarkably well.

It's certainly not let down by Parker and Stone's warped sense of humour. Mastering the many fart attacks will take some skill for instance, as you embark on a mystical journey that will take you to places that not only you've never gone as a player, but places you will absolutely never want to go back to again. Certain levels (OK probably just the one) will be like the gaming equivalent of 'Nam: you will visit a place where events happen that can never be wiped from your memory, that you will have to live with for all eternity. And no, we're not talking about the missions in Canada. South of there, and a little further south from there too.

Much of it relies on a schoolboy humour, full of fart and knob gags. But there's something quite weirdly warm and retro about it, reminiscent of (low and) high jinxes in the playground. It's also sharply written and will make you laugh, whether you want it to or not. 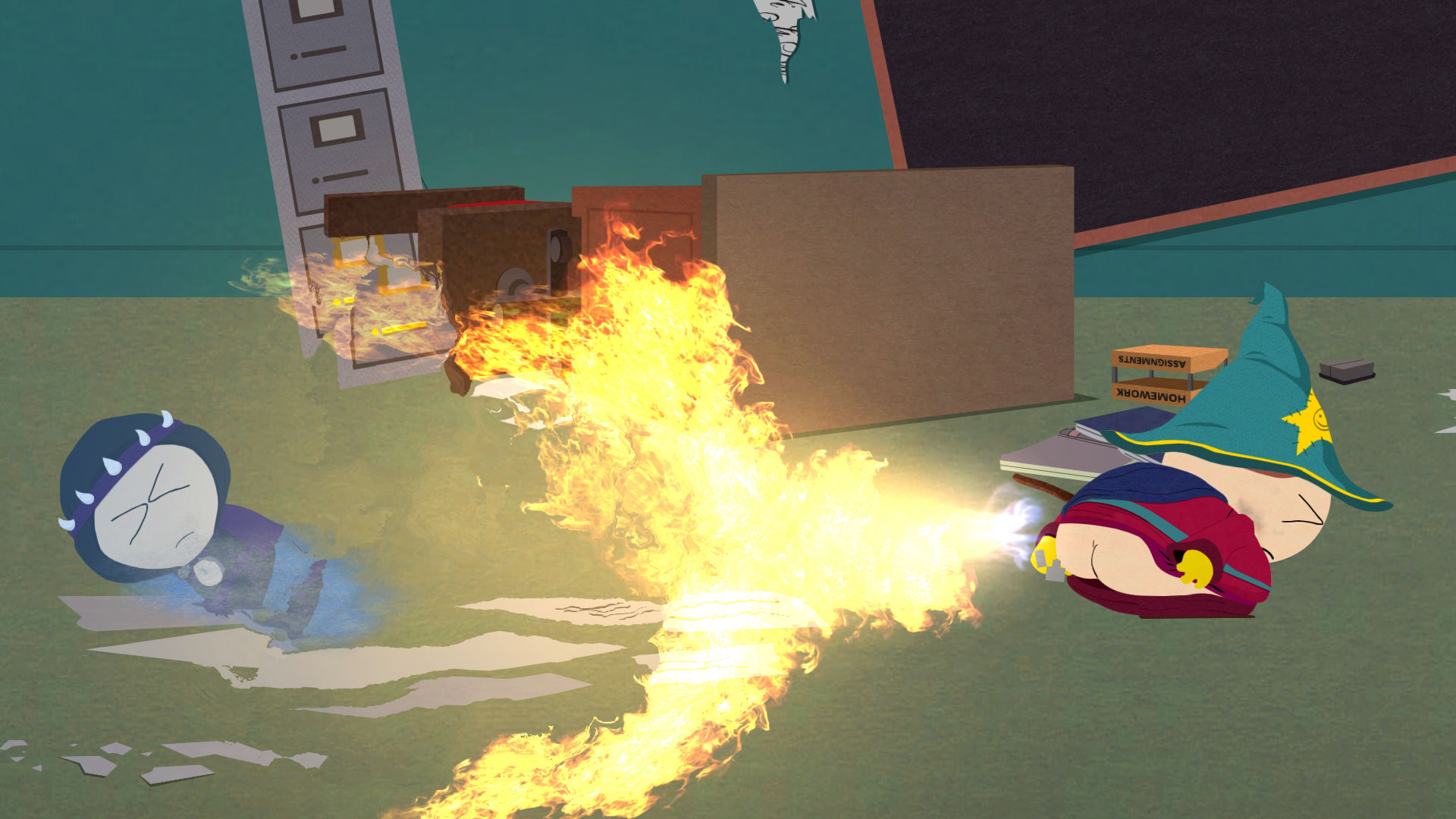 Out of all the TV and film game franchises available, you certainly wouldn't expect the likes of South Park to break the mould. But that's exactly what they've done. Not only is Stick of Truth a highly entertaining effort, it's clearly been produced by a team who not only have a love for their source material, but also for gaming.

It's a right old shame then that the European version is so heavily censored. There are a number of mini-games that have been cut out of the game, and have been replaced by holding cards explaining what we're actually missing out on. What were PEGI (Pan European Game Information who certify games for content) thinking? Well, nothing, as it turns out. Apparently, and here's the real shocker, these sections were cut by Ubisoft themselves. God only knows why, for no-one at Ubisoft is telling. Fair do's if it did come from PEGI but the fact that it came from the game's own publisher is both disappointing and bewildering. We can only assume that some faggoty, Gaylord liberal douche bag of a Ubisoft exec took offense to some of the content. Dick.

It may not be super slick or terribly high res, but it doesn't need to be. In truth, it wouldn't look out of place as an app game on a smartphone or tablet. And yet we should count ourselves extremely lucky as gamers that it has graced our consoles, as it is a game brimming with a huge amount of playability and a warped sense of humour. And as gamers, we can't really ask for more than that.

With the sun setting on the last generation of console gaming, this title acts as a fitting farewell. What's more, it proves that if a show like South Park can get a game so right, there really are no excuses for any more piss poor film and TV game franchises.