Considering his impact on cinema, it’s surprising that Stanley Kubrick only managed to direct 13 features in his career. What could also be considered a surprise is that for his fourth film, he got to direct this big-budget studio epic.

If there were to be a sore thumb amongst his filmography then arguably Spartacus would be it. That’s not to say it’s a bad film, far from it, but compared to the likes of The Shining, Dr. Strangelove, etc, this sword and sandals tale is an uncharacteristic choice.

To celebrate its 60th anniversary, this newly restored, 4K edition has just been released, making it the perfect opportunity to re-examine Kubrick’s work. 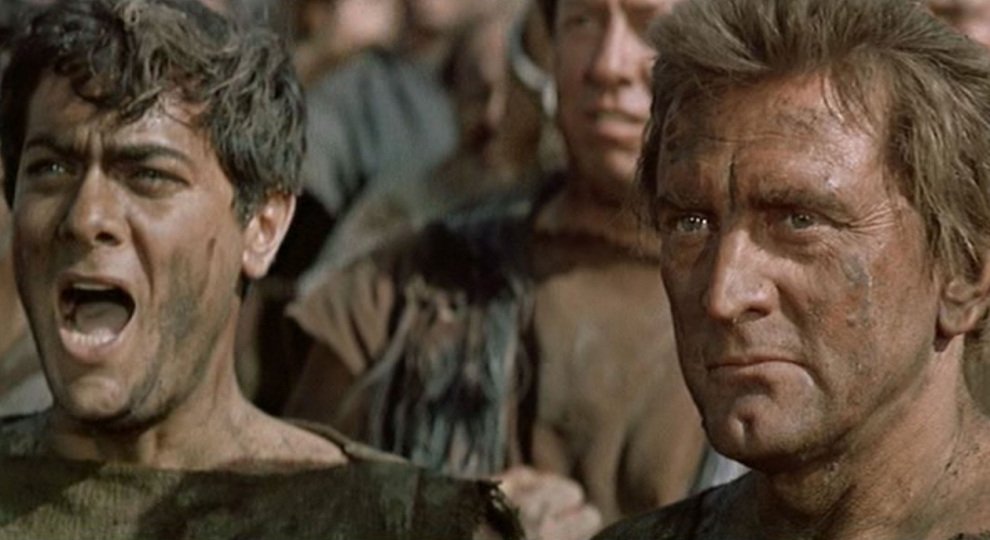 "Now that it's raining more than ever, know we'll always have each other, you can stand under my umbrella, ella, ella, eh...

Born into slavery, Spartacus (Kirk Douglas) finds himself forced into heavy labour at a mining site in Libya. After years of physical work and abuse, he snaps, and attacks one of his guards. He may have got a little off his chest in doing so, but the price is on the high side – death.

Luckily for Spartacus, Batiatus (Peter Ustinov) is just passing by, and sees the potential in him for his business, as he runs a school for gladiators. And so Spartacus is saved and transported to the school.

It’s there that he learns how to be a warrior, in the art of being pitted against fellow gladiators for the entertainment of watching Romans.

Batiatus gets a surprise visit from Crassus (Laurence Olivier), a highly-respected member of the Roman Senate, who has brought some guests with him. They are expecting a bit of a show, which Batiatus is more than happy to put on for them, until he learns that they want it to the death. He explains that as a school, it’s not a particularly good business practice to kill off their pupils before he can sell them on, but Crassus makes him an offer he cannot refuse.

As (bad) luck would have it, Spartacus is one of the fighters chosen, where he is forced to fight one of his fellow gladiators. It is an event that acts as a catalyst in Spartacus, who from that point on, decides that he we no longer be a slave, and is prepared to fight anyone who gets in his way of finding freedom, even if it is the entire Roman empire.

Hmmm well it looks like that lost crown has revealed an entrance to a parallel universe...

Kubrick did a pretty impressive job for what was only his fourth feature, by not only getting four Oscars (although none for directing), but by making $60 million at the box office (against a budget of $12 million, which was impressive back then), making it Universal Studios biggest ever success at the time. Not bad considering he wasn’t even first choice to direct.

Anthony Mann was originally given the job, and managed to complete a week’s worth of shooting before getting the chop, by star Douglas no less, whose production company just so happened to be producing.

Young Kubrick was hired, no doubt off the back of his previous film Paths of Glory, that starred Douglas. And the rest, as they say, is history.

Although there’s not much here that fits in with Kubrick’s style, he certainly appears to be channelling someone else’s, with its epic nod to Cecil b. DeMille. It’s a film that presents itself on a huge scale, making the most of the wide screen format. An example of this would be that Kubrick shipped in eight thousand trained soldiers in the Spanish infantry to play the roman army in a battle sequence. Today, they’d just push a few buttons and turn a few knobs, and the crowd would be created digitally. Knowing that this wasn’t the case here makes it feel just that little bit more spectacular.

In terms of performances, Douglas is relatively restrained throughout. He doesn’t give much away, but when he does, like when he’s sharing a screen with his love interest Varinia, played by Jean Simmons, it’s all the more powerful.

And although Olivier is certainly watchable, giving a rather creepy account of Crassus, it’s Charles Laughton and Peter Ustinov (who won an Oscar for his performance) who steal every scene they are in.

It’s a feature where Kubrick decided that there was no need for any aspect of subtlety, with every part of the film, from the overwhelming score, to the sweeping vistas littered with a myriad of extras, to its three hour plus duration, pushed all out to make an impact.

And as Kubrick shot it on 35 mm Super 70 Technirama – an alternative to CinemaScope – he was almost making the print future proof giving the film its ultra-high definition look, means that this 4K version doesn’t have to work as hard as other restorations often do, giving the film a crisp and luscious look throughout.

Sixty years on and Kubrick’s Spartacus is, remarkably, still very much the spectacle, even by today’s CGI-heavy standards. It is a story told by one of film’s most iconic directors, on a scale that is nothing short of breath-taking.