There’s a saying that goes that there are only two things certain in life, death and taxes. That’s true unless you run a large global company like Starbucks, Google or Amazon, who’d only rather be certain of one of those.

This new indie title acknowledges both of these things on the list, as it dips its toe into both commercial and spiritual waters.

The day starts off relatively well for young Stella, as she has just been given a new job. Initially at least, it sounds nothing more than a cab service, getting customers from A to B. There are a few differences however; the cab they all take is actually a boat, and the destiny is exactly the same for everyone who gets on board – death.

It’s not like Stella, accompanied by her adorable moggie Daffodil, takes them against their will; those that travel with her are fully aware of the final destination, but none appear to be in any great hurry to get there. 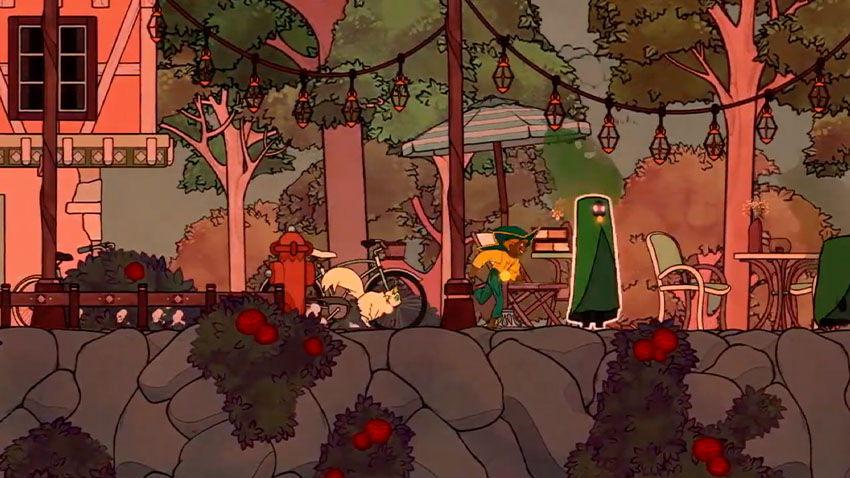 So you see we're creating a unique artisan feel here, so don't think a Greggs franchise would be a appropriate.

So Stella goes about trying to make the journey as comfortable as possible. She builds them accommodation, for instance, learns to get pretty handy in the kitchen, as well as grows vegetables, and fishes from the end of the boat to make tasty meals for them.

But to keep up with their requests, Stella will need more resources, which can be found by visiting various islands, with different materials need for different items.

The more places Stella visits, the more requests are asked of her, as well as more opportunities to pick further passengers up for the final journey. She soon realises that her new job is most certainly a full-time experience.

There are a number of striking elements to this game, the first being its look. It’s beautifully rendered, with everything taking place on a two dimensional plane, with the visual style of a French seventies children’s animation. It’s certainly appealing, with its colourful palette and intriguing characters. 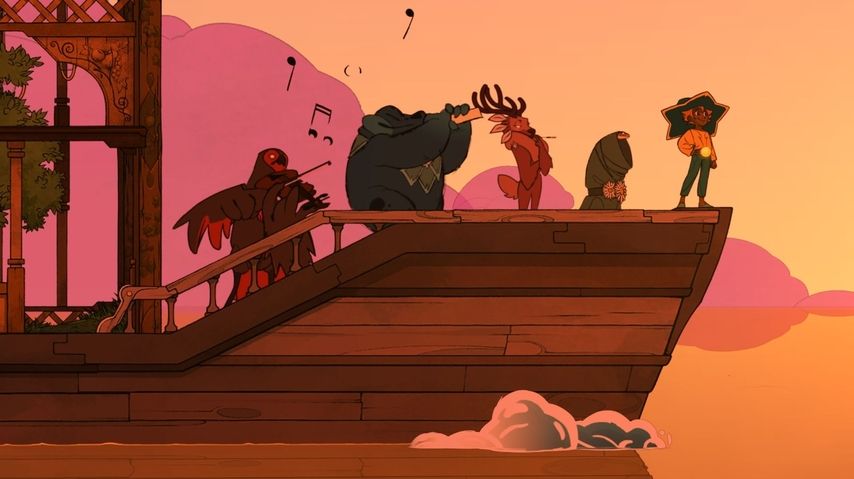 There's nothing quite like some lo-fi grime on the open waves.

It’s really creative with what would normally be a small town/farm etc has been transposed onto a ship. Rooms can built and moved around at will, where they can be stacked side by side and on top of one another, creating a truly artisan floating community, the beauty of which, is that you get to take it with you. In fact it will keep you so busy, stretching your legs on land is a welcome relief.

The next most noticeable element is the control system, with everything pretty much taken care of by the left button. It should feel restrictive, but it doesn’t, far from it. By stripping it back to just the one button takes any stress that could possibly surface out of playing the game. And yet, you still feel very much in control of what’s taking place.

And although it may have a child-like appearance, it’s not a game for children. It’s a title that has clearly been written with an older audience in mind, with adult themes, as they say before some of those saucy HBO shows.

One such adult theme is death. Although not necessarily a major factor, it is looming in the background, as it is for all of us in real life. Characters you encounter aren’t around forever, and part of your job is to escort them to their final resting place. The act is certainly dealt with a lot of sensitivity, dealing with more the emotional impact as opposed to any religious affiliations, with the result being a rather touching and moving process.

There is one aspect of the game that is certainly at odds with the overall sensation of calm and well being, and that’s zip-lining. The programmer who decided to include it must have been in the foulest of moods when they did, as there’s nothing relaxing about the process. It’s also quite sneaky that it is introduced fairly late into the back end of the game, by which point, you’re already heavily invested. It’s the only time in the game when you might actually start stabbing buttons, and waving the controller around in the air as if it’s possessed. It’s mainly needed in the pit of some mines, where some rare resources exist, but instead of just jumping up to one line, you then have to jump from line to line, twisting in the air like the nimblest Chinese gymnast in mid air, to get to where you need to be. It’s not outrageously difficult, but it certainly adds some unnecessary stress into proceedings.

Strip it down to its bare bones and Spiritfarer is nothing more than a management sim, where you grow things, sell things, buy things and upgrade items and abilities. But what prevents it from being nothing more than a colourful spreadsheet is its heart and soul, both of which are very much on display throughout.

Spiritfarer is an incredible journey, where you will get to explore curious islands with their even more curious populations. It is a rewarding adventure that will make you smile, it will make you want to hug and be hugged, and yes, a tear or two may well be shed.

With this style of laid back management sim being quite popular, in the mould of Animal Crossing, Spiritfarer is an impressive example of adding more mature themes to the usual staples, which not only makes it slightly more credible to play, it elevates the genre from not just being simply a management sim, but a worthwhile, magical gaming experience.