With the likes of Disney and Pixar producing such high quality films, the world of animation is hugely competitive. That hasn’t stopped DreamWorks however, who since their debut Antz in 1998, have been producing animated features, albeit with mixed results.

They have had huge success with a number of their franchises however, such as Shrek and Kung-Fu Panda, which have certainly helped as far of some of their more lacklustre features, not mentioning any names like The Croods for instance.

This latest film is also now part of a franchise, as it’s a spiritual spin-off from 2002’s Spirit: Stallion of the Cimarron, featuring the wild stallion Spirit. 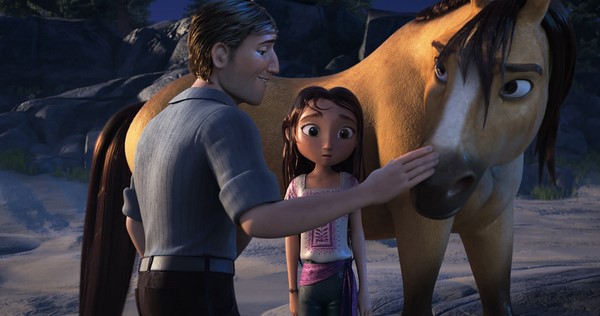 He already feels pretty sticky, which is a bonus.

After the death of her mother, Lucky (Isabela Merced) is sent to her grandfather to be raised, as her father just doesn’t have it in him to bring her up by himself. Ten years later however, after an incident that embarrassed her grandfather who was running for governor, Lucky is sent back to her estranged father, who is now living in the town of Miradero.

It is there that Lucky is introduced to Spirit, a wild stallion, whom she becomes very fond of. But when some no good rustlers want to take Spirit and the rest of his herd far away, young Lucky takes it on herself to try and stop them, regardless of the many dangers involved. 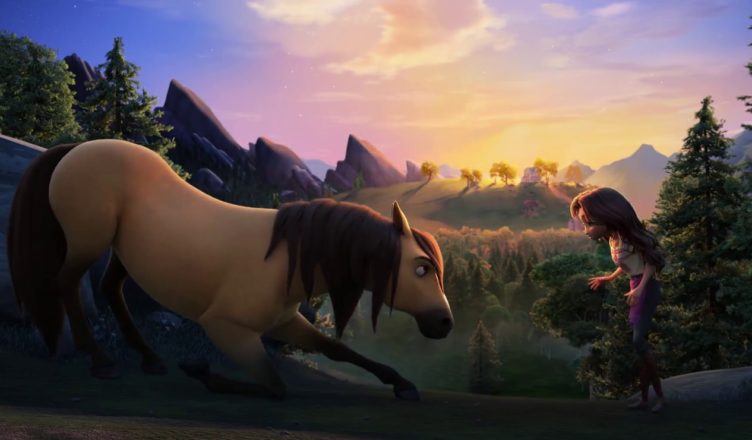 I swear if she barks another command at me i'm biting her head off.

With Disney and Pixar producing such quality animated features time and again, it’s easy to take the genre for granted. Thankfully there’s Spirit Untamed to remind us just how tricky animation can be, with what already feels like a dated effort.

Take its animated style for instance; it is about as basic as can be, from the bland facial models that struggle to lip sync with dialogue, to the animation of Spirit itself, that looks like it’s just galloped out of an animated eighties TV series. Not only is it a disappointing beige, but it lacks personality throughout. It also lacks the ability to look wet too as one scene sees it emerge from water completely dry. It’s a small detail, but the kind of detail that you just know Disney and Pixar would be all over.

It’s also not helped by a generic story and a weak script. The dialogue is as dusty as its setting, and despite the fact that her mother dies early on, there’s absolutely no emotional pull.

To make matters even worse, there a few cringe-worthy songs littered throughout, that clearly want to mimic the success of something like Frozen, but all they do is make your ears hurt.

The most interesting thing about this film is that someone actually has a credit for “horse vocals”; clearly actual sounds from a real horse just didn’t cut it, so they had to get a guy in who can nay like an equine pro.

You would think with other larger animation studios knocking it out of the park on such a regular basis, it would force DreamWorks to raise their game. Apparently not.

Spirit Untamed is a lame effort on every front. And if any animated horse character had to be sent off to the glue factory, this old nag should definitely be pushed to the front of the line.