This quote from the worlds greatest space pirate epitomises everything we feel about Sam Fisher and his Splinter Cell shenanigans. Weve desperately wanted to enjoy crawling around on our knees with night vision goggles on  it sounds like the perfect Friday night out after all  but more often than not, the Splinter Cell series has left us numb from the neck up.

To its credit, this latest outing for the ever-aging Black Ops trained agent, is the closest one weve come close to actually enjoying.

The story is one of...well, were not entirely sure what. It goes on a bit, with a few supposed twists along the way; problem was, none of it was all that engaging. The protagonist Fisher had a major personality bypass at some point, making him one of video gamings dullest lead characters. And despite this time being personal, with his daughter being at the centre of his actions, theres no emotional connection with him in the slightest. It also doesnt help that he has one of the most monotonous voices of any hero either. 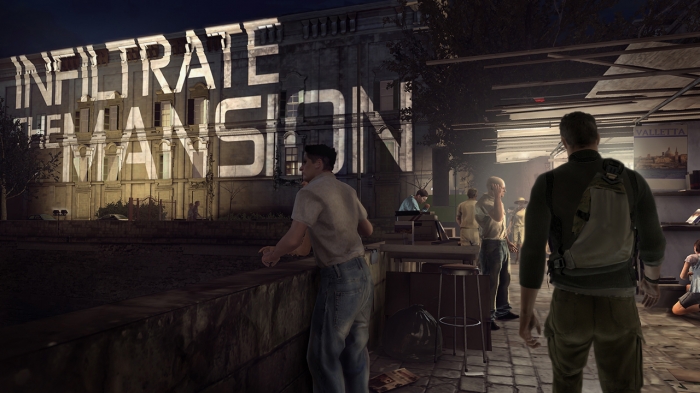 I know that for this mission they said the writing would be on the wall, but this takes the biscuit.

But considering we only ever see the back of him, none of this really matters. Although we did find his run in particular very disconcerting; watch him mince around for a bit, then tell us he isnt a dead ringer for Zoolander?

We dont know whether its because hes getting old or what, but Fisher seems to be using a minimum of gadgets for this outing. Even his trademark night vision goggles only become available towards the end of the solo campaign, and even then they arent essential. Sam has access to an assortment of guns and grenades, and thats about it. Its all about old school with Sam Fisher, in that hes very hands on. By that we mean that he enjoys sneaking up on someone and taking them down with his bare hands. In fact in this particular game, he has to do this more than any time previous, because after a hands take-down, it gives him access to one of the games newest mechanics: Mark and Execute.

This has to be one of the brightest new moves in the series; it allows you to tag a certain number of enemies before performing automated kills on them with one press of the Y button. Not only is it cinematic, but its also essential in clearing out certain enemy-filled stages.

His duck-and-cover system has been improved too. Pulling the left trigger will show areas that Fisher can move to safe areas in combat situations, without being spotted. He glides with Bolero-like majesty across floors, with the grace of Torvill and Dean.

And while he remains unspotted, the screen stays in a striking black and white mode; as soon as hes in danger of being scene, colour begins to appear on the screen. As visual aids go, this one is not only darn useful, but also a pleasing visual experience too.

Another nice touch is in the way your mission objectives are projected on nearby walls and surfaces. And if you ever forget what youre supposed to be doing, you can press a button and up it pops. Its more an aesthetic thing, but sometimes its the little things that you enjoy the most.

This is the only way that queue jumpers will learn.

All these additions certainly improve things greatly, but there are still those annoying nags that just wont go away. Firstly, something which a lot of First Person Shooters are also guilty of recently is the biting the bullet principle. There are no health pick-ups in this franchise, so when Sam gets hurt, if he cant do anything about it, the next bullet will kill him. This means going back to the last save point you past. Sometimes you just dont feel like crawling around on fours; instead, you just want to bold as brass waltz into a group of baddies with all guns blazing. You can still do that here, but only if you want to get yourself killed. If you dont get headshots off first, enemies need about a bucket full of lead before they hit the ground. Versus roughly two and half to your own chest before you die. Its simply not fair. Aiming in third person mode, particularly if youre not in a cover position, is about as accurate as throwing jelly at the treble twenty on a dartboard. Sometimes we wish we could be the baddie, at least you would last longer in the game.

Some of the levels are quite entertaining. One finds Sam in a fun fair, where you can actually see cuddly toys get shot to pieces. This is soon followed by a chase sequence out of the park, which was a break from the norm. Unfortunately though, there were just too many times where we found ourselves sneaking around filing cabinets in offices, cars in car parks and airport hangers. Large grey areas of tedium. One section of inspiration came when Fisher had to manoeuvre through rooms full of invisible moving lasers, using his night vision goggles to get him through. Sadly this was a gem amongst levels of zirconium.

The AI is painfully rigid too. Patrols have a set pattern of moving. You have to be in the right place at the right time to pick them off one by one. If not, youre likely be mowed down where you stand. At one point we found ourselves in a cafe, on the top floor. We were more impressed with the Paninis on the plates than with the AIs ability to hunt us out. For the most part, we were as safe as Anne Frank; in fact, she would have been sniffed out before we were.

And as pretty as the game looks in places, we were disappointed that despite Sams physical prowess, taking a shortcut through a bush is not possible. The bush is not for moving. Keep away from the bushes people.

To the games credit, theyve pushed out the boat in the co-op mode. Instead of just playing through the main solo campaign, theyve included a whole new story line that doesnt feature Sam Fisher. Just be aware that if you take on one of the missions with a stranger, they can go on a bit; we were playing through with a random (who, for some reason, messaged us with why are you killing ppl?, to which we replied because we can) who was a stealthy little monkey. It took around 20 minutes to finish about three parts of the campaign before they decided to pull the plug. We can imagine this happening a lot. You have been warned. Still, at least its an attempt at something over than Defend the Flag modes. It does however feature Hunter, Infiltration, Last Stand and Face off modes.

So yes, Sam Fisher has come on a long way since his humble beginnings in 2002. And this is the first time we not only finished the solo campaign mode, but came close once or twice to actually liking the experience. But Fisher really needs to let go of his past; it will take more than a few new gimmicks before well actually look forward to crawling around on all fours for fun.