The simple fact is the Wii is nowhere near capable of running something like Spore  the quirky (and flawed) original PC game from last year. So to see it have its own spin-off game is no surprise.

The only thing that this has in common with its PC version is the fact you can create creatures. Once youve done that, it quickly hits you that this is essentially a light mix between a RPG and a standard platformer. You roam around a world; get into various battles - which allow you to level up; as well as get rewarded with further body parts that you can equip yourself with, giving you new abilities etc.

And of course, being on the Wii, you can also expect a lot of Wiimote and Nunchuk waggling along the way.

It should be stressed at this point that this title would probably suit a younger gamer. If youre a pro, look away now, theres nothing to see here, move along. Move along. It is a great introduction into the world of role-playing and platforming games though. 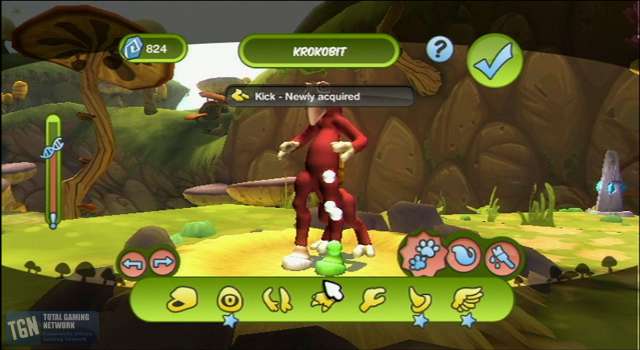 Be honest, does it make my bum look big?

Firstly, creating your creature is good fun. You have a lot of scope to build a unique and freaky character. Whats more, the further you get into the game, the more chances you have of evolving it, so you can continually change its shape, the way it looks etc. The only real problem is that after a while of throwing things on your creature, it can start to resemble an over-burdened Buckaroo mule. But you do have a limit as to how many things you can add to your beastie, as well as the ability of taking off previous parts and replacing them with upgraded parts.

The story is a little on the lame side. A planet is besieged by blue and red meteors; your creature appears out of a blue one; whilst the red ones turn the planets inhabitants a wee bit loco. Your main mission is to absorb the remaining bits of the blue meteors (which act as your currency allowing you to buy and upgrade to better body parts), and destroy the mean, evil red ones scattered around the world.

Along the way you will meet up with other creatures, who will more than likely ask for your help. Participating in these side quests will result in rewards. These quests could be anything from escorting some creatures passed some abusive plants, back to their nests; picking up a fruit for one of them to eat; to joining them in a bit of a jig. Nothing too taxing then.

You are also encouraged to fight with a lot of these critters. Thankfully you have control over whether they happen or not, but you cant avoid them all, as theyre an important part of your levelling up process. To begin with you have to get by with a simple kick and pecking them; as you evolve, the body bits you can upgrade to can make you stronger in battle.

Upgrading will also open up new areas of the world to you. For instance, wings will allow you to, well, fly, and fins mean you can take your creature for a paddle.

Along the way there are loads of things to collect; so much so that youd have to be pretty dedicated/anal to find them all. Still, if you have a youngster to keep entertained, you could certainly do worse than plop them in front of this.

The fact that you use the nunchuk with the game means that controlling your character can on occasion be on the fiddly side; however, as youre not exactly overwhelmed by wave after wave of attacks, its actually quite tolerable.

The different sections of the world have their own distinct look and feel, which adds to the games overall charm. Exploring them, as well as interacting with their inhabitants, is an enjoyable waste of time.

So if you have critters of your own, this could well keep them quiet for a day or two over the coming holiday period.