One of the hardest things in the world must be to run an animation studio. Not only is the process painstakingly slow, it can take a number of years before you get a finished product.

And if that wasn’t enough, you’ve got the likes of Disney, who’ve got underground caverns around the globe, littered with animators working 24/7, to compete with.

This offering comes from China, so they may well have the manpower covered, but does it have what it takes to take on the animation behemoths? 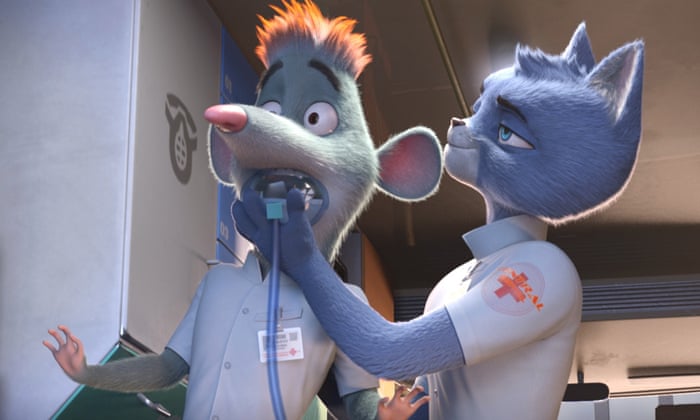 You sound a whole lot better to me now.

Sometimes you can be just too darn good at your job. Vladimir (Kirk Thornton) is a cat agent at the top of his game. But despite getting the bad guy on his last mission, his boss wasn’t best pleased with the collateral damage he caused, of which there was much, so decides to demote him.

Vladimir is sent to a remote base in the middle of the ocean, manned by only one other, a rat named Hector (Dino Andrade). There’s little trouble to get into, so the pair spend much of the time just sitting around and watching TV. Then, out of the blue, the base is under attack, and the intruders get away with some lethal radioactive material.

Although their boss is ready to dismiss them, they inform him they have a clue, leading them to a hospital, so he begrudgingly keeps them on the case.

Working undercover as nurses, they soon realise that the hospital isn’t all it seems, with some evil goings on afoot. Even Vladimir has to concede that if they’re to get to the bottom of this mission, they’re going to have to work together as a team.

This new VR tech is really something.

The studio behind this effort don’t make things easy for themselves; perhaps as they’re based in China they haven’t been allowed the opportunity to check out the competition in the west, so they may well think that talking animals is one crazy idea. So already they lose points for lack of originality.

It’s also not helped by a woeful script. Characters lack definition, dialogue is bland, and the story appears to confuse itself on a regular basis as to what it’s trying to tell. There’s a muddled, ecological message crow barred in there, which would have made more sense if it was delivered in semaphore.

And if you need proof that voice acting is actually a thing, it can be found here. Admittedly the cast aren’t given much by way of the script, but none of them do themselves any favours.

It’s not a complete mess however. Although the actual characters look like they may have rendered with cutting edge technology from twenty years ago, the background artists should get a pat on the back for their efforts; the environs are actually captured in some detail, and the water effects especially make a pleasing splash.

It’s difficult to say how long it must have taken to produce, but on this effort, it looks very much like back to the drawing board for all concerned.