Indiana Jones and the Staff of Kings

Okay, hands up all those whod love to be Indiana Jones? Considering that Harrison Ford is struggling a bit to actually be him, theres even less chance for the rest of us couch potatoes. And lets be honest, wed be more likely to indiscriminately take someones eye out with a whip, rather than take out a baddie.

So, the next best thing would be to play him in a video game. And LucasArts have certainly had a good crack of the said whip at it, but no real winners. Many heart his classic Fate of Atlantis adventure (more of which later), and the idea of Lego Indy was more exciting than the actual execution itself.

With no film tie-in in sight, Staff of Kings is an original story for the Indy one. This Wii version sees you cracking whips, shooting guns, and being ever so manly in hand-to-hand combat. And for the most part, it works really well. 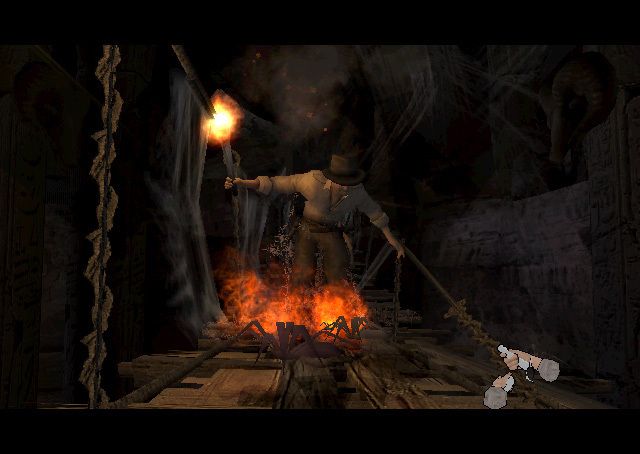 It appears I've set my legs on fire. Hmm... toasty.

His journey takes him to various far-flung locales around the world in search for the eponymous stick. Sorry, staff. The controls work remarkably well, with the wiimote and nunchuk working nicely in unison; its particularly gratifying grappling with evil doers, especially when it comes to headbutting them. But if you dont fancy getting that close, you can always whack a bottle over their heads, or whip them around their feet and pull them to the ground.

Considering this is a Wii game, the environs are of a good and solid state. Some of the puzzles you come across are of a similar vein to those in early Ms Croft adventures. You could be motoring nicely along and then hit your head firmly against a dead end. Of course the solution is either painfully obvious, or just plain painful. And thats the biggest downfall of this title.

In a few places, if you happen to die, the save point can drag you miles back, making you have to go through the motions just to get back to the place you bit the dust. And if the solution isnt obvious, you could be doing this a lot. You know its time to back away from the machine when you find yourself growling out loud, with intent to lash out blindly. This sensation may occur often, so you have been warned.

This is a real shame because the game proves that the Wii and an Indy game could have been the perfect partners. Everything from the great orchestral music, a pretty good Indiana sound-a-likey, and the enjoyable flinging of wiimote every which way, added up to a really compelling adventure. With just a bit more thought, this could have gone straight to the top of the Indy pile.

Many older gamers will wet their pants (if theyre not doing so in a involuntary manner already) at the fact that the old school Fate of Atlantis is included with the Wii version as a dead easy unlockable; however, if you werent a fan the first time around, its inclusion is unlikely to win you over here.

It was certainly a promising direction to send the franchise, but ultimately Dr Jones search for the Staff of Kings wasnt nearly as adventurous as it should have been.