For fans of the Star Wars film franchise, theyve only been disappointed three times (you dont really need to be told with what now, do you?). That number easily goes into double figures for gaming fans that like to feel the force.

In fact theres a certain irony in that the most fun and entertaining Star Wars games to date have been powered by Lego. Force Unleashed II sadly doesnt change anything.

It continues the story of Starkiller (which is the name that Lucas used in an early draft of Star Wars for his hero, later to be renamed Skywalker, fact fans), Darth Vaders latest apprentice. He is torn inside regarding his identity: is he really a clone or is there more to him than that?

On top of this, he has feelings for a certain Juno, who he is keen to be reunited with. Its his search for her that drives the story. Actually thats all the story there is. What mostly happens is that you find yourself at the end of a lot of very long corridors. And then a huge hanger. Followed by yet even more corridors. So if you are a fan of corridors, then this is most certainly the game for you.

To break up all the fun corridor stuff, the game has a few jumping platform sections, which are as entertaining as they sound.

It doesnt help that the Starkiller character has the emotional range of a Bic biro. Hes clearly not a happy chappy, but he just lacks any personality. Luckily for him he has the powers of a Jedi. 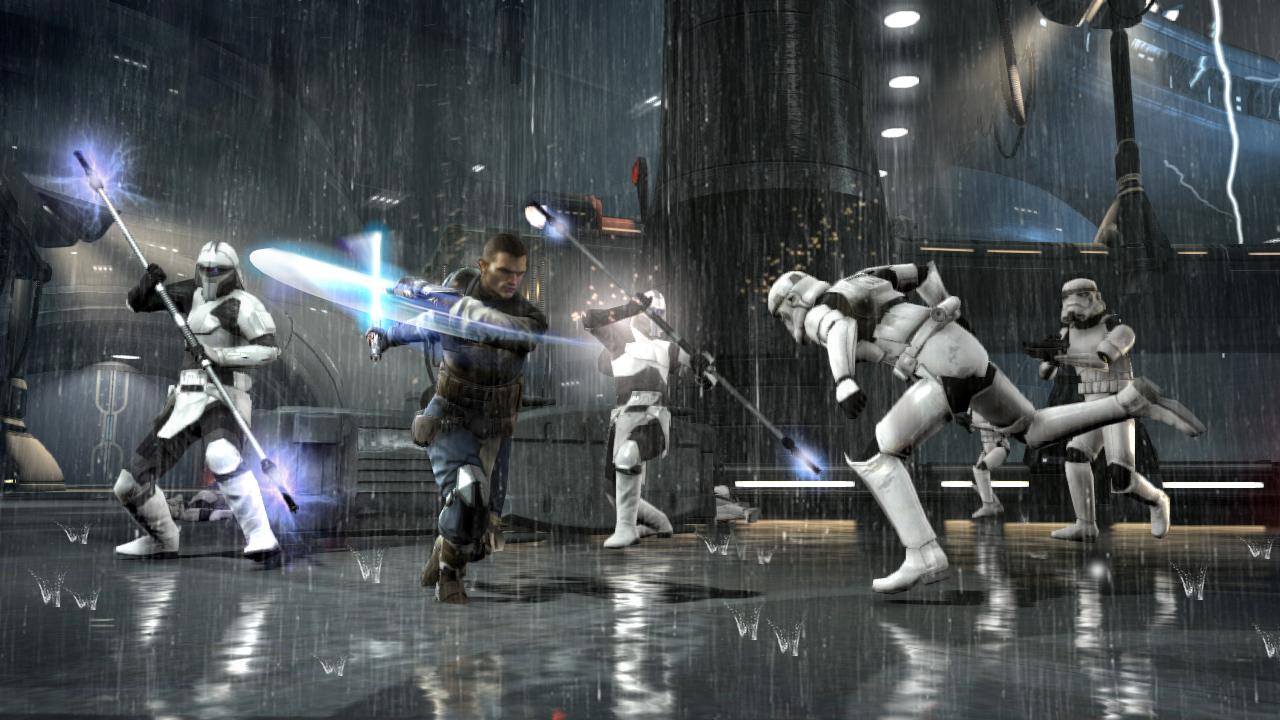 I've told you all before, I'm not into the whole kinky Stormtrooper vibe so hands off!

Despite the games many failings there is still a certain amount of inexplicable joy that can be garnered from using the Force to pick up and throw Stormtroopers about the place. It almost never gets tiring, unlike the level design.

There are also a nice mix of powers to be used, like lightening, push Force techniques, mind tricks etc. Of course being a Jedi means that you have a Lightsaber at your disposal; actually Starkiller wields two throughout, with both being upgradable to help out his fight against the Empire. From a purists point of view however, it would have been preferable to have the option to go old school and choose to play with just the one lightsaber; if it was good enough for Skywalker, it would be good enough for us.

Occasionally there are one too many variations of enemy to take on at once, each with their own technique for being taken down. Its not unusual for you to be battling away in a comfortable fashion, only to not notice an enemy taking you out from a distance and chunks of your life just disappear before you.

From time to time youll also come across an iconic character from the original trilogy, but their appearances are all too fleeting.

One of the biggest disappointments with the game is its lack of vehicle levels. The closest you get to piloting anything is standing on a moving platform, which isnt very close at all. If the Lego Star Wars games can have them, why cant Unleashed? Without them theres just too much button mashing-double jump-block-button mashing action going on.

As far as Star Wars games go, The Force Unleashed II is by no means the most disappointing. However, it falls short, like so many before it, of fulfilling the full potential of the Star Wars franchise. Even with the Wiis MotionPlus add-on we have yet to see a Lightsaber game. Sonys Move controller certainly can deliver the goods, but whether or not Lucasarts see it that way is a different matter.

Until then, this might not be the Star Wars game youre looking for, move along, move along...