There’s something really rather charming about a game that contains the changing seasons over time. Not just that it’s visually appealing as each season brings its own colour, but more for the fact that in the not so distant future, seasons won’t exist.

In its place we will all endure the burning rays of the sun, as they brighten the dry, cracked land beneath our feet that hasn’t seen rain in years. So if nothing else, this game will serve as a pleasing reminder to the good old days.

But if any game can distract from the impending end of days, it’s this one, a nicely turned out remake of the Harvest Moon Game Boy advance title released in Europe in 2004. 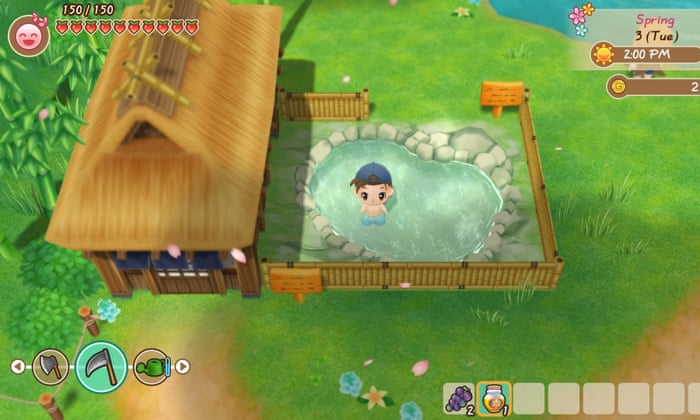 Don't be fooled, us farmers can be playas too...

It begins by you getting news that that your grand-father has kicked the proverbial bucket. But as they say about every cloud (you know, when we still had clouds), his passing brings some good news – he’s left his farm to you!

It’s not all great news however, as the farm is in a bit of a state. So much so that you will have to start again, from scratch, which kind of begs the question what was the old fart doing with it for all this time?

Slowly but surely, you’re able to build the farm up, and soon become a valuable member of the Mineral Town community.

The first thing you should know about this game is that it’s no push-over. Running a farm is no game (except it is here, of course), and it involves a lot of work. This is not more evident than at its very start.

There are crucial decisions that you must take right at the beginning of your career as a farmer. Money is tight, and none of the items you purchase are cheap, which means that more than likely, you will have to spend some time on saving up for them. Not only can you grow various crops, but you can also maintain livestock on the farm too. Doing both from the start isn’t exactly economically viable however, so you really have to plump for one or the other.

As we made our first foray into the world of farming, we plumped for crops. Our thinking was that many of the seeds that can be bought, have multiple yields, so although the time frame to make money is longer, there’s less of an immediate outgoing initially.

And there’s no denying it, the work is a real slog. With basic equipment, it can take all day just to plant seeds and water them. It’s during this time that you notice somewhat of an RPG grind to proceedings. The levelling up process of equipment is outrageously slow – but stick with it. 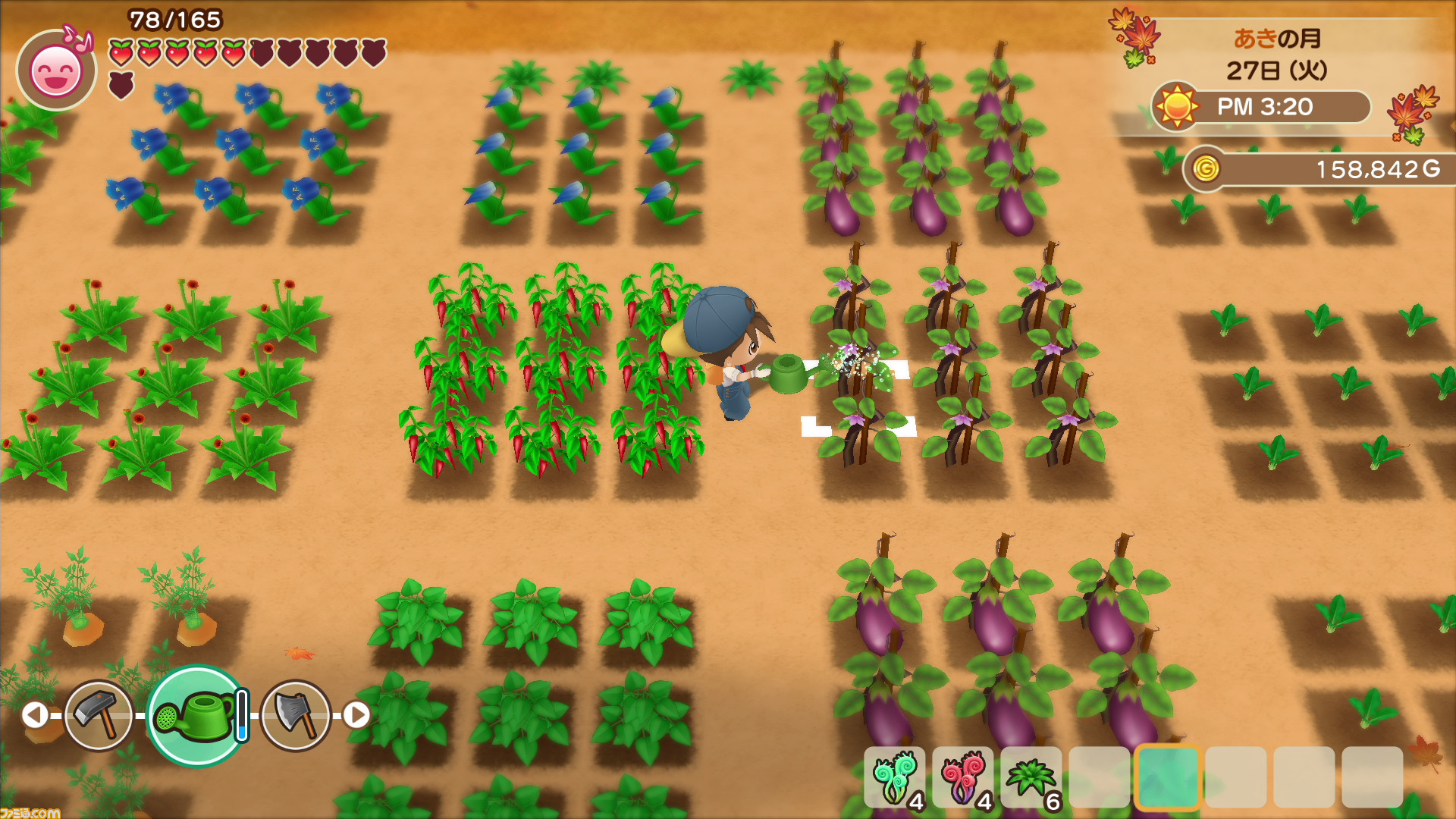 A good place to start would be to focus on the equipment you use most. For us that was the watering can, hoe and hammer, all of which are extremely useful to get your farming business growing.

Eventually you will reach a point where maintaining your various crops will take far less time, allowing you to dabble in other areas.

One of these could be livestock, with sheep, cows, chickens etc all available. The thing is, everything is so incredibly expensive, that you won’t be able to just buy four cows and get on with it, so again give it some thought as to what your plans might be further down the line.

Now when you pop out of your farm, heading south and popping up to the hill on your left, you will discover to valuable assets. The first is the hot spring, which is possibly the most important location in the game. By stripping down to your bathing suit, you can relax and refill any life lost in your health bar, until it’s at its maximum once again, for free. You will certainly take advantage of it because very little is free throughout the game, and every activity you do will reduce your health bar.

Conveniently located next to it is a mine. This is where both the hoe and hammer come into their own. The mines are constructed out of a number of different levels. To access the next level, you must uncover the ladder down to it. This will take a lot out of you physically, so do as the scouts say and be prepared.

It’s in this mine that you discover some precious metals, namely bronze, silver and gold. These are essential as you will need them to upgrade all of your tools. Once you have surplus, you call also sell them on, just remember, even the price of gold isn’t all that here.

But these aren’t the only things you need to worry about. As the game’s title suggest, the seasons play their part. For instance, only certain crops grow during specific seasons, so most definitively keep an eye on your calendar; if you haven’t harvested your crop fully before the seasons change, they will all die during the change, and you will lose any profit you would have made from them.

You also need to factor in that nothing will grow in winter. Don’t panic however, as you will have other opportunities to make money during this time, and it will be most prurient to keep an eye on the terrain, as there’s every chanced you will finally have access to areas you couldn’t before.

What the game also does, rather cleverly, is drip-feed you certain elements of the game, that will allow you to access it a little deeper, including the ubiquitous fishing outings, help from a bunch of curious oddities, as well as a dalliance in the see-saw world of romance.

It’s difficult to convincingly convey how charming this game is. Although the graphics are hardly mesmerising, its visual simplicity is really quite endearing. And even the weather elements that change with every season, bring their own level of whimsy.

It’s pleasing look shouldn’t fool you though, as there’s a surprisingly deep RPG engine purring just under the arid surface. If you want to upgrade, you have to work for it, toil in your field, cultivate those crops, take care of your livestock, and numerous other chores that need to be taken care of. But when you have that upgraded hoe in your hand, damn, do you feel that you’ve really earnt it.

And despite its seasons passing, unlike other titles with a similar look and feel, when you save it, you’re saving the game at exactly that point in the year. So when you go back to it, you pick it up from exactly that point, so the game’s world only exists when you visit it. This means that when you do decide to play, there’s always plenty to do, and you’re not just popping in to check on its progress.

Story of Seasons: Friends of Mineral Town is a well-crafted gaming experience, that delivers pretty much all you could possibly want from a farming sim, and so much more. Just like many of its tasks, the more you dig into the game, the more rewarding it is. And it will definitely grow on you – a gaming gem.