There’s only one real reason for anniversaries and that’s to make you feel old. Sure, you can celebrate whatever the anniversary stands for in some way, but ultimately its very existence is to remind you of your own mortality.

Take this release from Sega; a celebration of one of their most fond titles, Super Monkey Ball, that was released twenty years ago for the Nintendo GameCube. Of course one person’s celebration is another’s examination of a period of missed opportunities and heartache. Maybe, maybe not.

Either way, those cutesy monkey-filled balls are back for more platform rolling antics as it’s time to go bananas once again. 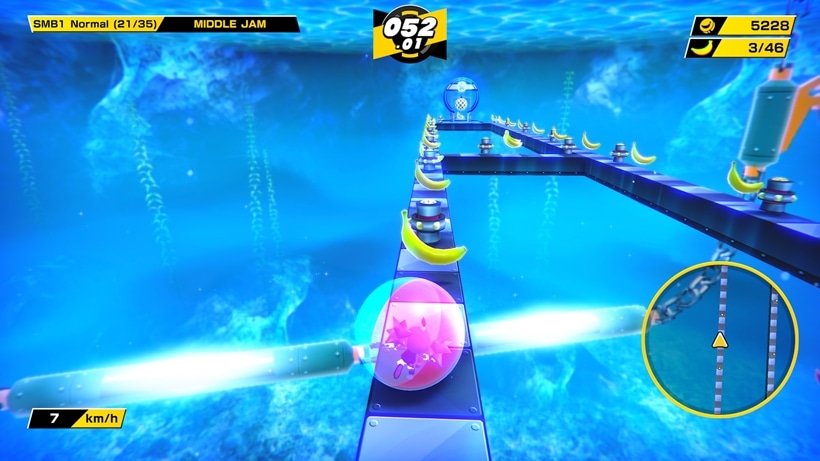 Sonic got the feeling that the Ninja Warrior courses got a whole lot harder.

The premise of this franchise is a simple one; navigate your ball across a platform to reach your goal. There are also bananas to be collected along the way, what could be simpler? Well, not this game, that’s for sure. Although the game-play is relatively easy to get your head around, its execution is far from it.

It doesn’t help that the game ramps up the difficulty from the off; after the initial introduction levels, the game pretty much laughs in your face taunting “go on then”. And to be fair, you may have the confidence to take it on at first, although even fairly early on, the idea of completely the level having collecting all of the bananas available soon becomes a mountain just too high to roll up.

But at some stage you will meet your nemesis. It’s the kind of game where every player’s nemesis can be a different one. For us, we found a level on the third stage to be our Achilles heel; it’s not particularly difficult, you roll down and there’s moving platform going around, with two slots open to get access to the goal. Try as we might, we’ve yet to get our ball in that slot, as it were. You know you’re struggling when the game asks you if you want more time to complete the level. Thanks game, but we don’t need a reminder of how badly we’re playing. Still no doubt once our stubbornness has been worn down to a flat surface, we will no doubt take the game up on its offer.

The fact is, the game is as uncompromising as it has always been as far as its difficulty is concerned. It’s the type of game that, regardless of its cute appearance, is guaranteed to make you pull your hair out. The developers clearly realise this, the sadists that they are, and have included a helper function; you’ll know it when that condescending message pops up that pretty much says ‘you’re clearly struggling on this level huh, so here’s some extra time to help you out’. And if that doesn’t work out for you – and in all honesty it didn’t always for us, only increasing the time we were frustrated on the level – there’s also the ability to skip the level. We know, it’s not what any of us want, but as a last resort to be able to move in, we’ll begrudgingly take it too. 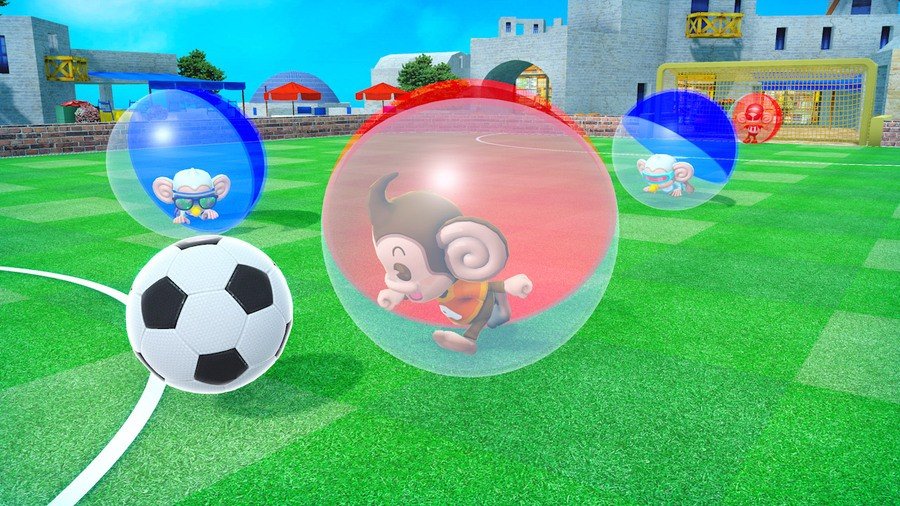 Putting Ronaldo in a cryogenic ball seemed the next logical step.

There’s also a slow motion feature that can be unlocked, but we found all this did was highlight just how poor we were, by stretching out the fact, which didn’t help anyone.

So it can be hard, but the fact is, that’s ok. The beauty of the game is that the levels are bite-sized challenges, that are timed, so really don’t last that long. So you can just dip in and out, without working yourself into too much of a monkey frenzy, without investing years of your life, like so many other games do.

In a sense, the main game is just half the story, as the mini-games make a welcome return. There are twelve of them in total, so there is bound to be something for everyone: Monkey Race, Fight, Target, Billiards, Bowling, Golf, Boat, Shot, Dogfight, Soccer, Baseball and Tennis. There’s a nice variety here, which is just as well, as not all the games are likely to suit everyone’s tastes: Baseball in particular felt like a game that was never going to end, and after what felt like months of innings, with neither us or the CPU managing to score, it felt like they were taking realism of the game too seriously and we had to pull the plug to keep our sanity. Thankfully we enjoyed our time fighting, golfing, and ‘soccering’ etc, which is more than plenty.

For those that remember the original games, of which this is pretty much a compilation of, the game will be an extremely enjoyable roll down memory lane; all the ingredients (including all those bananas) that made those such fun to play are here, making this sparkly, enhanced remastered outing the most definitive version of the game yet.

If you’re new to the franchise, and enjoy a quirky puzzle platform experience, then Super Monkey Ball Banana Mania is certainly a title worth getting your hands on; it’s no doubt challenging, but it’s difficult to get mad at a game that sees you pushing a cute monkey in a ball around.

So take your monkey ball for a spin and go bananas.