Nearly five months after its release in Japan, Some of Nintys most famous characters, as well as some less known pixelated faces, put their fight faces on for European gamers. Was it worth the wait though?

Theres no denying that this game (the third in the series, and the first to grace the Wii) is comprehensive. The developers have gone to a lot of trouble to make this version the most complete thus far for fans, with more modes than you can wiggle a wii-mote at. There are a mass of playable characters  35 in total; these range from gaming icons like Mario, Sonic and Solid Snake, to the slightly more obscure ones like Pit (from Kid Icarus), Meta Knight (Kirby) and Marth (Fire Emblem). A lot of attention to detail has gone into the background arenas too, as well as an impressive soundtrack. 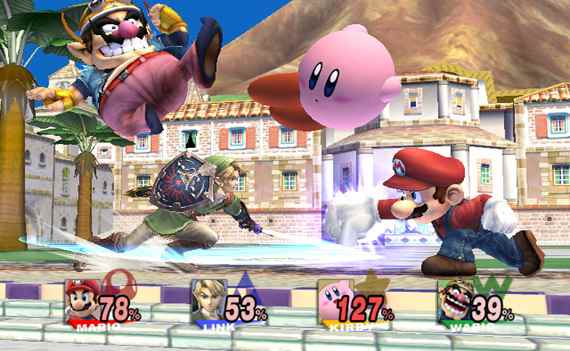 You dont need friends to play with either, as not only can you play online  even though it can suffer from considerable lag at times - but theres also a new adventure mode to explore, impressively entitled The Subspace Emissary. The plot isnt worth mentioning, as its merely an excuse to get a myriad of characters from A to B. What you essentially get is a hybrid of Super Smash with a really dull 2D platformer. You move from left to right, jump a bit, punch a bit etc. Considering Nintendos excellence for platforming titles  they virtually invented the genre after all; this effort is both clumsy and dull.

Up to four characters can battle it out on screen in a well-rendered location, using specific moves and weapons to them. The player who gets knocked around the least, wins. Heres the rub though  its difficult to win against a button basher. Without any finesse or regard for perfectly timed moves, someone who can just repeatedly tap the buttons can, more often than not, beat you. And there really is only one way to beat a button basher, and thats to button bash right back. Its at this point that fun gets up off the sofa, stomps out of the room and firmly slams the door behind him.

The real difficulty with this game however, was trying to ignore the feeling of just being left completely under whelmed by the brawling experience. Fans of the previous titles will no doubt scoop it up and devour it like it was the best thing ever. And its easy to appreciate that they could feel that way about the game, however, if youve never mêléed with the best of them before, you could, like me, just wonder what all the fuss was about.