I Dreamed A Dream

It was difficult not to get swept up in the internet sensation that was Susan Boyles first audition on ITVs Britains Got Talent. Her appearance  both on the show and her physical look  caused a huge amount of interest around the world. The upshot of this was that everyone was surprised how such a frumpy looking biddy could have such a great voice. Which is odd, when you think about it, when nothing is said about the reverse  why dont people make just a big of a deal out of the fact that Cheryl Cole couldnt carry a tune even if a life (preferably her own) depended on it? Still, she does have silky smooth hair, so that kind of makes up for it. 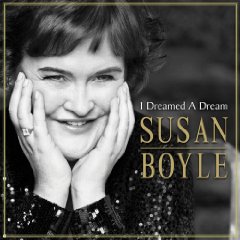 The only real surprise about this album is that its taken so long to get here, considering she first appeared on our screens back in April. Especially when you take into consideration that all the songs are covers, its difficult to comprehend why it wasnt pushed out further to capitalise on her success. Having said that, the album has done pretty well for itself; its a double platinum seller already here in the UK, and achieving platinum number one status in the US.

So, rinsing off all the hype, whats actually left? Well, an eclectic selection of songs, delivered with real heart. If one takes Boyles voice at face value, as it were, its fair to say that its far from being truly remarkable. Thats no slight on her obvious talent, considering her lack of vocal training. Having said that, her voice is certainly easier on the ear than, say, that of Katherine Jenkins, for example; Theres less shrillness and more certainly more depth on display.

Thats not to say her voice doesnt shine. Its difficult not to feel some kind of emotion when she sings her anthem I Dream a Dream. Its beautifully produced, and simply lets Boyles voice tell its story.

In fact, the entire album is beautifully produced, mostly understated throughout, giving centre stage to the 48 year old Scot. As commercial cash-ins go, this one is certainly on the money.

Her version of Cry Me a River could almost be her auditioning for the next Bond song. She turns on the siren in her with aplomb.

And although she does well with How Great Thou Art, it will be difficult to listen to it on a regular basis post Christmas. The same can be said for her version of Silent Night.

There are some pleasant and surprising song choices though, particularly the single Wild Horses, The Monkees Daydream Believer and Madonnas Youll See. Each and every one of them you just wouldnt expect on an album like this, so credit where its due.

All in all, its difficult not to believe that Susan Boyle deserves every bit of success that has come her way. Rather her than some talentless teen, who manages to sell records on the back of being a bit more attractive than someone else. Susan Boyle definitely has talent, and this album is the perfect showcase for it. Whether she has a long term career however, only time will tell.

For now though, if the song that got her here still gives you goose bumps, then you should probably expect a similar bumpy experience with this album. And for Susan Boyle at least, it looks like dreams can definitely come true.