The news that Robbie was returning to Take That was greeted with the kind of reverence that suggested that their John Lennon had returned to the fold. 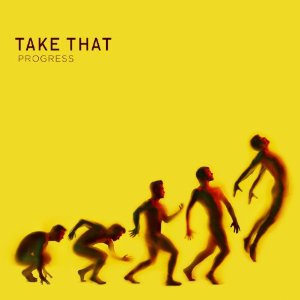 Much has been made of his fifteen year hiatus from the band, but in the grand Take That scheme of things, hes only been absent from two of the bands six studio albums, with Progress being the sixth. Ironically, theyve released almost as many Best of compilations, with the total currently standing at five.

Its difficult to understand the popularity of the band; as boy bands go, their musical legacy to date has hardly been overwhelming. The music has always taken second place to the concept; five cheeky northern chappies having a laugh and that.

Progress sees a definite change in direction, with the band taking a sombre and serious approach to their music and perhaps even life itself. Perhaps too seriously. Theyre proper grown-ups now, and want their music to reflect that fact. They almost pull it off too.

Just to make people doubly sure of his return, Robbie kicks off the album with The Flood, which is also the first single. Robbie sounds quite serious throughout, with lush string arrangements backing him just to reinforce how grown up the song is. Sadly theres just no getting away from the fact that its all a bit too wishy washy.

The tempo most definitely gets turned up a notch or two for S.O.S. Little Mark Owen shares the vocal duties with Robbie on this one; its frantic, frenetic stuff, with a surprising amount of oomph.

As soon as the delicate piano riff starts on Wait, its obvious that this is the first of the ballads. But wait, out of nowhere it takes a left turn into an electro-fuelled jaunt. Its only let down by a damp ballad-like chorus.

Kidz has more electro attitude, edged with a darkness rarely associated with Take That, not in a good way at least. Its borderline indie music, thats what it is.

With whispery, restrained vocals, Pretty Things has a retro feel; its Robbie doing melancholy which you dont get to hear every day. Its a subtle, sweet nugget of noise.

The idea of splicing two styles of music together continues with Happy Now. Talky, electro vocals bounce along, broken up with the occasional Bee Gees esque falsetto chorus. Were well into the second half of the album by now, and its safe to say that this doesnt feel like normal Take That territory here.

Robbie takes the lead with Underground Machine. Again, its not what you would normally expect from a boy band. Like a lot of the album, theres a definite electro-eighties vibe going on here.

With What do you Want from Me?, our Mark takes centre stage with a power ballad. Problem is, its always been difficult to take him seriously as an artist. After all, hes hindered by that silly accent; hes like a modern day George Formby, so when hes trying to be all heartbroken, its greeted more with a smirk than anything else.

As soon as the catchy Affirmation starts, it prompts a query as to who is actually singing it. Turns out that its actually Howard  singing! He doesnt do a bad job of it either.

Bringing the album (almost) to a close is the drippy ballad Eight Letters; it was inevitable that a dreary attempt at a love song had to make an appearance at some point. When Gary sings eight letters, three words, one meaning, it sounds like it ought to be followed by a cryptic clue to a crossword, but hes just going on about love and stuff. Its bland and has the emotional depth of a junk mail text message.

Dont turn off that CD too prematurely however, as you would miss the hidden track Flowerbed, sung by that other quiet member Jason Orange. It sounds Vangelis-inspired, and theres nothing wrong with that.

The fact that this album is devoid of pappy pop is its biggest surprise. And with no disco covers, or up tempo boppy tunes, its actually really difficult to dislike. Its obvious that theres been some experimenting with different sounds and a fresh approach to their music. It doesnt always work, but kudos for trying something different at least.

Progress is just that for the band; its produced with a deft touch and delivers something new from the boys. Sorry, men. Its also proof that there may well be signs of more life in the old dogs yet. Whether Robbie is back for good however, is an entirely different matter.