Considering the original black and white US TV show only ran for two years (64 episodes in total) in the late sixties, the Addams family have certainly enjoyed an enduring legacy.

They were created by cartoonist Charles Addams in 1938 for The New Yorker magazine, which was there home until they made the move into TV in 1994. It was there that the iconic look of Gomez, Morticia, Wednesday and Pugsley, really came to life, as it were.

This new animated tale is the first big screen outing for the family since Barry Sonnenfeld directed both his much-loved, live action versions, ending with 1993’s Addam Family Values. 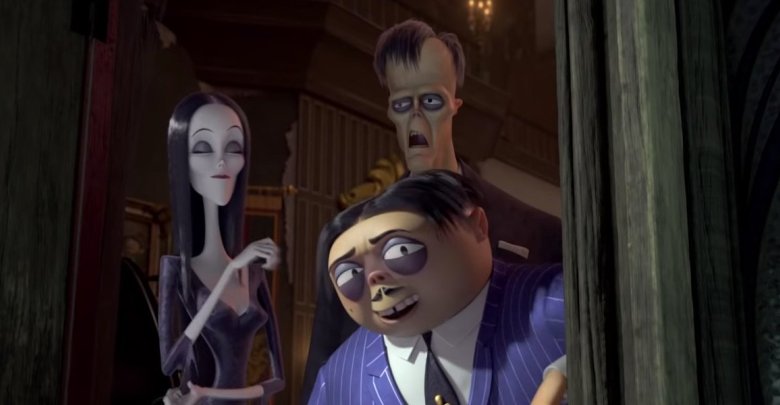 Boy, that Simpsons lot next door have really let themselves go.

After being chased out by an angry mob, the Addams family are forced to relocate. Considering their need for seclusion and their penchant for the morbid, they find exactly what they need – in New Jersey.

Atop an imposing hill, they set up home in an abandoned mental asylum, which Gomez (Oscar Isaac) and Morticia Addams (Charlize Theron) feel is the perfect environ to raise their two young children, Wednesday (Chloé Grace Moretz) and Pugsley (Finn Wolfhard).

They are left to their own devices for many years until property developer and reality TV host Margaux Needler (Allison Janney), who has been busily building a community called Assimilation all around them, decides that their house on the hill is an ugly blot on her well designed cityscape.

She believes she has the skills to either get the Addams on her side, or get them out. But Margaux isn’t as prepared for this particular family as she thinks, as they are dead set against being pushed around. 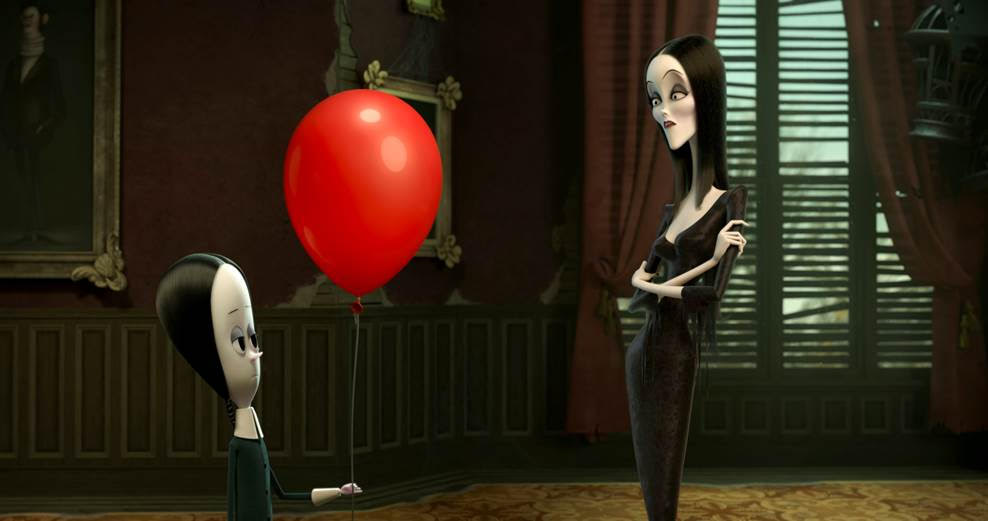 Was the clown supposed to run away mommy?

Because of the strong groundwork that Addams did with his original cartoons, which he even helped develop for the TV show, much of the heavy lifting was already done for directors Greg Tiernan and Conrad Vernon.

All that was left for them to do was concentrate on the visual style and story. Remarkably, it’s on these two counts that their film suffers the most.

Considering how advanced technology is in the world of animation, there was a genuine opportunity to take an iconic franchise and give it a new lease of life. Sadly, that’s not what happened. That’s not to say the animation is poor, it’s not, but considering the impressive nature of the medium now, with the bar set nearly ear bleedingly high, the result is decidedly average.

And then there’s the story. Again, particularly with some truly remarkable characters to play with, this effort feels like a missed opportunity. The premise is sorely reminiscent of a first thought, that barring no other viable efforts, they just went with. It’s perfectly perfunctory, and you can’t get more damning than that.

Clearly big things were expected, especially when you consider the glitzy cast involved, but even their performances feel by the numbers.

Not that the filmmakers will care; the film had a relatively small budget (which probably explains a lot, with much of it no doubt going on voice talent) of $24 million, and rustled up a very nice return of over $200 million. So an inevitable sequel is planned.

To be honest, if you don’t have a history invested with this particular family, the film works perfectly well as a generic animated kids film. But if you have a soft, pale spot for theses original Goths, then this one is unlikely to take pride of place in the family album.