If we’ve learnt anything from films, and let’s face it for many of us it’s our only source of learning, it’s that more people fall in love in New York City more than any place on earth. It’s just a cinematic fact.

By that reckoning, you then have to consider that it must also have as many break ups, which is where this new rom-com comes in.

You see, this is how my TV show would look!

There’s nothing quite like young love, so it’s a real, heartfelt pain when it ends, which is exactly what Lucy (Geraldine Viswanathan) is going through. She feels like her whole world is coming to an end, when she gets into the cab she hailed on her phone. Her driver is muttering something, but he doesn’t understand the crushing her heart is suffering from at that minute.

It takes until she gets home for her to understand that she hadn’t gotten into a cab after all, just some random stranger’s car on the street. Luckily for her, Nick (Dacre Montgomery) is one of the good guys, or so he says.

He’s in the process of putting together a boutique hotel in the city, which he hopes to finish one day. It’s there that Lucy pins a keepsake from her relationship, a tie, to the wall, and so is born the Broken Hearts gallery. With a background of working for a top New York gallery, Lucy thinks it’s an idea that could just take off, and thinks the hotel could be just the place for it to be.

But with nearly everyone she knows dealing with relationship issues, herself included, it’s going to take some work to get it off the ground. 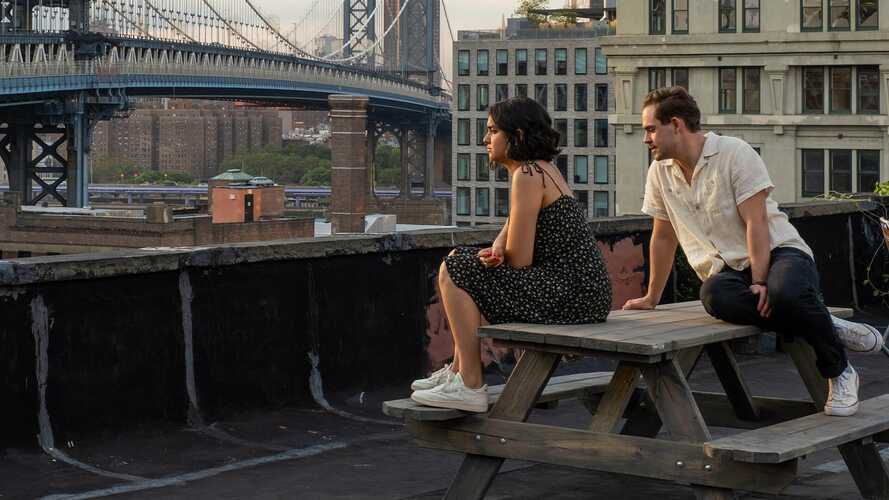 Look I'm sorry i threw your puppy off the roof, but it was either him or me.

There’s been somewhat of an evolution of late, when it comes to young women in NYC falling in and out of love. One of the biggest progressions was the TV series Girls, created by and starring the hugely talented Lena Dunham. The series was a raw examination, that didn’t hold back, as its main protagonist Hannah (Dunham) and her friends, navigated the very choppy waters of the city dating scene. It was brutally honest and sharply funny, offering a more realistic approach all round.

On top of that, we’ve also recently had the anthology series Love Life, starring the extremely affable Anna Kendrick, in yet a further examination of living and loving in NYC. Her character even worked in the arts, as Lucy does here. And although the series didn’t quite go as dark as Girls did, it was once again a grown up look at the real heartache that takes place.

Unfortunately for this film, it feels like a backwards progression for the emerging genre, with an all too glossy, Hollywood approach to the material.

Having written the screenplay, Natalie Krinsky also makes her directorial debut, and although energetic, it’s all too limp. Her writing tries to impress at every moment of every scene, with spunky dialogue delivered as if it were a Woody Allen film. That would be OK if it wasn’t for the fact that every individual in the film is made to be an interesting character, with everyone attempting to outwit everyone else. It’s like an episode of Friends with the cast fuelled by quality cocaine throughout. In doing so, Krinsky inadvertently sucks all the reality out of the film, creating a realm of pure fantasy, making it difficult to relate to on any level. In trying too hard to be a smartass, it loses any sense of real heart the film may have.

The script certainly isn’t helped out either by a mainly inexperienced young cast, who although exuberant, struggle to give their characters any real depth, resorting to simply machine-gunning the delivery of their lines, to come across as cool and aloof.

But despite Krinsky keen to have her dialogue be seen as sharp and funny, it’s crow-barred into a standard, generic storyline that is dated as it comes, making the film unbelievably obvious and predictable.

With the likes of Girls and Love Life showing how it can be done, there’s no excuse for The Broken Hearts Gallery to be a disappointing throwback to uninspiring values for young women presented on film. Seriously, it’s heart-breaking.