A recurring theme in cinema is that the dead just don’t die. Death never appears to be an agreeable option for some reason, and the necessity to return, in one form or another, is always too strong.

Invariably, they also happen to have an evil agenda too (unless they’re the likes of Casper the ghost), so not content with just returning, they want to spoil the party for all those still breathing too; they want to possess a child’s toy to kill you, or even a family member, or simply eat your face off.

This horror film is the perfect example of this, featuring as it does, one member of the undead community keen on spreading misfortune of the highest order. 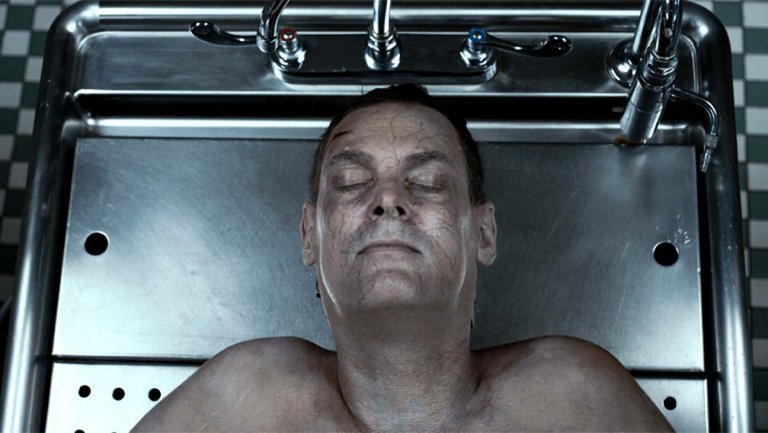 Travis wasn't completely happy with this latest method of washing his hair at the barbers.

Welcome to the Metro General Hospital psychiatric department, where you don’t have to be mad to work there, but helps if the patients are.

Trying to mend the broken heads of the patients there is Dr Daniel Forrester (Shane Carruth). During one shift, he’s presented with a patient (Jeremy Clark) who literally turned up out of the blue, naked, in a catatonic state. His gut instinct is to admit him, which he does, even if it means bending the rules somewhat.

After some serious medication, the patient becomes responsive, but still has no knowledge of who he is or even what his name is. After a further session, he declares to Forrester that he does remember something of his past, that he had died and has returned from the dead with an evil presence inside of him.

Once the patient had finally opened up to him, even if it were nonsense, Forrester at least felt justified for admitting him, even if he didn't exactly follow protocol.

Meanwhile, Edward Graham (Bill Feehely), a pathologist, is trying to track down a dead body that was reported by the hospital, a John Doe, that he’s supposed to be doing an autopsy on. The weirdest thing is however, is that it appears to have gone missing...

For the last time Brian, I'm not playing Hide and Seek with you.

You can tell that writer and director Billy Senese’s film pays homage to horror films of old. At times, it resembles films of that genre from the eighties, with a faint whiff of early Cronenberg about it - without the excessive blood - and others of that period.

Its pacing is initially slow, but does manage to build welcome intrigue. It’s just disappointing then that after all the solid groundwork, Senese resorts to an all too generic ending. The opportunity was there too, to deliver something slightly more original, as he had constructed this two stranded storyline featuring the psychiatrist and the pathologist, who were unknowingly both focusing on the same individual. Sadly, he just doesn’t make the most of it.

There’s certainly nothing wrong with the film’s retro feel, it’s just a shame that after creating an eerie premise with promise, it concludes with an underwhelming (un)dead end.