The Eyes of Tammy Faye

If you’re looking to get into a business that has a long history of making serious money, look no further than religion. Sure, it’s often at the expense of others, so it’s just as well that most gods appear to be very forgiving.

A proven good little earner in the US has been the advent of the televangelist; with God being a bit on the difficult side by only working on Sundays, evangelists brought his word to the medium of television, which meant that in a lot of cases, he was accessible 24/7.

One of the most successful purveyors of God’s word on TV were Jim and Tammy Bakker, who together created the PTL, a Christian television network, that became hugely successful.

This film explores the rise and fall of this popular couple, who took the word of God, and managed to make a pretty penny from it. 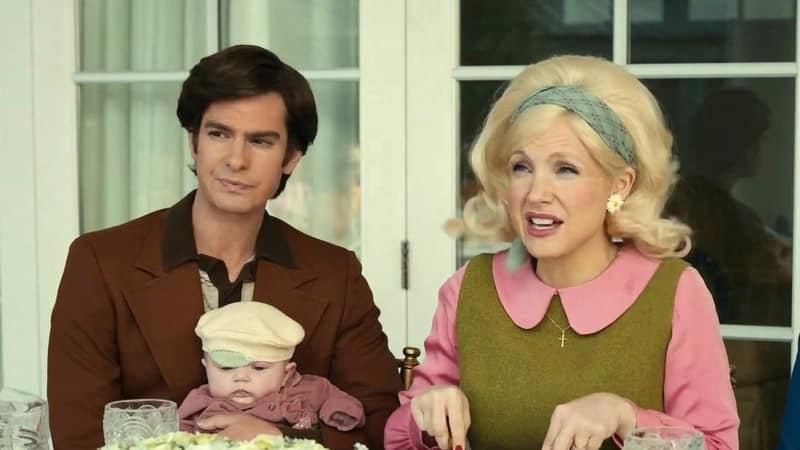 Is that Bradley Cooper waving his bare ass out at the pool again?!

When Tammy Faye (Jessica Chastain) met Jim Bakker (Andrew Garfield) at college, it was if a higher power had brought them together. Both devout Christians, it wasn’t long before they were married.

Jim was extremely ambitious, and wanted to do more than just become a local preacher in a small town church. He saw a bigger picture, literally, for both of them, with them spreading god’s word on television.

It soon became a reality when the pair created the Praise The Lord Network, which allowed them to deliver the word of God the way they wanted to; for Tammy Faye that included puppetry and singing, which was her other passion.

The success of the network was truly impressive, so much so that it lead to the couple living a lavish lifestyle, with Jim dreaming of even bigger projects like a Christian version of Disneyland. Even though they had the almighty on their side, the press were starting to question where all this money was coming from exactly? 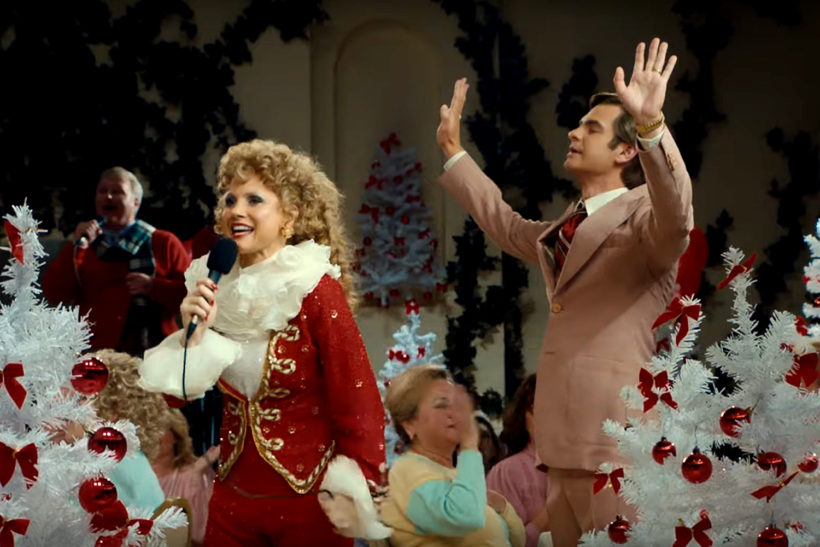 Something grabs a hold of me tightly, flow like a harpoon daily and nighly. Will it ever stop? Yo, I don't know.

With the press cheekily dubbing this scandal Pearlygate, the fall of these TV evangelists was big news. Although to think that they were the only TV evangelists who profited in a dubious fashion from their TV audience congregation would be somewhat naive. But if you get caught with your fingers in god’s kitty, you should expect some kind of wraith.

Director Michael Showalter’s film is surprisingly sympathetic towards the couple, and certainly where Tammy Faye is concerned, as she allegedly new very little of where all the huge amounts of money they were making from telethons and the like was going. She certainly wasn’t convicted of anything at the time, so perhaps there is a God after all.

It’s this rose-tinted presentation, with Tammy Faye coming across as almost a victim herself, that’s a little disappointing. Very little is made of the scandals that took place, seemingly brushing them under the carpet much like the couple did in real life, but that doesn’t feel like the film is doing the story justice. Nor those members of their congregation who were ripped off by donating money to support their lavish lifestyle. There was also a story at the time regarding a claim of alleged rape committed by Jim Bakker, with the accuser paid off for their silence, which is completely ignored by the film.

The film’s portrayal is almost as if the couple stumbled their way into fraud, instead of them being more like the Bonnie and Clyde of TV evangelists.

That said, historical accuracies aside, this is a fascinating story, made more so by a sublime performance by Chastain. It’s one of those roles where the actor goes so deep, it’s almost as if the real-life Tammy Faye inhabited Chastain for the duration of the shoot, which is more than possible considering the material, as well as the fact that Tammy Faye has been dead for fifteen years.

However Chastain managed to bring her character to life, as it were, as she is just phenomenal. There’s a visible transformation that Tammy Faye goes through, as she becomes more and more the entertainer, with her extraordinary make-up, which became such a talking point and also her trademark, becoming the mask she would never take off.

It’s a film then not without its faults, that will no doubt find forgiveness in some quarters, but its Chastain’s performance that is indeed praise-worthy, that could well be rewarded with gold during award season, god willing.