If ever there were a director that suffers from a split personality/ego, it’s Guy Ritchie. On the one hand, you have the supposedly down-to-earth geezer, writing and directing colourful Brit pics such as Lock, Stock and Two Smoking Barrels and Snatch.

And then you have the Brit director on his travels, having misadventures Stateside with the likes of Sherlock Holmes and The Man from U.N.C.L.E.

His latest feature serves almost as a hybrid, and although it sees him returning home, that doesn’t necessarily mean a return to form. So you really were naked playing those bongos huh?

Having earnt a scholarship to study in the UK, American Mickey Pearson (Matthew McConaughey) found himself staying in old Blighty and building himself quite an empire. He’s reached that point in his life however, when he feels like it’s time to move on and sell his business.

Now ordinarily, this wouldn’t be that difficult a situation, but Mickey’s bread and butter operation for a number of years has been that of growing and selling marijuana.

Having approached a buyer, with a significantly large but justified figure, Mickey is hoping for a trouble-free transaction. The outcome however, is anything but.

When one of his farms gets raided, the situation quickly escalates with blackmail, deception and a fair amount of aggro for himself, his wife Rosalind (Michelle Dockery) and his right hand man Ray (Charlie Hunnam) all on the imminent horizon, as Mickey quickly attempts to remind one and all who exactly is boss. 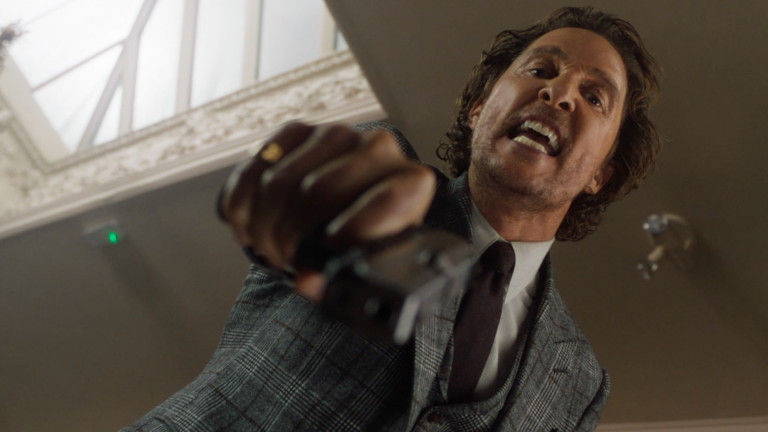 Don't worry guys, those chips will be ours.

After about half an hour into Ritchie’s film, the initial impression is that it’s an impressive lesson in storytelling. The spunky dialogue is flowing like punches in a Bruce Lee film, with plenty of wit and humour.

And as entertaining as all this is, particularly whenever Hugh Grant is on screen doing an outrageously entertaining turn, over the half way mark it may suddenly dawn on you that the story is all a bit pony. All the attention has clearly gone on what is being said by the characters, at the obvious expense of a disappointing plot.

It’s impressive in one sense how a story can feel so terribly dense, and yet simultaneously vacuous. The film is full of characters, possibly too many, as many lack Ritchie’s usual sharp definition. Even McConaughey seems a little vague and lost at times, with the hullabaloo taking place around him.

Perhaps Ritchie was over eager to impress and please; yes an energetic script set in London’s drug world sounds the perfect stomping ground for him, but there’s a tangible sense of the director simply trying that little bit too hard.

Despite the Gentemen-ly behaviour the title suggests, the film is overall a little too rough around the edges.