The Golden City concludes the mind-bendingly brilliant Fourth Realm trilogy  that is, unless John Twelve Hawks feels inspired to follow in Douglas Adams footsteps, and write a trilogy in five parts (and we rather hope he does). We say he, but we dont want to be presumptuous: Twelve Hawks could well be our most reclusive contemporary author, a bit of a Banksy in that respect. Twelve Hawks is a pseudonym, his real name unknown; he has reportedly never met his editor; and communicates with the outside world only via the Internet or a satellite phone with a voice scrambler. John Twelve Hawks, famously, lives off the grid. 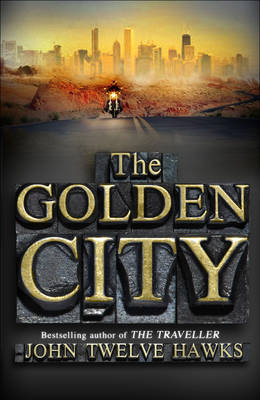 The overall story sits somewhere between truth and fiction, cultivating in the reader a deep unease of our new surveillance society. In the Fourth Realm trilogy, Twelve Hawks skilfully blends sci-fi with philosophy, to produce a truly inspirational masterpiece. Fans of Pullmans His Dark Materials trilogy wont be disappointed, though where we might rate his work a PG, the Fourth Realm trilogy should probably get an 18 certificate for its violence and adult themes.

Its probably fair to say that if you havent read the first two instalments in the trilogy  The Traveller and The Dark River - then it may well take you a while to figure out what on earth is going on in The Golden City. Twelve Hawks doesnt help these poor fellows by including a bit of a recap in the form of a prologue, or anything like that here, although he did (in a way) for The Dark River. As such, we feel duty-bound to try and fill you in on some of the most important parts of the preceding story, since they all intermingle and reach a crescendo in the final instalment.

First of all, our world constitutes the fourth realm, out of a total six  ranging from the realm of the Hungry Ghosts (number one, a bit like hell) to the realm of the Golden City (number six, a bit like heaven). These worlds are parallel to our own, and only certain special individuals  Travellers  can cross between them. Travellers have existed throughout history, and have always been persecuted as a result of their ability to transcend the limitations of our current existence and take a more philosophical approach to life  considered disruptive to a harmoniously obedient society by those in power in different periods of history. This persecution has led to a longstanding effort led by those in power to exterminate the Travellers. Being ethereal and philosophical types, Travellers tend not to be especially good at protecting themselves from these attacks and so a group of people - Harlequins - have vowed to protect them. Harlequins are lean, mean, killing machines, trained from an early age to efficiently slay all who pose a threat to their Traveller. In the present day, the Brethren  or Tabula  are working on creating a powerful Vast Machine that can monitor every individuals every move, and so control them and maintain the kind of order that keeps them in power. Unlike Twelve Hawks, were all part of the Vast Machine  every movement is followed by surveillance cameras; every telephone call or email message is monitored; even every journey or every purchase made is logged ¬¬in massive databases that can be used to trace our every move. Travellers and Harlequins stand opposed to the Vast Machine and to the Brethren, and these two sides are locked in an epic and imaginatively violent battle.

The first book, The Traveller, introduced us to Maya (a Harlequin) and two Travellers, Gabriel and Michael. Whereas initially neither brother knew of the existence of the realms or the Travellers or the Harlequins, this soon changes when Maya turns up. She explains that their absent father, Matthew, was a Traveller and that both Gabriel and Michael may have inherited his ability to cross into the other realms, leaving them vulnerable to extermination by the Brethren. Similarly, Mayas father was a Harlequin (named Thorn)  but where hers shows up dead in the first book, Gabriel and Matthews father shows up very much alive in the third  albeit in a different realm, from which he shows no signs of budging. Throughout each book in the trilogy, the Brethren pursue the Travellers and the Harlequins attempt to evade them. In The Traveller, the Brethren successfully capture both brothers, although Michael chooses to stay on the side of the bad guys when Maya effects a rescue of Gabriel. In the first novel were introduced to a range of friends and foes, two of which  Victory From Sin Fraser (aka Vicki) and Hollis Wilson  become integral characters in books 2 and 3.

In The Dark River, Gabriel is still on the run from the Brethren with Maya, Vicki and Hollis, who hole up in an apartment in New York. Here, the relationship between Gabriel and Maya begins to blossom, though as a Harlequin she is forbidden from having any kind of romantic entanglement with a Traveller. At the same time, Hollis and Vicky also get romantically involved, and all this romance has rather devastating consequences. Gabriel becomes obsessed with finding his father, which leads them all into very dangerous situations. Gabriel follows a trail that leads him to look for his father on a remote island off the Irish coast. Matthew Corrigan is, indeed there  or at least his body is  and so Gabriel crosses over into the realm of the Hungry Ghosts (the first realm) to find him, and is trapped there. Maya, desperate to rescue him, finds a way to cross over into the first realm, but in rescuing him traps herself. Gabriel responds by trying to find a way to rescue her, leaving others vulnerable to attack  and leading to Hollis taking on the role of Harlequin. Without giving too much away, The Golden City involves healthy dollops of love and loss; adventure and excitement; fear and paranoia; violence and slaughter; and an ending that is nicely ambiguous.

There were a couple of points in The Golden City that a fact checker might have wanted to investigate  especially relating to London  including references to the Millennium Wheel (no! Its been called the London Eye for years); the beech trees in Russell Square (no! Last time we checked theyre all London Planes); Blackfriars Pub (no! Surely you mean The Black Friar pub?); and Waterloo station being at the other end of the bridge over the Thames from Blackfriars (no, no and thrice no: thatll be London Bridge station). Now weve got that little bit of pedantry out of the way, we can happily report that this  like its predecessors  is an awesome page-turner, leaving a lasting imprint in the reader. Were certainly feeling more inclined to pay for things in cash and avoid CCTV, at any rate, though probably wont go to the extremes that Twelve Hawks has in order to extricate ourselves from the Vast Machine. The prose might not always be sharp and beautiful, but the tale that Twelve Hawks tells truly is.

Fans of the Fourth Realm trilogy shouldnt be too despondent at its conclusion. You can find related writings and even other Twelve Hawks fans (and, perhaps, Twelve Hawks himself) in all sorts of cyberplaces: www.johntwelvehawks.com and www.resurrectionautoparts.com are both worth a look.

Where wed happily give The Traveller eleven out of ten, The Golden City - a little like The Dark River before it  lacks some of the initial dazzling brilliance and fast pace. Its still a thought-provoking and very rewarding read, however, and one not to be missed.