It’s common knowledge that musicals are the devil’s work. If what happens in musicals happened in real life – people suddenly bursting into song for no apparent reason – either someone would have to invent a mute button we could use on them, or it would have to be considered a criminal act, with anyone committing the crime to be slung in prison for life. The obvious downside to the latter is, of course, that someone is bound to make a musical about it, with songs being belted out from behind bars, and that wouldn’t do at all.

And despite there only ever been two tolerable musicals ever made in the history of cinema (which were Grease and The Rocky Horror Picture Show, obvs), they occasionally still manage to squeak their way into existence. This latest one then, focuses on legendary showman PT Barnum. 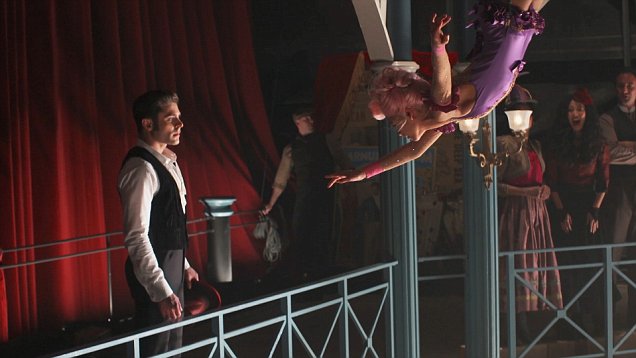 Despite coming from humble beginnings, P.T. Barnum (Hugh Jackman) never stopped dreaming big. He started off marrying Charity (Michelle Williams), his childhood sweetheart, and then having two daughters. Career wise however, he wanted more. After losing his job in a bank, he chose to see it as a positive move, and a real chance to be involved with something he really loved: to entertain.

Securing a loan, inadvertently, from the bank, Barnum decides to buy a museum, one devoted to various curiosities of the world. It’s an interesting concept, but with the majority of exhibits stuffed, it was missing one key ingredient – life.

It’s then that he decides to recruit some gifted individuals, including a real life Tom Thumb (Sam Humphrey), a bearded lady (Keala Settle) and trapeze artist (Zendaya), to help bring the punters in. But even with a show like no other, many locals want the ‘freaks’ out. It doesn’t deter Barnum however, from wanting to improve by putting on the best show ever. But at what cost?

I knew I should have kept those 50p's for the meter.

With the opening song pretty much containing Barnum’s complete back story, including the death of his father, there is a glimmer of hope that this whole film could be done in three or four songs, but alas no. Although they don’t exactly come thick and fast, there’s enough of them to get under your skin, one way or another.

What soon becomes evident however, somewhat remarkably, is that the songs end up being the best parts of the film.

You would think that a film set in this vibrant and exciting world would dazzle from one scene to the next. It doesn’t. So much so that there have been Punch and Judy shows put on in local parks that are far more entertaining.

Clearly director Michael Gracey was the wrong man for the job; up until this debut, all he had managed to direct were two music videos: one for the Sugababes in 2003 and one for Natasha Bedingfield in 2004. Not exactly the most glowing CV then, and how it inspired the producers to hire him is anyone’s guess.

The material is ripe to provide amazing set pieces, but sadly they never materialise. The biggest surprise is how Gracey managed to produce a film about a legend in the entertainment world that is completely devoid of spectacle. It would be like attending a Cirque du Soleil performance that solely featured a person narrating Southern Rail’s 2018 timetable.

It’s a film that’s crying out to have been helmed by the likes of Baz Luhrmann; even if it failed to live up to his best work, it would have still been a better albeit flawed effort over this.

It’s biggest failure however, is not being able to get the very best from a talented cast, including Zac Efron.

With many of the songs actually being quite bearable, it’s disappointing that such a tired and generic script let the rest of the show down.