It’s that time of year, when there’s a chill in the air, decorations are going up and children are writing their lists for...wait, hold on, it’s March you say? No Way?! But this film is festive, full of snow, joy and lights, there’s no sign of bunnies and choccy delights.

With Easter the next break to look forward to, it just feels weird watching a Christmas flick in March. But that’s exactly what you’re getting with this animated release, based on the classic How the Grinch Stole Christmas!, by everyone’s favourite GP, Dr. Seuss. 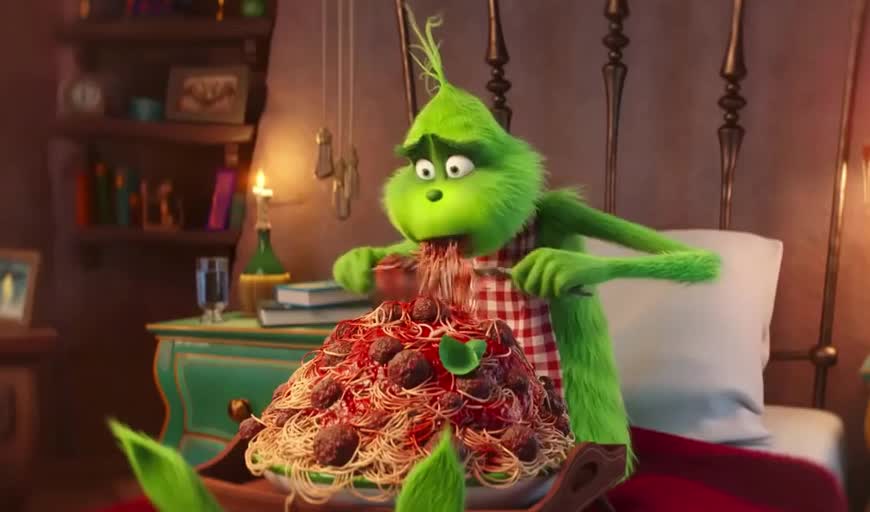 I'm still not entirely convinced this is the best meal to have an hour beofre a marathon.

All of the town of Whoville are preparing for the imminent arrival of Christmas – all except one. Living on a hilltop, overlooking the town, is the Grinch (Benedict Cumberbatch). He’s not big on socialising and even less interested in yuletide fun.

One day, when forced to pop out on an emergency grocery trip, Grinch discovers that the mayor has decreed that he doesn’t just want the town folk to go big this Christmas, he wants them to go three times as big.

This fills the two thirds smaller heart of the Grinch with dread, so he decides to do something about it: he’s going to steal everyone’s Christmas! Now tell me this guy should be allowed 'round children.

It’s completely understandable that with a title getting a cinematic release in time for the festive period, its Home Entertainment release follows roughly three months later. But there’s something inherently wrong with sitting down with an all out Christmas flick in March. It’s like eating a mince pie and listening to Christmas songs in July, you just don’t do it.

That said, the animation is of a high calibre; the flow of the Grinch’s fluff in particular, reminiscent of Sullivan from Monster’s Inc, appears to have a life of its own. It’s also very bright and festive, sparkling with Christmas lights throughout. And if you still have the 3D set-up alive and kicking, then that version is definitely recommended.

The Grinch’s relationship with his dog Max, is also endearing. And it’s nice to see his back story too, giving an insight into why the character is so grinchy.

The one irritation, other than the obvious seasonal conflict, is the children’s voices; they’re the type used that sound as if they have been soaked overnight in the richest of treacle, such is their syrupy delivery. Sufferers of Diabetes then, should stock up on insulin shots to get them through it.

It may not be that suitable for this time of year, but The Grinch is most certainly worth inviting into your yuletide home, so pop it on your list now.