One disappointing blockbuster after another. Thanks 2011. As if the weather wasn't bad enough, audiences were subjected for the most part to dire Hollywood fare. But as luck might have it  Irish or otherwise  there may well be light in gloomy cinemas yet. And considering the lack of blockbusters actually worth seeing this year, this little Irish film may well get the kind of audience it so deserves.

In a sleepy part of West Ireland, Sergeant Gerry Boyle (Brendan Gleeson) is a member of the police constabulary. The irony is however, that as a law enforcer, hes far from being law-abiding himself. But despite his vices of drugs and prostitutes, hes still pretty good at his job.

Hes called out to one particularly violent crime; a man is found with a bullet in his head with the number five and a half written in red on a wall above him. Its not his usual kind of crime, but hes eager to get to the bottom of it.

Later, he finds himself in a briefing with a genuine agent from the FBI, Wendell Everett (Don Cheadle); hes on the trail of drug smuggling gang, who are apparently heading to Ireland with half a billion dollars worth of drugs in tow.

One of the men Everett reveals in his briefing, just so happens to be the man Boyle found dead earlier. This leads Boyle and Everett into a slightly uncomfortable partnership, as the odd couple take the lead in this curious investigation. 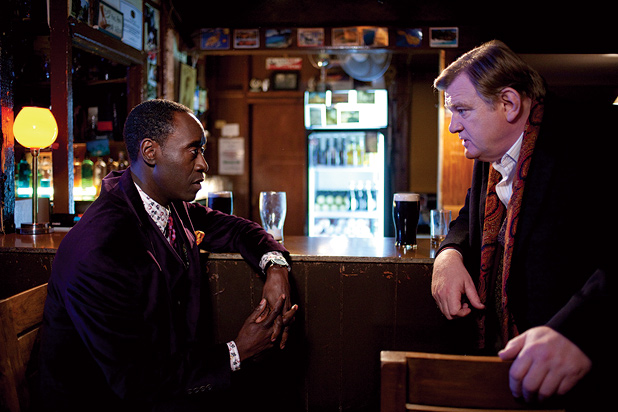 I'm not going to argue with ya Don, it's your bloody round so get the drinks in!

If youve spent most of your time sucked into the regular budget-busting fare of the cineplexes of late, you may well find the low-budget look of The Guard a little unnerving at first. You should stick with it though, as you will be rewarded with some excellent performances and a script littered with great dialogue and an absorbing story.

Making the film the delightful experience it is however is Brendan Gleeson. The key to Gleesons success is in making his character a real character, without resorting to any racial stereotyping. As Cheadles character soon learns, Boyle is quite an enigma; hes flawed on quite a few levels, but it doesnt make him bad at his job. He also may have been part of the Olympic swimming team in Seoul, he may not. Its not so much about believing him as in believing in him.

Kudos must be given to Cheadle. Hes given an executive producer credit, so probably helped out with the film more than he needed to. More importantly though, with his Hollywood weight, he could have easily built up his role to equal that of Gleesons, but instead he does the honourable thing and just lets Gleeson go about stealing the show.

John Michael McDonagh directs his characters with real dynamism, as well as being able to get across a real flavour of who they are in a short amount of time. Not only is this is directorial debut, but he also wrote the screenplay. Its an impressive combination, thats for sure.

What hes managed to create is part post-modern western, part unusual cop buddy flick. Its a mix that is literally as bonkers as it plays out.

He makes a few mistakes however; for one he spends a little too much time on a female Croatian character, and also Mark Strongs character is a little out of synch with everyone else, but these really are minor niggles.

The Guard is a great antidote to all the summer 3D letdowns. Its full to the brim with an almost indescribable charm and is just the kind of reminder cinema audiences need that big does not equate to clever.

If youre looking for a good night out, its the perfect craic.