You can imagine that starring in a show about wrestling as Betty Gilpin does (playing “Debbie Liberty Belle” Eagan in Glow on Netflix), she puts a shift or two in at the gym.

Well, she hasn’t let any of that hard work go to waste, as she’s managed to bag herself a kick-ass role during the show’s hiatus, where she most definitely gets to get her guns out for this darkly comic horror. 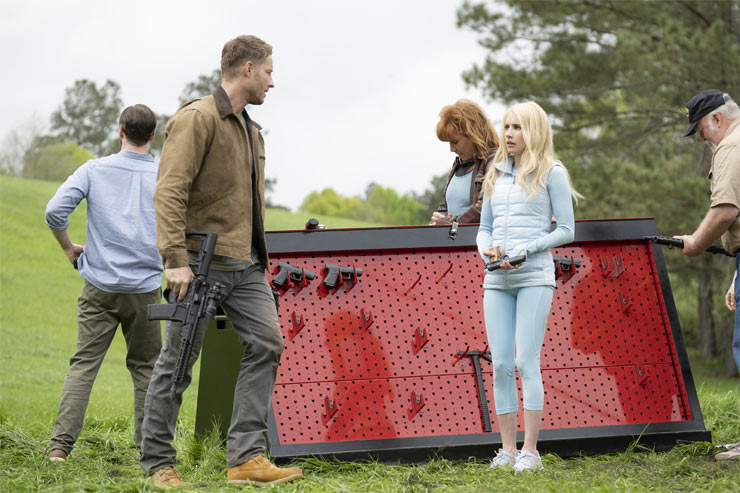 So besides this, I volunteer feeding the homeless at weekends.

As anyone who has had one too many alcoholic beverages may know, waking up in an unfamiliar place can be very disorientating. Imagine then how worse it would feel, that when you did wake up in a strange space, someone was also shooting at you.

This is exactly what happens to twelve strangers, who, after being drugged, find themselves being shot at in a field.

If there was an opportunity to chat, and perhaps discuss the reason for them being, well, wherever the hell they are, they probably would, but it’s difficult to have any conversation when you’re being shot at.

The one thing they can agree on however, in the short time they’ve shared, is that it feels very much like they’re all being hunted. But by whom and why? 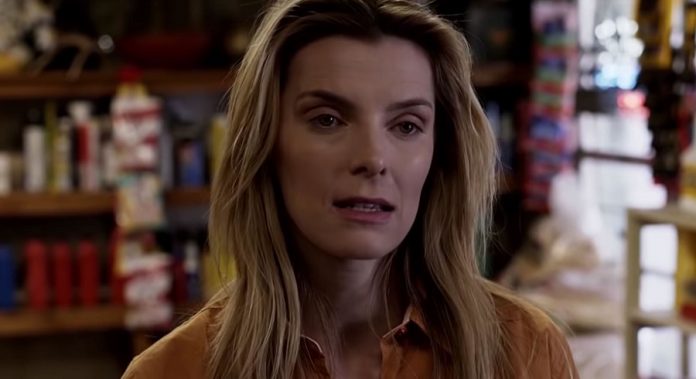 I love that you're a fan, but I really don't wrestle out of work time.

The Hunt is very much one of those films that the least you know about it, the better. All you need to know is that it shares similar ingredients to titles such as The Purge and The Hunger Games.

It’s fair to say that it works on a few levels. First there’s the most obvious, as an out-and-out horror title. The film is pretty much split into two halves, with both working exceedingly well.

The first cleverly creates a similar feeling of disorientation that the film’s protagonists are under, by not really having a central character to follow. With no-one really standing out as someone to root for, it’s difficult for an audience to get behind one individual.

The second half offers more clarity, with the predominance of Gilpin’s character Crystal; she’s a tough, no nonsense Southern gal, who, unsurprisingly, doesn’t take too well to being shot at. She’s not just a female Rambo however; Gilpin’s performance is intricately subtle in places, giving her character a surprising amount of warmth and depth.

The film also works on its other level, as a social satire. The key to the film also happens to been an allegory for fake news, or more to the point, how dangerous it can be. It gets a little stretched in places, but for the most part it works.

The result is a deeply warped black comedy that is an hour and a half car crash of entertainment. It’s undoubtedly ridiculous, and yet sublimely so, and is the perfect adrenaline shot during these troubling times.

As welcome distractions go, they don’t get more outrageous than this.