It must be great to be a Gyllenhaal. It doesn’t matter which one really, Maggie, or younger bro Jake; whenever either of them pop up in a film, you know it’s worth a watch, just because one of them is simply in it.

You just know that they’re supportive with one another too, regardless of the project they’re working on. They probably send a really cool fruit basket on the first day of filming to wish you luck – imagine that – good luck fruit!

Here, Maggie, who has been dipping her acting toes in TV waters of late, with a regular role in the highly watchable The Deuce, turns her attention to this Netflix distributed title, which gets a big screen outing here in the UK. Living and working in Staten Island is Lisa (Gyllenhaal); she lives at home with her hubby Grant (Michael Chernus) and their two grown-up children. During the day she’s Ms Spinelli, teaching young children in kindergarten, and by night she’s started attending a poetry class.

She finds herself slowly becoming immune to home life, as the disconnect between her children and husband appears to be growing ever wider. The poetry is an attempt to be accepted as a creative person, although her poetry isn’t exactly getting her classmates or teacher’s juices flowing.

One day, whilst at school, five and a half year old Jimmy (Parker Sevak) begins to recite something in an empty classroom. Lisa catches the end of it and is mesmerised. She believes that Jimmy is truly gifted with the ability to write poetry. Her passion to get others to recognise this gift however, begins to blur the lines of acceptable behaviour between teacher and pupil. 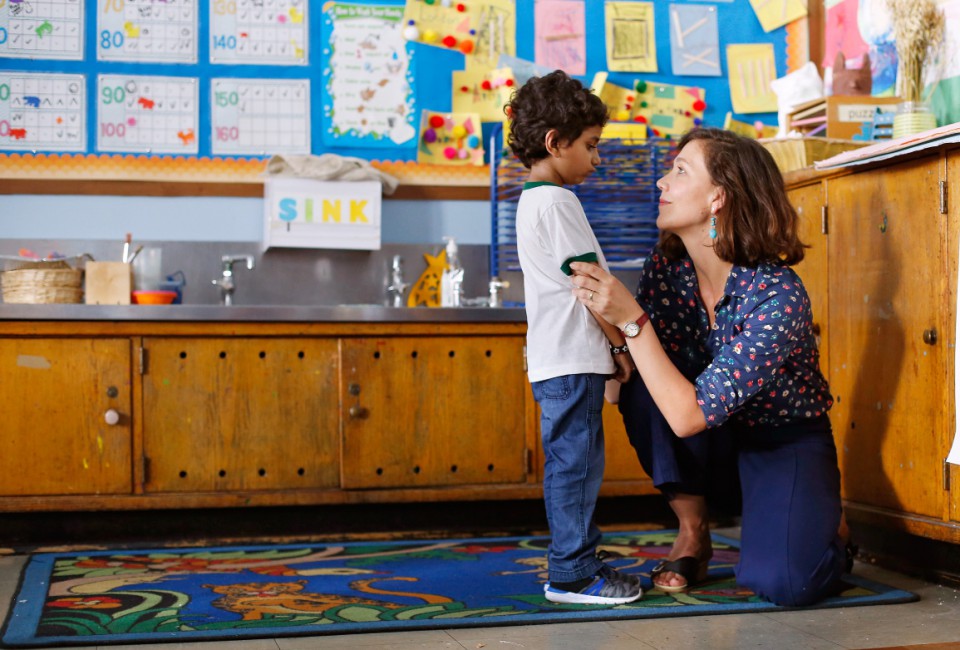 "Don't worry, it's a trust exercise, Harvey's right behind you..."

Sara Colangelo’s film, which is based on the 2014 Israeli feature of the same name, is one that that could make audiences a little nervous as to where it’s going. This sensation is only heightened by Gyllenhaal’s intelligent performance.

It could be glibly described as a creepy Dead Poets Society, but instead of one teacher inspiring a whole class, you have Gyllenhaal’s character focusing all of her attention, not all of it welcome, on one very young student.

It often feels that it’s tiptoeing back and forth into very dark areas, with the ability to completely bolt into the darkness without any notice if it so chose. And it’s Gyllenhaal who is constantly forcing the audience to not only second guess her motives, but also what she will do next. It’s this thin line of intrigue that holds the film together throughout.

With closer examination her character’s actions could no doubt be open to various interpretations, but ultimately it’s a story about a women lost in her life, feeling that she has little contribution to make at home or her work life. Lisa sees Jimmy’s natural talent as a lifeline for her, one way or another, to be noticed once again, and to have her existence acknowledged. Right up to the end, Gyllenhaal keeps her emotional cards tight to her chest, despite her warped actions.

It’s this subtlety and lack of clear intention by Gyllenhaal that makes this a fascinating albeit slightly disturbing watch. One that would most certainly guarantee a thumbs up from supportive sibling Jake, that’s for sure.