The King of Staten Island

The name Judd Apatow may well be one of the most well known names in Hollywood – that hasn’t been associated with heinous acts against females thankfully – but its more for his producing credits than directing.

Wearing his producer hat, Apatow has behind such flicks such as Anchorman: the Legend of Ron Burgundy, Superbad and Bridesmaids, to name just three.

For his latest stab at directing, he returns to more familiar ground, that of the coming of age genre. Are you sure a hose is the right approach for a jumper?

Living on what many consider the least sexy part of New York – Staten Island – is stoner Scott (Pete Davidson). His home life is about to be severely disrupted as his sister is leaving home for college. As his father, a fire fighter, died in the line of duty when Scott was only seven, he will only have his mum Margie (Marisa Tomei) to look after him.

To be fair, he should be able to look after himself, seeing that he’s 24-years-old, but Scott struggles with, well, life itself.

Things become even more chaotic at home, when his mum has the cheek to start dating again, even though it’s only been 17 years since his father died. To complicated matters, her beau Ray (Bill Burr), also happens to be a fire fighter.

With Scott cruising, in no particular direction up until this point in proceedings, these changes violently disrupt his casual outlook, forcing him to re-evaluate what the hell he’s going to do with the rest of his life. 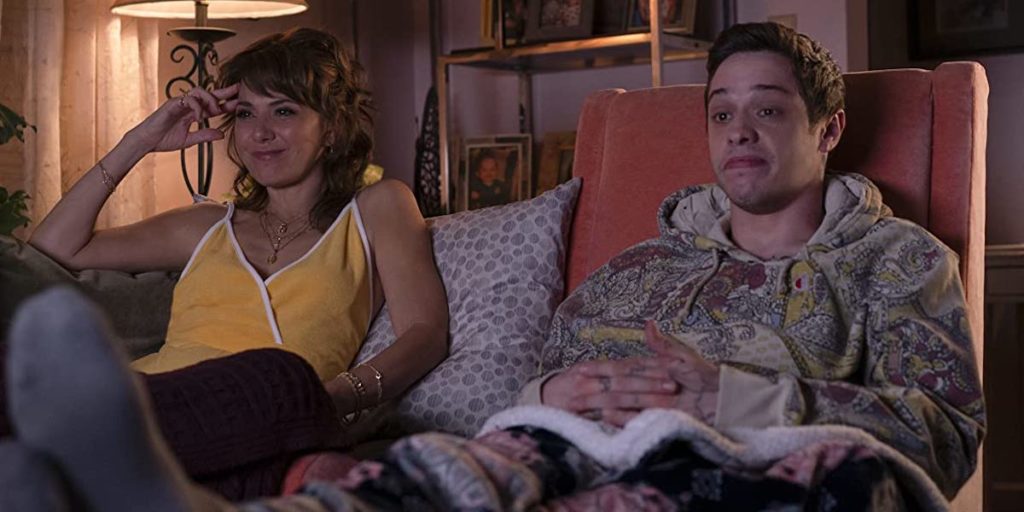 I'm watching TV with Marisa Tomei, can life get better than this?

The most important element to the coming of age flick – as Apatow knows full well – is that your main protagonist is king. Ironically, despite the film’s title, his main character is anything but. Davidson’s Scott is someone who is unequivocally impossible to love. Even if you take away the fact that he’s a stoner living at home at the age of 24, he lacks any kind of charisma that would want you to root for him.

To make matters worse, Apatow surrounds him with characters that are both far more interesting and endearing. There’s his occasional girlfriend Kelsey, played brilliantly by Brit Bel Powey, whose dream of making Staten Island a better place to live is a far more attractive story. And then you have his mother, featuring the ever-wonderful Tomei; her character’s plight again is far more intriguing than Scott’s. And then you have any of his friends he hangs out with. And then you have just the few brief scenes that Steve Buscemi pops up in; we know very little about his character, but even finding out more about him would have been a far better journey.

Apatow certainly doesn’t do himself – or his audience for that matter – any favours, by having the film drag its heels for an hour too long. Its two hour and 16 minute duration only cements the boredom that comes with it.

He clearly even throws in a botched attempt at theft in the latter stages, in a last ditched attempt to inject some excitement into proceedings, which has no discernible impact on the main protagonist. There are also scenes set in the fire station that producers of Chicago Fire would have swiftly dismissed for being subpar.

Unfortunately for Apatow his latest venture is neither as funny as it should be, nor as dramatic as it wants to be, meaning that it fails royally on all fronts.