With such a drought of not only new games, but next-gen titles exclusively, gamers are crying out for new titles to play on their next-gen machines.

Developers Bloober Team must have had the foresight to see what was coming however, being canny enough to release their psychological horror title The Medium at just the perfect time. 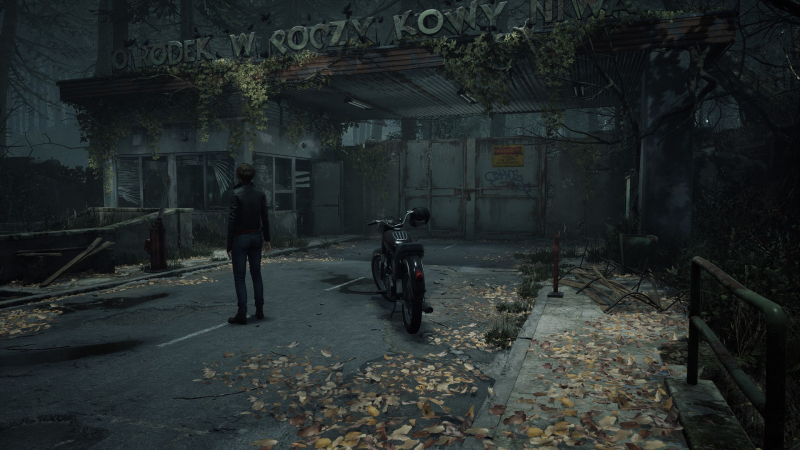 The pandemic had certainly taken its toll on Alton Towers.

Helping to set free troubled souls is Marianne, a spirit medium, an occupation that can be just as much of a curse as a gift. Just as she’s dealing with some personal issues, she gets a call from a stranger, who is not only aware of her abilities, but also knows how she came to have them.

If she wants to satisfy her curiosity, he tells her that she must meet with him at the Niwa Workers’ Resort, and Marianne agrees.

The resort, once a popular holiday hotspot during Communist rule in the Polish countryside, is now abandoned and has seen better days.

Once there, Marianne’s powers go into overdrive as she pieces together the dark and murky history of the resort, encountering the many innocent souls trapped there as she does, who were murdered in the massacre that took place there years earlier.

But as Marianne soon discovers, they aren’t the only entities that lurk in its corridors, as she can sense an overwhelming presence everywhere she turns, very much keen on making her acquaintance. 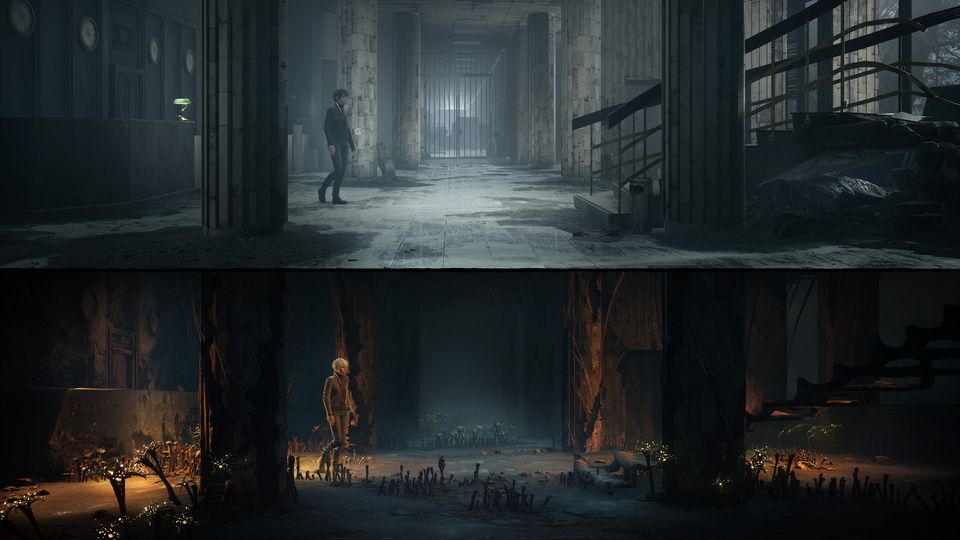 Ever get the feeling you're walking in someone else's shoes?

Much like its main protagonist, The Medium is a game that very much straddles two worlds. It may well be technically a next-gen (/this gen) only title, but it also happens to be a truly old school experience.

The most noticeable aspect for many will be its fixed camera system. It is a system that will frequently cause mild cases of hysteria for many, with your character walking through a door in one direction, only to appear jarringly elsewhere on the screen as the scene cuts to the next room. Anyone who has played the likes of the original resident Evil series will be all too aware of this system, with its restrictive movements within the screen. It’s certainly a part of the game that some may take some time getting used to, but at least it’s made more accessible in that your character has no weapons in which to kill enemies with, making it feel slightly more old school.

To that end, the game is more akin to a classic point and click adventure than a modern horror experience. You will often walk into a room, and you will be searching for a white marker of some kind to pop up within your restricted area, which you will be able to interact act with. It will either be an item to help you exit your current room, on its own or in conjunction with another item, or it will be a letter or a postcard that helps to give the story a little more colour. It’s a fairly basic puzzle technique but it works well enough in this set up.

Where it sets its next-gen credentials on however is its mildly impressive split-screen exploits. In the game you get to play as Marianne in both this and the spirit world at the same time; this will often have this world Marianne on the top half of the screen, and spirit Marianne immediately below, with you controlling both at the same time. The environments are mapped out the same, although obviously appear visually differently, with the spirit world looking the worse for wear, dipped in several layers of evil as it is.

Again this is another element that takes some getting used to, as you attempt to monitor both your playable characters at the same time, which is probably why this particular mechanic isn’t overly used. Still, it becomes a clever aspect of problem solving, with each character within the same environ searching for items to help the other character out.

Thankfully the develeopers appear all too aware of its gimmicky nature, and therefore don't shove it down the gamer's throat at every opportunity, instead choosing to use it, wisely, fairly sporadically.

Within this set up, mirrors are also used as portals, which add to the puzzling experience, With Spirit Marianne being able to access other areas that this world Marianne cannot.

It’s probably these split screen shenanigans that make it a next-gen only game, as it’s certainly not the animation of the main character. Whichever version of Marianne you’re playing has a stiffness in her movements, particularly when she is running which she has great difficulty in doing, having the appearance of someone carrying a recently boiled egg between her buttock cheeks, determined not to break the shell as she moves. It’s an extremely awkward look for sure, and hopefully not a trend for any upcoming next-gen characters.

Still, the rest of the game’s visual palette is suitably atmospheric, from its overgrown garden areas, to its run down interiors, although it can all present itself rather too much on the dark side; playing during the day (on an OLED HDR TV) was often challenging, with characters merging into the darkness, making moving your characters around almost an added obstacle to overcome.

One area that was – and always is – a bone of contention, is a lack of manual saves. You are therefore tethered to the developers’ idea of where a good place to save is, which may not match with yours. You can find yourself in a fairly puzzling predicament, which may take some time to solve, with your exit from that area often relying on you solving it. The more you explore, the more time you spend in the area; this lead us on more than one occasion to check the possibility of stopping the game's progress where we were, only to be informed it had been 22 minutes since our last save. So if we decided to leave at that stage, we would lose all progress up until that point. You are therefore forced into a position to get to a save point one way or another, which is far from ideal. Welcome to the next-gen indeed.

The crutch it does lean on heavily however is its narrative. It’s compelling, at least initially it is, but it is poured on rather thickly the deeper you go, where it almost takes on a life of its own, regardless of your part in it. Certainly at the game's end, which comes fairly quickly as its roughly eight hours to play through, the experience is all too story heavy, with your character left with nothing but to run awkwardly down corridors, and then endure a further bloated cut scene.

Essentially The Medium is first and foremost an atmospheric puzzler, which sees you piece together a dark past, one which you have your own part to play. There are the occasional monsters roaming the hall ways, but there is little in the way of confrontation with them, particularly as you don’t carry any kind of weapon throughout.

The Medium is not going to scare the living daylights out of you, unless you’re a very soft touch, as it’s about as far removed from being a survival horror title as can be. But if you accept it for what it is, which is almost an interactive narrative with puzzle elements, it works perfectly well and should be considered a spirited attempt at something a little different.